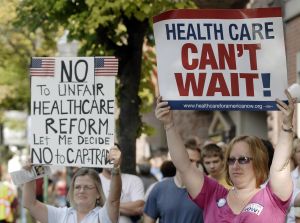 We go beyond the slogans and tell you what’s really in the bill.

PolitiFact has checked hundreds of claims about health care reform and read the plans under consideration by Congress. As the Democrats move toward a final vote, we’ve selected 10 facts about the actual health care legislation that every voter should know. Agree with the measure or not, here’s what it intends to do and where the big unknowns are. We’ve linked to our previous reporting on each issue throughout the story; click through for even more sources.

1. The plan is not a government takeover of health care like in Canada or Britain. The government will not take over hospitals or other privately run health care businesses. Doctors will not become government employees, like in Britain. And the U.S. government intends to help people buy insurance from private insurance companies, not pay all the bills like the single-payer system in Canada. The key parts of the current U.S. system — employer-provided insurance, Medicare for the elderly, Medicaid for the poor — would stay in place. The government would create health insurance exchanges for people who have to buy insurance on their own, so they could more easily compare plans and prices.

2. Insurance companies will be regulated more heavily. They will be told the minimum services they must cover, including preventive care. They will have to pay out a certain percentage of premiums for patient care. By 2014, when the exchanges open, insurers won’t be able to deny customers for pre-existing conditions.

3. Everyone will have to have health insurance or pay a fine, a requirement known as the individual mandate. The government intends to cap premiums for people who make below a certain income. For people who buy insurance on the exchanges, a family of four making $88,000 would have a cap of 9.5 percent of their income. Lower incomes would have lower caps. The fine for not having insurance would be a minimum of $695 per person per year, with exemptions for financial hardship and other special cases.

4. Employers will not be required to buy insurance for their employees, but large employers may be subject to fines if they don’t provide insurance. But Congress wanted to encourage employers, especially large employers, to offer insurance. So they created a fine for employers with more than 50 workers: If those employees buy insurance on the exchanges and qualify for a low-income credit from the government, then the employer would have to pay a fine. Fines are calculated based on number of employees; for large firms, the fines could be significant.

5. The vast majority of people will not see significant declines in premiums. When President Obama talks about premiums going down, he usually means they won’t go up as much as they would otherwise.  For the 4-out-of-5 who get their insurance through their employer, the savings would land in the 0 to 3 percent range by 2016, according to the nonpartisan Congressional Budget Office, or CBO. People who buy insurance on their own, but who don’t qualify for government subsidies, could actually see their premiums rise by as much as 10 to 13 percent, but that’s largely because they’ll be getting beefed-up policies that would pay for more basic services, especially preventive care. Low-income people who qualify for new credits to buy insurance would see the biggest drops.

6. The plan might or might not bend the curve on health spending. Critics say there aren’t enough provisions to reduce waste or fraud, but Democrats say they’re not being given enough credit for new cost-saving pilot programs that could be rapidly expanded. The most recent estimate of the plan, released Thursday by the CBO, said that it would spend $940 billion over 10 years. But new taxes, penalties and cost savings would offset that spending, according to the CBO, so that overall the plan pay for itself, dropping the deficit by slightly $138 billion over 10 years. Obama has said the plan will save more than $1 trillion in the second 10 years, but that estimate, according to the CBO, is highly speculative.

7. The government-run Medicare program will keep paying medical bills for seniors, but it will begin implementing cost controls on health care providers, mostly through penalties and incentives. The legislation would reduce payments for hospital-acquired infections or preventable hospital admissions. For Medicare Advantage, the federal government intends to reduce extra payments, taking away subsidies to private insurance companies. Insurers will likely cut benefits in order to not lose profits. The bill does not address the "doctor’s fix," an expected proposal that Congress usually passes to prevent doctor’s Medicare payments from severe cuts.

8. Medicaid, a joint federal-state program for the poor, will cover all of the poor, instead of just a few groups the way it currently does. Right now, to qualify for Medicaid, a person has to be poor and also disabled, elderly, pregnant or a child. Under the new plan, all poor adults would qualify.

9. The government won’t pay for elective abortions. But under the Senate plan, people will be able to buy insurance that covers abortion on the new health insurance exchanges, as long as the insurance company pays for the services with patient premiums, not taxpayer subsidies. Medicaid has an exemption for cases of rape, incest, or the life of the mother.

10. No one is proposing new benefits for illegal immigrants. Some House members had hoped that illegal imm
igrants would be able to buy insurance with their own money through the new exchanges, but that now appears unlikely.