Last night, all but one Republican in the U.S. Senate voted against extending the payroll tax cut for 160 million working Americans and small businesses in order to protect millionaires from paying just three percent more on money they make above a million dollars. 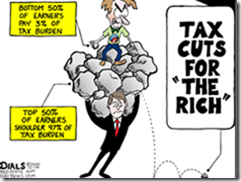 Washington Republicans put millionaire tax giveaways ahead of putting money in the pockets of ALL working Americans.

Working American families are getting crushed — our leaders need to put them first. Last night, Washington Republicans put millionaire tax giveaways ahead of putting money in the pockets of ALL working American families. They voted to make every American worker and small business owner pay MORE taxes just so millionaires can pay LESS. We all do better when we all do better. And that means looking out for all Americans, not just the wealthiest 1%.

For those who say:

"We can’t raise taxes on millionaires because they’re our job creators."

WHAT YOU NEED TO KNOW