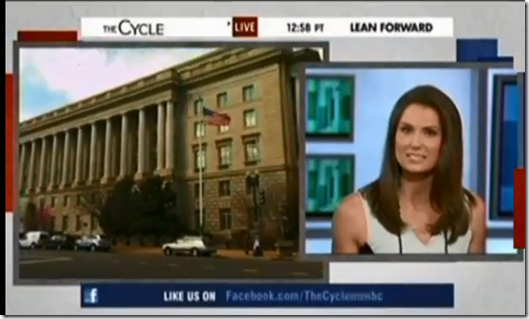 On the day Republicans shutdown the United States Government, Krystal Ball writes a parody that is at first extremely funny. It is so funny her cohorts on The Cycle cannot contain themselves. The issues she addresses are so basic and serious one cannot help but laugh in desperation that in fact a small fraction of the Republican Party, the Tea Party faction, is holding the entire nation hostage.

While it is true that the Republican Party generally and Conservatives specifically really believe in small government, for years it has been an honest ideological debate. It would be unheard of that any Party would threaten the country with assured economic destruction if they did not have their way. One loses to fight another day.

Destroying a country’s economy leaves nothing for one to fight for. Then again, destroying an economy is likely a god sent for the funders of the Tea Party Right Wing revolution. Think about the Koch brothers, Sheldon Adelson, and other Right Wing plutocrats devouring assets on the cheap from a collapse even as they pay a pittance to the ‘lucky few’ from the selected unemployment pool.

Krystal Ball paints the picture of a government free; free market capitalist Ayn Rand Libertarian America. She congratulates the insurgents that shut down the government saying,

Congratulations all you Ayn Rand loving drown the government in the bathtub Obama hating Conservatives. You are well on your way to the no government libertarian paradise of your dreams. To accomplish this goal you have overcome major adversity including repeated repudiation by the American people of your ideology and everything it stands for. You didn’t let those tiny road blocks stand in your way though. Here is a small slice of what you have achieved.

She goes on to make fun of the extrapolations of their demands; the results of no audits, no tax man, no minimum/living wage, no regulation for worker safety, no welfare, and no food stamps. She continues about the capitalistic Conservative nuggets of joy in the shutdown that Mike Lee, Louie Gohmert, and Ted Cruz’s voters supposedly sent them to Congress to champion.

She then comes back with the real hypocrisy and likely that which those that think they believe in this ideology should ponder.

If you really want a Somalia style small government paradise you still got some work to do. After-all, seniors will still get their fat government checks. They won’t be forced to eat cat food the way God intended. And that scourge of the world Obamacare which outrageously help people purchase health insurance is still the law of the land. No worries though, when you force the government to default on October 17th, there’s literally no telling what you can achieve. Sure President Obama says he won’t negotiate. But if a catastrophic debt default causes a financial Armageddon, widespread bank failures, the collapse of the stock market, the devaluing of the dollar, 20% interest rates, and 50% unemployment I bet we can get him to the negotiating table. No one is that crazy. Well, except you anyway. After-all, you love America so much that you are willing to destroy her rather than see her devolve into a disgusting, dystopian future in which – uh – I don’t even know if I can say this without throwing up. Everyone, I mean everyone has health insurance.

Folks the government has shut down. Just like the American disgust with war squelched the noise coming from the hawks and the military industrial complex pushing the US into another war, it is imperative that your voices are heard demanding not only the reopening of government but a government that is working middle class centric. The one thing they fear more than the Plutocracy is an engaged populace.