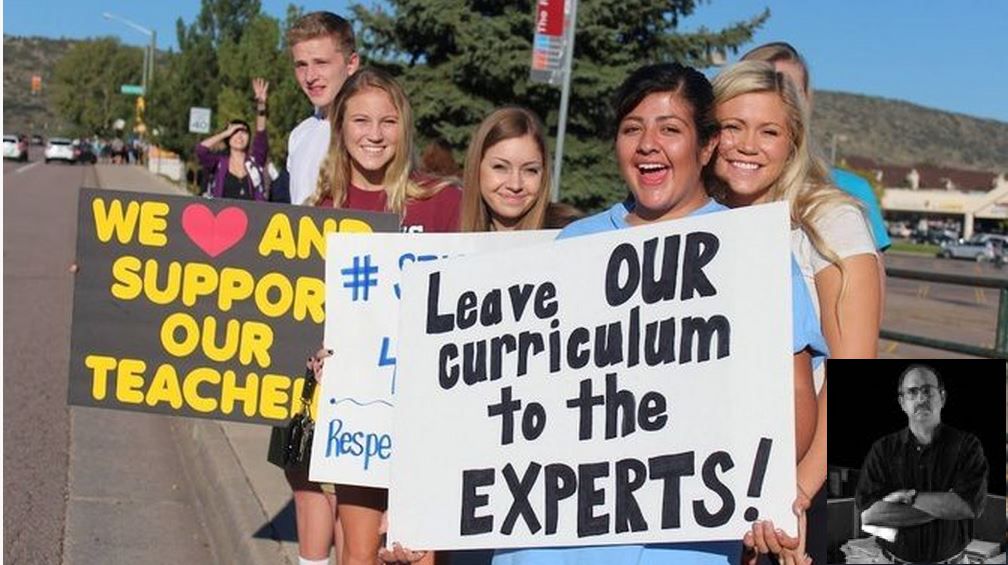 A controlling school-board clique seeks to sanitize the teaching of American history — scrub away unsightly blemishes like racial oppression and women’s liberation. Should be a piece of cake, right?

Sure, except that the students find out about it and voice their outrage loudly.

Result: The national media pays attention. The clique has cake on its face, wide eyes poking out through white frosting.

What? Who knew students wanted to think, and not be spoon-fed empty educational calories? Indeed.

Machinations by a slate of conservative schemers on the Jefferson County School Board in Denver’s suburbs have caused this. And it’s not just a few students. It’s hundreds. And the walkouts haven’t just involved uppity high-schoolers. Middle-schoolers have walked out, too.

They have two demands that are worth the fight: (1) We want history classes based on true history; (2) We want policy makers to treat our teachers with respect.

Most school boards are populated by people who buy into the concept of public schools and simply want what’s best for them. As one whose sons were educated in public schools, I marveled at the fact that these boards rarely if ever got politicized. Considering the voting-day apathy that too many parents exhibit about school governance, such bodies are always ripe for takeover by political hit squads.

Such has been the case at the state level in Texas. Hard-right Republicans, some being homeschoolers openly antagonistic toward public schools, rode into office years ago on the State Board of Education. Instead of a body that supports public education, the board became a ideological star chamber where politically vetted “experts” about everything from “creation science” to dry-cleaned social studies (gender equity being a tool of the devil) got a chance to impact what would get taught.

This wasn’t just a “Texas” story, either. As the second-largest bulk purchaser of textbooks behind California, what Texas requires of its textbooks dictates what publishers will do nationwide.

The fact is that the story about the uproar in the quiet Denver ‘burbs isn’t just a “Colorado” story, either

The three Republicans became the controlling bloc a few months ago in a low-turnout vote for the Jefferson County School Board. Immediately they set out to do what, sadly, elected Republicans do: They treat teachers as “guilty until proven innocent” on trumped-up charges of “low standards” and “refusal to reform.” They treat charter schools and “choice” as God’s gift to schooling, regardless of any evidence that said claims have a thimble-full of veracity.

And in this case they got juiced over a Republican initiative to strike out against changes in the AP U.S. history course. Conservatives say it is weighted down with those dreaded Rs: “revisionism” and “relativism.”

In actuality, the AP revisions are aimed at upper-level cranial activity, also known as critical thinking. This is something, Texans may recall, that the state GOP platform has said will not be countenanced.

Well, the Republicans on the Jefferson County board proposed to review the history curriculum so as to teach students the “benefits of the free enterprise system, respect for authority and respect for individual rights,” and purging things that promoted “civil disorder.” And what did they get? Civil disorder. The students won’t stand for it.

Predictably, the targets of the protests assert that the students are being “pawns” of the teachers union. This has made the students even more furious.

Response from the controlling clique: Rather than protesting, the students should have been in class for proper spoon-feeding.

I cannot express sufficiently how proud I am of those students who are standing up for what education is and should be. When will more people stand up against those who don’t get it?