MediaMatters aggregates some analysis on Fox News Sunday reporting on Ferguson. The bias seem directly proportional to their lack of diversity.

New York Times: “The White Police Officer A Grand Jury Declined To Indict Last Week In The Fatal Shooting Of An Unarmed Black Teenager Has Resigned.” The New York Times reported on November 29 that officer Darren Wilson had resigned:

The white police officer a grand jury declined to indict last week in the fatal shooting of an unarmed black teenager has resigned from this city’s Police Department, his lawyer said on Saturday night.

For months, some here had called for Mr. Wilson, 28, to step down or be fired following the killing of Michael Brown and the unrest that followed, in August and then again last Monday, after the grand jury decision was announced.

Adolphus Pruitt, of the N.A.A.C.P.’s St. Louis chapter, said the resignation “not only fulfills one of the demands of the protesters, but also provides for one of the steps necessary for the wholesale reconstructions of law enforcement in Ferguson.” [The New York Times, 11/29/14]

Fox News Sunday Hosted All-White Panel To Discuss Ferguson And Racial Tensions. On Fox Broadcasting Co.’s Fox News Sunday, an all-white panel discussed the developments in Ferguson and how the United States can best combat racial discrimination. The show also hosted a separate discussion with two lawyers in the case, one of whom is white, and held solo interviews on the topic. In total, Fox News Sunday hosted six white people to discuss Ferguson, and only two people of color, or 25 percent. 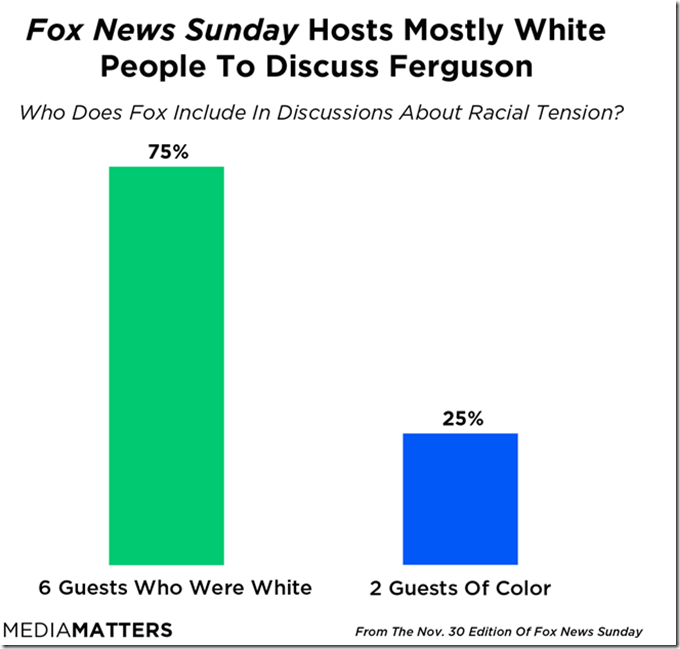 CBS, ABC, and NBC Hosted More Ethnically Diverse Guests On Ferguson. On November 30, 67 percent of guests on NBC’s Meet the Press during segments on Ferguson were people of color, or six out of a total of nine. ABC’s This Week hosted three white guests and three black guests, or 50 percent, while CBS’ Face the Nation hosted slightly more white guests, four out of a total of seven. 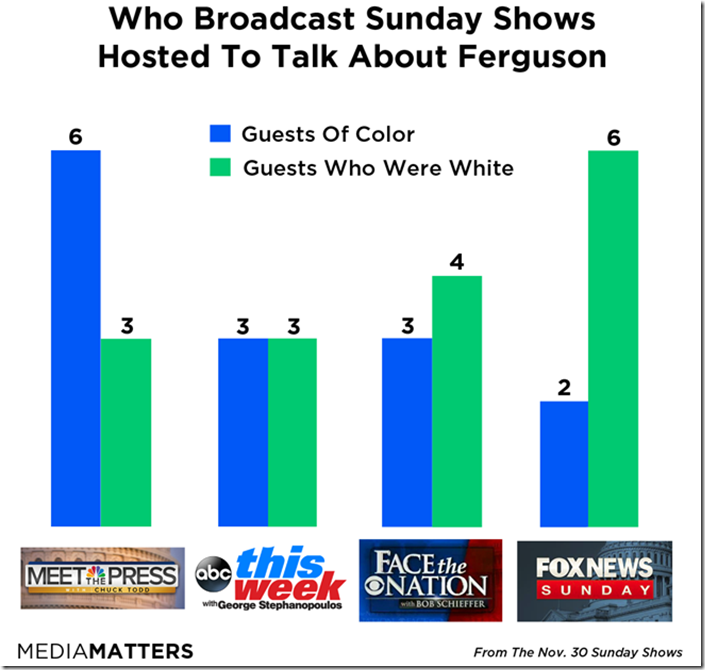 Media Matters reviewed the November 30 editions of ABC’s This Week with George Stephanopoulos, CBS’ Face The Nation with Bob Schieffer, NBC’s Meet The Press with Chuck Todd, and Fox Broadcasting Co.’s Fox News Sunday. Guest appearances for all programs in segments about Ferguson were coded for ethnicity.

We included all segments where Ferguson was the stated topic of discussion, or featured significant discussion of the topic. We defined significant discussion as at least two speakers in the segment talking about Ferguson to one another (e.g. the host asking a guest a question about Ferguson during a multi-topic interview). Passing mentions in segments about other topics were not included. Teasers and news packages were not included.