President Obama: ‘The US continues to outpace the rest of the world’

President Obama has been doing something he seldom did over the years. He is starting to tout his various successes and the success of the fruits of the path he laid out in the first two years of his administration. The chart below tells a story that one seldom hears in the traditional mainstream corporate media. It is important that Americans are given valid information lest they continue to elect those that put our economy in danger. 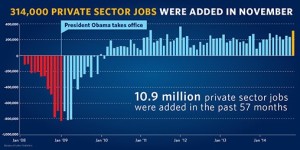 With falling oil prices partially due to the policies of this administration and the catalyst of the stimulus as well as the cost bending effected by the Affordable Care Act, the economy is clicking on most cylinders. This is being accomplished even with headwinds of a Republican Party intent on destroying the Presidency of President Obama. The direction laid out in the first two years was so effective it was able to withstand relentless GOP obstruction, their government shutdown, and the absence of them passing any middle class centric policies.

It is important that as the economy improves that Republicans are not able to coerce Americans into believing they had anything to do with the success. In fact it is imperative that the President holds tough for the next two years and only allow the passage of middle class centric policies like the hike in the minimum wage / living wage, student loan relief, environmental policies, and infrastructure projects. Absent these he must veto everything else.