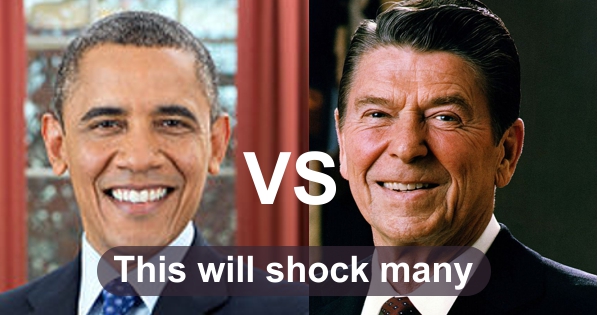 Time has an interesting way of causing many to forget reality. DailyKOS’ SemDem wrote the piece below. The blog post is decidedly more confrontational in tone than my own writings. That said, after receiving the link in an email and reviewing the entire article I was shocked that there were in fact a few news snippets I was unaware of. Irrespective of your party affiliation, read the article in its entirety and please comment.

Obama v. Reagan: Fun Comparison I Did To Piss Off Wingnuts on Reagan’s B-day

No Scalia, No Rumsfeld, No Cheney.  No Bushes and all of their appointments and disasters.  No funding of dictators like Saddam Hussein (Reagan propped him up big time) or psychopaths like Osama Bin Laden (that worked out well).

An America far less dependent on oil.  A superpower respected for skilled diplomacy in ending conflicts, instead of starting them. And a healthy economy with a strong middle class instead of a world where the labor movement has been viciously attacked, and the middle class is systematically being dismantled.  Under Reagan, corporations gained massive power to the point today where they have become “people”.  Unions, the worker’s last protection,  were severely weakened, and the socioeconomic gap exploded.  He also bankrupted us, pouring  hundreds of billions into wasteful spending, like the failed and ridiculous Star Wars missile-defense system.   All in just 8 short years.

Reagan created the modern plutocracy. He introduced us to the whole “take from the poor, give to the rich” supply-side economics that we still suffer today.  He turned compassion to the less fortunate to villianization…  created the mythical “welfare queen”, mocked AIDS patients, and let his fellow “Christians” know it was okay to belittle the homeless.

CEOs before Reagan made 78 times their minimum wage workers.  Today, its almost  3500 times!  Without Reagan, America might have had the same income distribution we had in the 1970s, which would mean we would be averaging $120,000 annually–not $40,000.

Next time someone starts revising history or just starts a syrupy tribute, hit them with this.  Comparing their St. Ronnie with the man that literally drives them insane… Mr. O’Barry himself.  Shoot them the following information…then just watch them squirm and enjoy the fireworks:

Remember when the GOP loved to say “cut and run” as an excuse to keep our troops in Iraq forever? Even after they said “Mission Accomplished”?  But who invented cut and run?
The Gipper.

OBAMA:
Our troops were repeatedly attacked in Afghanistan, yet when Obama came into office, he increased troop strength by 68,000.  (Along with an actual plan, unlike his predecessor.)  His track record of killing terrorists far outweighs his predecessors.

REAGAN:
Reagan retreated from Lebanon immediately after the 1983 terror attack by Hezbollah that resulted in the murder of 243 Marines.  According to the 9/11 Commission Report (p. 96), Reagan’s cut and run INSPIRED Bin Laden, who viewed the United States as a “paper tiger” because of its rapid withdrawal after the attack.

OBAMA:
Gave the naval commander the go ahead to kill several pirates, which resulted in saving the life of Captain Richard Phillips.  (PS–Even though terrorists were killed and the captain rescued, f–king Rush Limbaugh, who originally accused Obama of dithering on saving Capt. Phillips, then cried that Obama killed teenagers when the snipers took out the pirates.  Obama-Derangement-Syndrome.)

OH!  And there was also that whole killing of Osama thing you might of heard about.  Obama went against the advice of his own vice president and Defense Secretary Gates and ordered the assault.  He is even responsible for ordering the two backup helicopters in case of problems, which was a good thing since one of the assault choppers crashed outside the compound.

I would also like to point out that Obama’s military intervention thru a multi-state coalition resulted in the death of Muammar Gaddafi and ended his regime without the death of one American soldier.  Reagan tried a unilateral action against Gaddafi and failed miserably.  You’re welcome.

REAGAN:
Reagan APPEASED terrorists.  He ignored their atrocities and spent taxpayer dollars to train, arm, equip, fund and overall coddle Islamist mujahidin fighters in Afghanistan for his proxy war with the Soviets. He is directly responsible for making a terrorist kingpin out of Osama Bin Laden. Reagan loved him some Taliban: 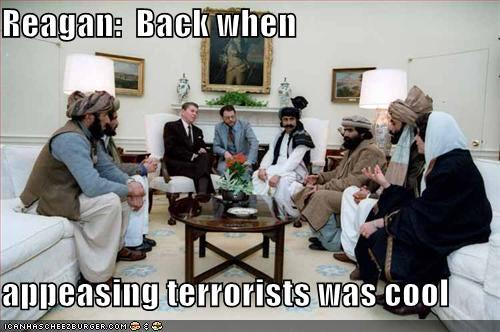 Reagan meeting with leaders of the Islamic Jihad at the White House 1985
But all I really need to say is two words:  IRAN-CONTRA.  Reagan was so bad he SECRETLY TRADED F*^KING arms for HOSTAGES!  DO I really need to say more??  Can you just imagine the wingnut explosion if Obama did that?

Reagan also met with our enemies without preconditions (1985, Soviet Union)… something that Obama was attacked for saying he just wanted to do.   But again, giving weapons to terroristspretty much takes the cake.

Continued (it is worth the read)