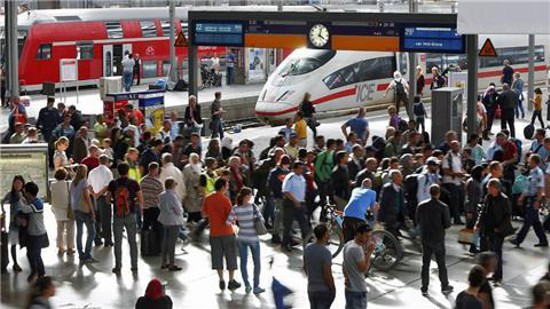 Germany has temporarily halted train traffic to and from neighbouring Austria as it continues to deal with a surge in refugees. Austrian rail officials said late on Sunday that services to and from Germany would be stopped at 5pm local time (1500 GMT). It is not known when the services would resume. German Interior Minister Thomas de Maiziere told reporters on Sunday that Germany had temporarily introduced controls along its border with Austria in an attempt to reduce the number of asylum seekers arriving in the country. “At this moment Germany is temporarily introducing border controls again along (the EU’s) internal borders. The focus will be on the border to Austria at first,” he said. “The aim of these measures is to limit the current inflows to Germany and to return to orderly procedures when people enter the country,” he said, adding that this was also necessary for security reasons. The refugees must understand that “they cannot choose the states where they are seeking protection,” he told reporters. Al Jazeera’s Rob Reynolds, reporting from Berlin, said Germany’s decision “underscores the chaotic situation” in Europe, as it tries to handle the situation. Earlier on Sunday, Germany warned that it was stretched to capacity to accommodate refugees streaming in through Hungary and Austria, with southern city of Munich struggling to cope with the new arrivals.