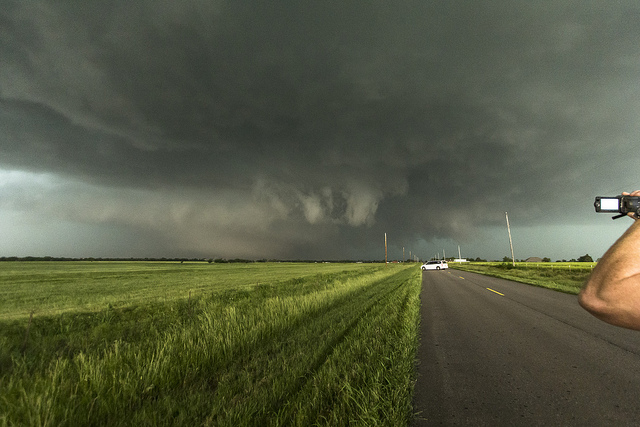 If Tornado Alley were a battlefield, historically this time of year the cannons would be silenced. Not so this December. All hell has broken loose. The weather map has been a work by Jackson Pollock: all splatters.

It’s impossible to cite a cause for such weirdness across a swath of Dixie, including killer tornadoes in North Texas. The staggering nature of the storms, however, fits into what climatologists say:

The more heat in the air and oceans, the stronger the storms. Embodying that right now is the strongest El Nino in 50 years.

Sadly and tellingly, this is immaterial to most red-state lawmakers. They are sworn to plug their ears and hum real loud when science speaks.

No, these days Texas and Oklahoma have an even more compelling example of when “natural disaster” is recast by human hands, and it appears policymakers will hear nothing of it.

A growing chorus of seismologists asserts that a rash of earthquakes in the region is caused by fracking and deep-water injection from oil and gas activities.

Cliff Frohlich, associate director of the Institute of Geophysics at the University of Texas, who’s researched dozens of quakes in recent years in the North Dallas area, told USA Today the link is “definitely established.”

Members of the archaically named Texas Railroad Commission, which regulates oil and gas, say evidence is insufficient to say that.

The difference between the two points of view is that one is held by scientists and the other is held by elected officials. The latter also happen to be members of a party that has made resistance to science a central feature and an election-cycle virtue.

That resistance would apply to geology and seismology, climatology, and basic biology. The latter would apply to evolution and to sex education that generally skirts the “education” part.

With its allegiance to the religious right, today’s Republican Party is one which believes its elephant origins are stork-delivered.

Lest we assume that most of these policy positions are sustained by one’s interpretation of the Good Book: Understand what it’s really about. The Good Book calls it mammon. The oil industry calls it profit.

Ever since black gold became Texas Tea, the oil industry has spread its profit among those policymakers who help make Big Oil more profitable, or at least who get out of its way.

The strength of Ted Cruz’ appeal to tea party zealots aside, one key reason why the Texas senator stands to have staying power in the Republican race for president is a $15 million donation to his super PAC from billionaire oil and gas developers Farris and Dan Wilks.

That was in July. In one fell swoop, Cruz had raised more money from two donors than Bernie Sanders had raised from an army of small donors.

Do you think Cruz as president, or senator, would be inclined to listen to the seismologists of the world on these matters? What about the climatologists?

That’s right. He would plug those ears those with his fingers and hum loudly. What the senator wants to hear is the “ka-ching” of petro dollars.

He’s not alone. Consider what happened in the last Texas Legislature. Republicans who talk a righteous game about “local control” of governing matters took control away from cities like Denton that would block fracking in their midst. Gov. Greg Abbott signed it with relish, and a “ka-ching” in the background.

So it goes with those whose chief concern is the next election cycle, the next business cycle, the next call from a donor. Disaster? To miss that phone call, now that would be a disaster.