George Stephanopoulos, the epitome of our faux journalism? 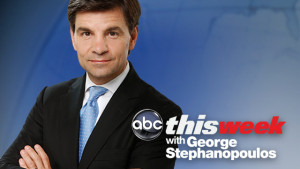 Vulgar, crude, racist and ultra-sexist though he is, Donald Trump can still see how awful the American mainstream media is.

I think one of the main reasons for Donald Trump’s popularity is that he says what’s on his mind and he means what he says, something rather rare amongst American politicians, or politicians perhaps anywhere in the world. The American public is sick and tired of the phony, hypocritical answers given by office-holders of all kinds.

When I read that Trump had said that Sen. John McCain was not a hero because McCain had been captured in Vietnam, I had to pause for reflection. Wow! Next the man will be saying that not every American soldier who was in the military in Vietnam, Afghanistan and Iraq was a shining hero worthy of constant media honor and adulation.

When Trump was interviewed by ABC-TV host George Stephanopoulos, former aide to President Bill Clinton, he was asked: “When you were pressed about [Russian president Vladimir Putin’s] killing of journalists, you said, ‘I think our country does plenty of killing too.’ What were you thinking about there? What killing sanctioned by the U.S. government is like killing journalists?”

Trump responded: “In all fairness to Putin, you’re saying he killed people. I haven’t seen that. I don’t know that he has. Have you been able to prove that? Do you know the names of the reporters that he’s killed? Because I’ve been – you know, you’ve been hearing this, but I haven’t seen the name. Now, I think it would be despicable if that took place, but I haven’t seen any evidence that he killed anybody in terms of reporters.”

Or Trump could have given Stephanopoulos a veritable heart attack by declaring that the American military, in the course of its wars in recent decades, has been responsible for the deliberate deaths of many journalists. In Iraq, for example, there’s the Wikileaks 2007 video, exposed by Chelsea Manning, of the cold-blooded murder of two Reuters journalists; the 2003 U.S. air-to-surface missile attack on the offices of Al Jazeera in Baghdad that left three journalists dead and four wounded; and the American firing on Baghdad’s Hotel Palestine the same year that killed two foreign news cameramen.

It was during this exchange that Stephanopoulos allowed the following to pass his lips: “But what killing has the United States government done?”

Do the American TV networks not give any kind of intellectual test to their newscasters? Something at a fourth-grade level might improve matters.

Prominent MSNBC newscaster Joe Scarborough, interviewing Trump, was also baffled by Trump’s embrace of Putin, who had praised Trump as being “bright and talented.”. Putin, said Scarborough, was “also a person who kills journalists, political opponents, and invades countries. Obviously that would be a concern, would it not?”

Putin “invades countries” … Well, now there even I would have been at a loss as to how to respond. Try as I might I don’t think I could have thought of any countries the United States has ever invaded.

As to Putin killing political opponents, this too would normally go unchallenged in the American mainstream media. But earlier this year, I listed seven highly questionable deaths of opponents of the Ukraine government, a regime put in power by the United States, which is used as a club against Putin.  This of course was non-news in the American media.

So that’s what happens when the know-nothing American media meets up with a know-just-a-bit-more presidential candidate. Ain’t democracy wonderful?

Trump has also been criticized for saying that immediately after the 9/11 attacks, thousands of Middle Easterners were seen celebrating outdoors in New Jersey in sight of the attack location. An absurd remark, for which Trump has been rightfully vilified; but not as absurd as the U.S. mainstream media pretending that it had no idea what Trump could possibly be referring to in his mixed-up manner.

For there were in fact people seen in New Jersey apparently celebrating the planes crashing into the World Trade Center towers. But they were Israelis, which would explain all one needs to know about why the story wasn’t in the headlines and has since been “forgotten” or misremembered.

On the day of the 9/11 attacks, Israeli Prime Minister Benjamin Netanyahu was asked what the attacks would mean for U.S.-Israeli relations. His quick reply was: “It’s very good. … Well, it’s not good, but it will generate immediate sympathy (for Israel).” There’s a lot on the Internet about these Israelis in New Jersey, who were held in police custody for months before being released. So here too mainstream newspersons do not know enough to enlighten their audience.

There is a Russian website [inosmi = foreign mass media] that translates propagandistic russophobic articles from the Western media into Russian and publishes them so that Russians can see with their own eyes how the Western media lies about them day after day.

There have been several articles lately based on polls that show that anti-Western sentiments are increasing in Russia, and blaming it on “Putin’s propaganda.” This is rather odd because who needs propaganda when the Russians can read the Western media themselves and see firsthand all the lies it puts forth about them and the demonizing of Putin.

There are several political-debate shows on Russian television where they invite Western journalists or politicians; on one there frequently is a really funny American journalist, Michael Bohm, who keeps regurgitating all the Western propaganda, arguing with his Russian counterparts.

It’s pretty surreal to watch him display the worst political stereotypes of Americans: arrogant, gullible, and ignorant. He stands there and lectures high-ranking Russian politicians, “explaining” to them the “real” Russian foreign policy, and the “real” intentions behind their actions, as opposed to anything they say. The man is shockingly irony-impaired. It is as funny to watch as it is sad and scary.

The above was written with the help of a woman who was raised in the Soviet Union and now lives in Washington. She and I have discussed U.S. foreign policy on many occasions. We are in very close agreement as to its destructiveness and absurdity.

Just as in the first Cold War, one of the basic problems is that Exceptional Americans have great difficulty in believing that Russians mean well. Apropos this, I’d like to recall the following written about the late George Kennan:

“Crossing Poland with the first US diplomatic mission to the Soviet Union in the winter of 1933, a young American diplomat named George Kennan was somewhat astonished to hear the Soviet escort, Foreign Minister Maxim Litvinov, reminisce about growing up in a village nearby, about the books he had read and his dreams as a small boy of being a librarian.

“We suddenly realized, or at least I did, that these people we were dealing with were human beings like ourselves,” Kennan wrote, “that they had been born somewhere, that they had their childhood ambitions as we had. It seemed for a brief moment we could break through and embrace these people.”

It hasn’t happened yet.

Kennan’s sudden realization brings George Orwell to mind: “We have now sunk to a depth at which the restatement of the obvious is the first duty of intelligent men.”

William Blum is an author, historian, and renowned critic of U.S. foreign policy. He is the author of Killing Hope: U.S. Military and CIA Interventions Since World War II and Rogue State: A Guide to the World’s Only Superpower, among others. [This article originally appeared at the Anti-Empire Report,  http://williamblum.org/ .]