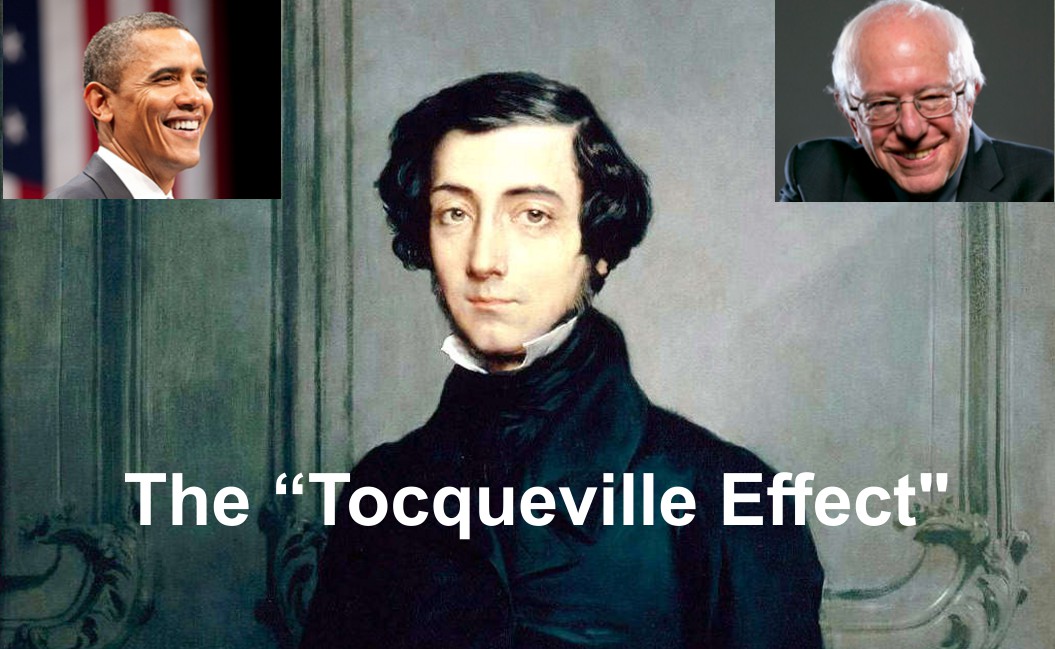 Alexis de Tocqueville analyzed the causes of the French Revolution by arguing that the push for revolutionary change occurred, counterintuitively, when things seemed to be getting better. The “Tocqueville Effect” posits that radical change may not always come when things are bad, but when things are not as good as people expected them to become. In other words, expectations for progress can lead to revolutionary desires if progress fails to come quick enough.

In 2008, Barack Obama defeated Hillary Clinton in the Democratic primary because he inspired voters with ideas of hope and change, but then the realities of party polarization, separation of powers, federalism, and wealthy special interests dampened the expectation of swift, comprehensive, or fundamental alterations to either public policy or the political process. In 2008, critics of Obama’s campaign derided his supporters for being naïve idealists who projected their aspirations onto empty slogans. Perhaps, but most people were genuinely inspired by Obama’s call for post-partisanship and a renewed focus on the common good.

Obama and the Democrats in Congress accomplished a lot despite unprecedented Republican obstruction, at first as the minority party in both chambers, then as the majority in the House after 2010, and finally as the majority in both chambers in 2014. Obama’s willingness to use executive power to advance the Democratic Party’s progressive agenda increasing as the Republican majorities increased. In 2016, the country is in much better shape than it was in 2008. While progressives have been frustrated with both the pace and substance of reform, health care insurance has been extended to more people, Wall Street regulations have been increased, new consumer and environmental protections have been implemented, and LGBT rights have been advanced.

Yet, as Sanders and Clinton regularly acknowledge, wages are stagnant, savings for retirement are non-existent, the cost of child care, health care, and higher education increase at unsustainable rates, and income and wealth inequality are soaring. Not to mention the fact that those with lots of money can now influence the political process more than ever to further entrench their wealth and prevent reforms that would benefit the working and middle class.

Still, things have improved and are still getting better. New York Times columnist Paul Krugman has summarized the merits of what Obama and the Democrats have achieved over the last seven years, but Krugman is a perfect example of an otherwise sensible liberal who seems to misunderstand the substantive reasons why progressives are supporting Sanders. Many commentators have oversimplified the Democratic primary as being a divide between realism and idealism, or even worse, mischaracterized it as a dispute over the best means toward the same end.

Supporting Bernie Sanders is neither an act of idealism or a mere disagreement over means.

Obama’s presidency created the expectation of fundamental transformation to the political process and an era of comprehensive reform, but both failed to come to fruition. Hence, the Tocqueville Effect. Progressives and liberals who enthusiastically supported Obama over Clinton in 2008 know what the result will be if she gets elected to play George W.H. Bush to Obama’s Reagan. A moderate Democrat will be obstructed by a Tea Party House of Representatives that has been gerrymandered to hell for the foreseeable future. Clinton is a dealmaker and a pragmatist, which are admirable, desirable, and necessary qualities during a time of divided government. The problem that progressives have with nominating Clinton is that she, by the nature of being who she is, already concedes far too much ground to the Tea Party in the negotiations that will take place between the White House and Congress.

Progressives who support Sanders understand that government is divided, will remain divided, and that deals will be made. They want Sanders doing the negotiating so that the compromise that is reached in the near-term can be something that truly advances equality and justice. They want Sanders doing the negotiating so that in the long-term the parameters of the debate continue to be expanded. If the goal is center-left or social-democratic policy with a Tea Party House, then you better have a principled progressive pulling the center in such a way that it does not continue moving to the right, and you better have a long-term plan to retake control of Congress and state legislatures. Supporting Sanders is being realistic and pragmatic about the current state of American politics. Believing that Clinton can or will move public policy to the left is being idealistic and naïve.

Obama’s presidency has revealed the limits of the current system, but he arguably created the space for a Sanders presidency to become possible. Obama has been transformational in the same way that Reagan was, which was his goal, but his impact has been more to enable a move further to the left after he leaves office. His true legacy will be creating the space and demand for more radical reform, both due to his aspirations and shortcomings as president. Obama has done the country a great service by stabilizing the ship of state, articulating a vision of transformation, and demonstrating the limitations inherent in the governing strategy that Clinton would pursue in an attempt to protect his legacy. But let us be clear, Clinton is campaigning to preserve the accomplishments of someone who did not achieve their goals. The divide between those supporting Sanders and Clinton is absolutely about a difference in ends.

Hence, Bernie’s “political revolution.”  Progressives know that the only conceivable way to rapidly rebuild the Democratic Party at the state and national level, and specifically to take back the House, is to construct a new coalition around a bold agenda that is worth fighting for. American democracy has been suffering a slow motion decay in terms of citizen participation as polarization, cynicism, and corporate corruption have steadily increased. The only way to rejuvenate the Republic is to mobilize large numbers of people around a set of common goals that include improvements to the political process itself. Most people understand that the reason the political system fails to produce beneficial public policy is the fact that the campaign finance system has been corrupted by wealthy special interests.

Barack Obama offered a more transparent, less corrupt, and post-partisan process that would produce better public policy. He failed to deliver, but the people who supported his 2008 candidacy still hunger for that type of transformation and Bernie Sanders is demonstrating through his actions as a candidate that he means what he says to a degree that Obama, in hindsight, never did. Contrary to what many commentators are saying, the supporters of Obama’s 2008 campaign have learned a lot from the Obama years, which is why they are doubling-down on the call to fundamentally remake and transform America. They know that Clinton is competent enough to protect Obama’s legacy, but they would rather try to achieve the original goals laid out in 2008.

This election is not about preserving the Affordable Care Act or resisting attempts to privatize Medicare, it is about building a movement that will re-construct a long-term Democratic majority large enough to ultimately create a single-payer Medicare for All system. Not next year, as many commentators seem to assume that Sanders supporters expect, but two or three election cycles from now. And free tuition at public colleges and universities. And paid family leave. And a living wage. And a Green New Deal that updates our infrastructure, paves a transition away from fossil fuels, and provides good paying jobs to millions of people. Accomplishing this agenda will require large voter turnout during midterm elections, as well. If Bernie Sanders is elected president, he can use the office to promote this bold agenda and maintain high voter turnout during midterm elections. Democrats can retake Congress and state legislatures, which will make a constitutional amendment to overturn Citizens United possible. Not next year, but sooner rather than never.

Barack Obama has brought many things to our attention, but has not been able to solve problems by himself. In his analysis of the French Revolution, Tocqueville wrote, “Patiently endured so long as it seemed beyond redress, a grievance comes to appear intolerable once the possibility of removing it crosses men’s minds. For the mere fact that certain abuses have been remedied draws attention to the others and they now appear more galling.” The concrete, yet incomplete, reform of the Obama presidency has produced a new fervor for revolutionary change. Things have most certainly improved, but we find ourselves unable to avert our eyes from everything that could be. In the end, we still have the audacity of hope.