A vote for Bernie Sanders is pragmatic realism 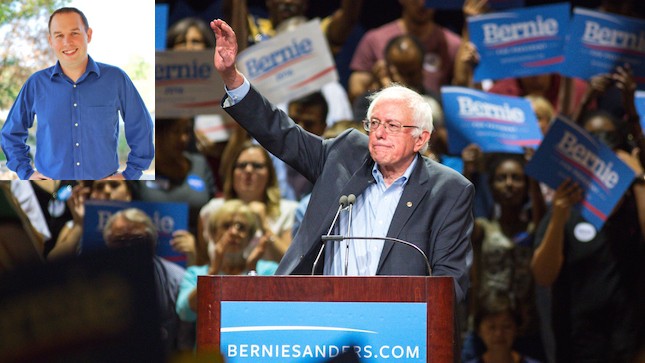 For the last 36 years, most Republican officials, and some Democrats, have told us that the rich are job creators and that the best way to stimulate the economy is to put more money in the hands of the wealthy. Unfortunately, this plan failed.

The reason it failed was because economic growth is based not on how many products the wealthy can make, but on how many products the average consumer can afford to purchase. The only way to stimulate the economy is to put more money in the hands of the average middle or working class person. As this is done, not only will the consumers benefit, but the business owners will benefit due to the fact that consumers are purchasing more of their goods and services.

Does Bernie Sanders Just Want To Give Away “Free Stuff?”

No, and it is unfortunate that people have come to this conclusion because it is based upon an idea that life is a zero sum game in which we are all fighting for scarce resources. More often than not, we are much more interconnected.  If a 17 year old goes to college, graduates, continues to medical school, and then becomes a doctor, she may save people’s lives and make the lives of even more people more enjoyable.  She may even cure a horrible disease. If, however, she is unable to complete college due to financial issues, she will never be able to save those lives.  Worst case scenario, she will become discouraged and possibly even resort to crime, which will make life less secure for the rest of us. When one person is successful, we all benefit, but when one person fails, we all suffer.

The same could be said for healthcare. In America we tie healthcare to employment, but if a person wants to start their own business, they have to quit their job, which means going without health insurance. When an individual gives up on her dream of starting her own business, we all lose out on the good or service that she would have been able to offer had we made that risk a little safer by insuring that everyone has insurance, regardless of employment.

When we contribute to infrastructure, education, science, technology, healthcare, housing, anti-poverty, and all of these programs, we are not giving away free stuff but investing in the future of our nation.  Just like it is smart for an individual to invest in his future, even if it may cost him a little extra in the present, it is smart for a nation to invest in the future and the return will be worth much more than the cost of the investment.

I believe Bernie has the better chance of winning for a few reasons.

2. The excitement factor is important and Bernie’s supporters are either very enthusiastic or very enthusiastically angry at the system while Hillary does not have the same intensity on her side. Without that, her campaign will suffer much the way that it does with most Texas gubernatorial races where the candidate tries to run from the center instead of standing on the issues that people care about

4. I have serious fears about Benghazi and her emails in a general election. I could care less about her emails, but I can guarantee that it will be repeated over and over again and it will enhance the narrative that has already been created about her. Or even worse, what if the FBI actually finds something serious after we make her our candidate? That could be devastating.

5. I don’t think the “socialist” label will seriously hurt Sanders. It certainly wont with democrats and it wont with younger voters. I believe having the Republicans calling all Democrats a communist for the last 30 years has taken the meaning away from the word to where it no longer matters.

If Bernie Sanders Wins, Will He Be Able To Get Things Done?

Sanders will be better able to get things done because he will be better at using the bully pulpit and raising popular support for his programs which will pressure congress to act. Clinton will try to use her skill to make backroom deals, but she will be trying to make those deals with people who are bought off or who believe God spoke to them, and it wont work, just like it hasn’t worked for President Obama. We need a president on our side who can use the bully pulpit to mobilize the public to have his back just like Teddy Roosevelt, FDR, LBJ, and (unfortunately) Ronald Reagan were able to do.

Clinton has a problem when it comes to negotiating.  During a negotiation, a person should start with the extreme position and let the other side talk you down.  Clinton is giving everything away, however, before the primary is even over.  With that strategy, moving forward will be possible. Backward is the only direction we will be able to go.

Since Democrats lost the Legislature more than ten years ago, we have tried to turn Texas blue by playing to the Center while Republicans have won race after race by running to the right. Our hope was that by playing “Republican Lite” we could win over Republicans, but it hasn’t worked. Instead, we have been looked at as being weak and mocked as socialists, even though we have been far from that. Most importantly, we have looked like we stand for nothing. This is our chance to change that, and I believe that doing so will inspire the majority of Texas voters who typically stay home. The Bernie campaign has brought out new voters in droves, many even volunteering. If he loses this election, we lose those new voters. This is our chance to turn Texas blue.

This article originally posted at CodyPogue.org.