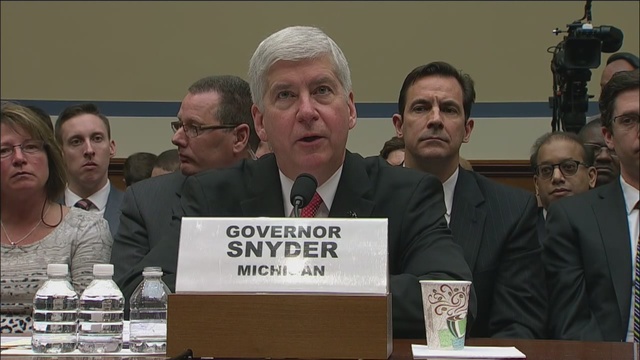 This article titled “Flint water crisis hearings at Congress reveal failure of US government” was written by Oliver Milman in Washington, for theguardian.com on Thursday 17th March 2016 21.49 UTC

Three bruising congressional hearings into the Flint water crisis, possibly the gravest US public health emergency since Hurricane Katrina, have produced plenty of bluster and finger-pointing, but also troubling suggestions that America’s system of government is fundamentally broken.

A procession of elected officials, mayors, regulators and an emergency manager have appeared before the inquiry since February, to be berated over how a poverty-stricken city of 100,000 people was fed poisoned water for over a year before anyone started to heed warnings that all was not well. An estimated 8,000 Flint children risk growing up with learning and developmental problems due to the lead that leached into their drinking supply.

America’s complex web of water regulations gave ample opportunity for those questioned to hurl blame at others. There was no shortage of targets. At the time Flint fatefully switched its water supply to the Flint river in April 2014, the decision was made by a state-appointed emergency manager, a sort of financial tsar with wide-ranging powers. But there was still a mayor, a council, a state regulator, the governor the regulator reported to and the US Environmental Protection Agency. Everybody, yet nobody, was responsible.

The person most under pressure, Michigan’s governor, Rick Snyder, was also the most contrite. Appearing before the House oversight committee on Thursday, Snyder said the experience was “the most humbling of my life”.

“I’m going to have to live with this my entire life,” Snyder said. “There’s a question of trust in government. It’ll take a huge amount of time to earn that back, if it can be earned back at all.”

Snyder, a Republican, ran for office with a pledge to run the state like a business. With his management-speak and Twitter handle of @onetoughnerd, Snyder has been more of a technocrat than an ideologue about this, which is perhaps why he conceded at one point during the hearing: “Government is not like a business.”

The governor seemed ill at ease under the spotlight, penned in on one side by congressmen baying for blood and with the contained fury of Flint residents, many wearing “Flint lives matter” T-shirts and pushing for his recall, on the other. He shifted in his seat, and took gulps of water. In the early stages of the four-hour hearing, Snyder’s hands trembled, causing the documents he grasped at to quiver.

His nerves settled once he laid out his case. He insisted he wasn’t “here for finger-pointing” but then proceeded to do that himself, calling the EPA “inefficient” and lambasting his “career bureaucrats” in the Michigan department of environmental quality for misleading him.

“I get so mad, I should’ve never believed them,” Snyder muttered. This indignation was somewhat undercut by moments of sheer incredulity – when General Motors stopped using the Flint water supply because it corroded new engine parts, Snyder simply accepted an assurance that the water was still fine for human consumption. “These are the kinds of red flags I kick myself over,” he said.

Confronted by an array of emails that show his own officials fretted for more than a year about the state of the water and the residents that were being “blown off” by the denials of a problem, Snyder gritted his teeth and promised he would fix the mess.

Democrats didn’t waste their limited speaking time, hurling invective at Snyder and calling on him to quit, to applause from the Flint residents. The governor was “dripping in guilt”, “missing in action” and even compared to a man who beats his wife and then denies responsibility. The amount of light shed by the hearing was easily matched by the heat.

Sitting alongside Snyder was Gina McCarthy, administrator of the EPA, which has national water regulations that are given to the states to implement. McCarthy has had a tough past year, with her staff causing a toxic spill in a Colorado river and then failing to treat the Flint crisis as the emergency it was until it was too late.

Congress is well-used to hearing McCarthy’s Boston accent, however; the civil servant endured the longest confirmation process in history. She displayed exaggerated patience as Republicans denounced her record and called upon her to resign for failing to act upon Flint and then allegedly sidelining Miguel del Toral, the EPA official who first raised the alarm in June last year (in an email this week, Del Toral denied he was punished for speaking out).

“This is not my first rodeo with you,” Congressman Paul Gosar told McCarthy. “Remember south-west Colorado, remember the ineptitude shown there? You have built a culture at EPA of bureaucratic negligence and incompetence. You’ve never taken accountability for any of the problems at the EPA.”

Frustrated by McCarthy’s refusal to apologize or take blame for Flint, Jason Chaffetz, the committee chairman, resorted to simply haranguing her, much like a boxer desperately trying to land a knockout blow in the final round. “You screwed up,” Chaffetz spluttered. “You messed up 100,000 people’s lives.”

The closest McCarthy got to penitence was to say the EPA should have been more “aggressive”.

The novel sight of Republicans attacking the EPA for not forcing Michigan to deal with Flint wasn’t lost upon those used to the GOP castigating the agency for overreach and meddling in state affairs.

The political grandstanding was in danger of obscuring some very real challenges – an antiquated lead and copper rule administered by a jumble of federal, state and city bodies, a national legacy of six million miles of lead pipes and a water testing system so riddled with loopholes that cities routinely “cheat” the samples to underplay the lead content.

Flint’s residents have had to cope with derision from officials when they tried to alert them to the foul-smelling, discolored water coming from their faucets. They still pay some of the highest water bills in the country for water that will leave a lingering legacy.

But Thursday’s hearing brought hope to a city which hasn’t had much lately.

“There will be much more action because it’s now on a national level, thank you Jesus,” said Veronica Williams, who said her cousin has suffered kidney damage from drinking the water.

“To be here, I’m happy. But the people have a job to do, because it’s clear [politicians] won’t do it for you. Politicians nowadays only do and say what they think we’ll believe. We need a new generation that isn’t tainted. Most of them are tainted.”