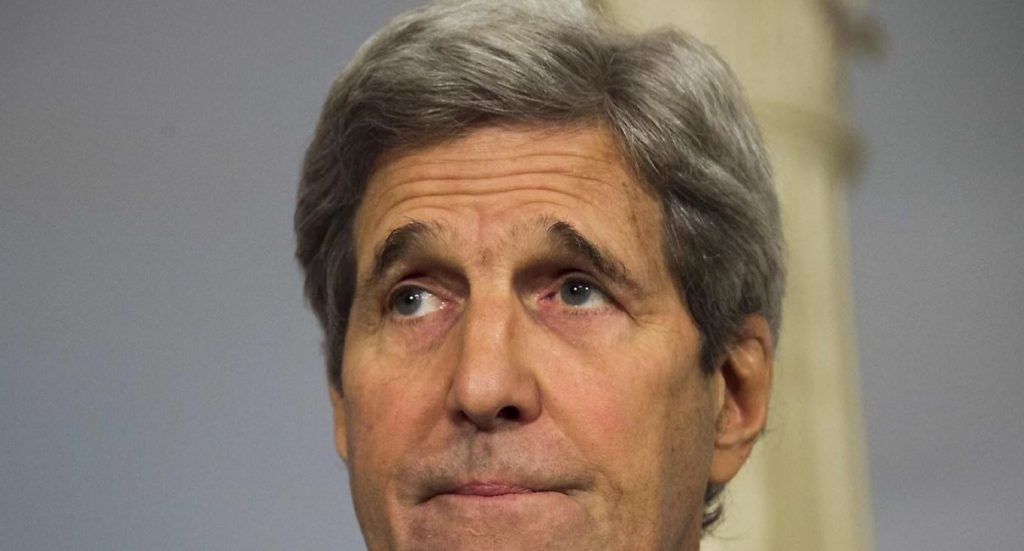 This article titled “John Kerry: presidential campaign descending into ’embarrassment’ for US” was written by Alan Yuhas, for theguardian.com on Sunday 27th March 2016 17.00 UTC

The chaos of the 2016 US presidential election “is an embarrassment to our country”, secretary of state John Kerry said on Sunday, as he reflected on the candidates’ anti-Muslim sentiment and world leaders’ growing concern.

Asked about what he hears from leaders abroad regarding the US election, Kerry told CBS’s Face the Nation: “I think it’s fair to say that they’re shocked.

“It upsets people’s sense of equilibrium about our steadiness, about our reliability,” Kerry said. “And to some degree I must say to you, some of the questions, the way they’re posed to me, it’s clear to me that what’s happening is an embarrassment to our country.”

Kerry did not specify which candidates or remarks had embarrassed the US, but he was clearly alluding to controversial proposals from the Republican candidates.

Texas senator Ted Cruz has proposed sending police to surveil, “patrol and secure” Muslim neighborhoods, and surrounded himself with advisers whom experts call “terrifying” on issues of civil rights. The proposals were derided by a wide range of officials, including NYPD commissioner Bill Bratton, who said on Saturday: “It is clear from his comments that senator Cruz knows absolutely nothing about counter-terrorism in New York City.”

Donald Trump has proposed a temporary ban on Muslims entering the US, and said he would order the military to torture prisoners and to bomb the families of terror suspects, in contravention of international law. The Republican frontrunner has separately wavered on whether to denounce white supremacist groups that have rallied to his campaign.

On Sunday, Cruz defended his proposal, saying that police patrols would be “proactive law enforcement”.

“We can’t become Europe with its failed immigration policies. We can’t repeat their mistakes,” he told Fox News Sunday. “We can’t be forced to live under Sharia law. We need to engage and find this enemy. We have to fight Islamism at every level.”

He then repeated a stump speech line that top Pentagon generals have rejected as illegal, un-American and unreasonable. “If I become president, we will carpet-bomb Isis into the ground,” Cruz said.

Trump was not asked about his proposals on Sunday, but did rule out internment camps for Muslim Americans; the anchor’s reference to a concept not realized in the US since the second world war reflected how extreme the campaign has become.

But the former reality TV star painted a picture of a dangerous world in the aftermath of the deadly terror attacks in Belgium.

“Lots of the free world has become weak,” he added. “We’re going to have problems, just as big or bigger.”

In order to combat terror, Trump suggested, “Muslims in our country have to report bad acts”.

Contrary to his suggestion that the Muslim American community is not doing enough to counter extremism, a 2014 Duke University study found more suspects were brought to the attention of law enforcement by Muslim Americans than through government investigations.

Trump also suggested the US and Europe need to completely overhaul their security systems and the Nato alliance that has united them for more than half a century. “I think Nato is obsolete,” he said. “I’m not saying Russia is not a threat, but we have other threats, and Nato doesn’t discuss terrorism.”

The third Republican candidate, Ohio governor John Kasich, also said Nato should be reformed, but said the ideas of his rivals were unproductive. Solutions, he said have “got to include our friends in the Arab Muslim community”.

“I don’t want to overreact to this,” he told NBC on Sunday.

Senator Ron Johnson, the Republican chair of the homeland security committee, told CNN “there are no credible threats” of terrorism in the US. But he also called for ground troops to intervene in Syria, and invoked the Iraq war phrase “coalition of the willing” to call for allies.

The Democratic candidates, Hillary Clinton and Bernie Sanders, have, in contrast, called for European nations to improve their intelligence sharing systems, though both have only vaguely outlined details of their recommendations.

Earlier this week, the State Department issued an unusual warning to Americans in Europe after the Brussels attacks, in which at least two Americans were killed. Kerry urged calm, saying: “People do not have to live in fear, but it doesn’t mean you should be oblivious to your surroundings.

“It’s really a matter of common sense,” he said. “It means avoid a crowded place where you have no control over who may be there. Have a sense of vigilance to watch who’s around you.”

He said travellers should report suspicious activity, such as men wearing single gloves and using large suitcases, in the manner of the men responsible for the Brussels attacks.

The secretary of state also defended Barack Obama’s conduct in the immediate aftermath of the attacks, which occurred while he was on the first diplomatic visit to Cuba by a sitting US president since 1928. Republicans heaped scorn on the president for attending a baseball game on the afternoon of the attacks, a long-planned event to celebrate new relations with Havana.

“Life doesn’t stop because one terrible incident takes place in one place,” said Kerry, who was also in the stands that day. “The president of the United States’ schedule is not set by terrorists.”