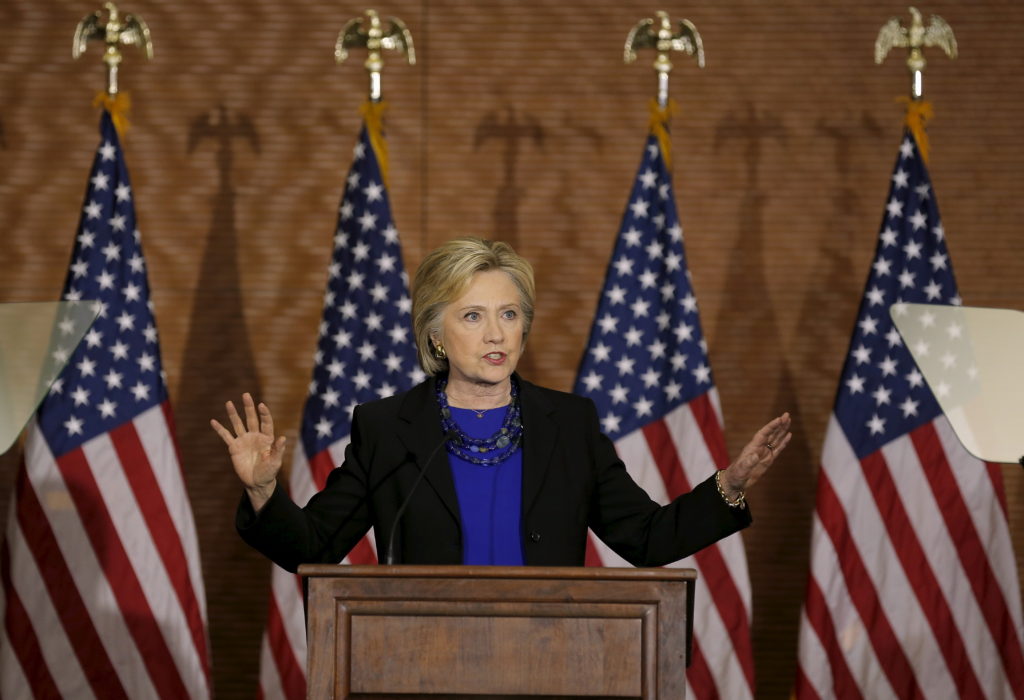 In a speech in Wisconsin, Clinton put the future of the Supreme Court at the center of the election debate, cautioning that any Trump-appointed justices would be likely to roll back workers’ and abortion rights and “demolish pillars of the progressive movement.”

“What kind of justice would a President Trump appoint, or for that matter what kind of attorney general?” she asked, noting the Republican front-runner wants a temporary ban on Muslims entering the country and the deportation of millions of undocumented immigrants.

“Once you make the extreme normal, you open the door to even worse,” she said in Madison, Wisconsin, as part of a two-day trip to the state ahead of its April 5 Democratic and Republican primary elections.

Clinton called on Republican Chuck Grassley, chairman of the Senate Judiciary Committee, to “do his job” and convene a hearing for Garland, a moderate federal appeals judge who is President Barack Obama’s nominee to fill the seat vacated by the Feb. 13 death of Antonin Scalia.

Grassley and other Senate Republicans have said they will not hold a hearing or a vote on an Obama nominee in a presidential election year, contending that voters should have a say when they elect the next president on Nov. 8.

“I’d say my voice is being ignored right now because of their obstructionism,” Clinton said. “We chose a president — we chose him twice — and now Republicans in the Senate are acting like our votes didn’t count and President Obama is not still our nation’s leader.”

Clinton said the Republican refusal to consider Garland was the “latest in a long line of actions aimed at disrupting our government and undermining our president, and the result is an America that is more divided, less functional and less secure.”

Grassley, a six-term senator from Iowa who has tangled with Clinton over the investigation into her use of a private e-mail account while secretary of state, responded that Clinton wanted to distract voters from the ongoing email investigations.

“This is simply a blatant attempt by Secretary Clinton to politicize the Supreme Court and to change the conversation,” Grassley, who heads the committee that must hold hearings on any Supreme Court nominee, said in a statement ahead of Clinton’s speech.

Clinton has apologized for the email arrangement, which is being investigated by the Federal Bureau of Investigation and has been slammed by Republicans for potentially compromising security. Clinton has said she did nothing wrong and she believes the government will vindicate her.

Garland traveled to Capitol Hill on Monday to meet with Democratic Senators Ben Cardin of Maryland and Joe Donnelly of Indiana. His first visit with a Republican, Senator Mark Kirk of Illinois, is scheduled for Tuesday.

Democratic members of the Senate Judiciary Committee wrote to Grassley on Monday and proposed hearings on Garland in April, with votes on the nomination by May 25.

Clinton’s speech came as her campaign aides argued with rival Bernie Sanders’ campaign in competing calls with the media over whether Sanders has a viable path to the Democratic presidential nomination.

Sanders, a U.S. senator from Vermont, won contests in Alaska, Hawaii and Washington on Saturday, chipping away at Clinton’s lead in the race for the 2,382 delegates needed to secure the Democratic nomination at the party’s Philadelphia convention in July.

Clinton now has a lead of 268 pledged delegates over Sanders. When superdelegates, party leaders who can support any candidate, are added, Clinton leads 1,712-1,004, according to an Associated Press count.

But Sanders aides said he could eclipse Clinton’s advantage once the final round of contests are held on June 7, and that superdelegates would begin to switch to back Sanders once he did.

“We are in this to win it, and there is a path to do so,” campaign manager Jeff Weaver said.

Clinton’s campaign described her lead as “insurmountable” given the party’s proportional allocation of delegates in all states, which means Clinton will keep piling up delegates even in states Sanders wins.

“You have to win these big states very big, you have to win by landslides” to make up the deficit, Clinton strategist Joel Benenson told reporters.

Trump also plans to campaign in Wisconsin this week as he seeks to build his lead over Republican rivals U.S. Senator Ted Cruz of Texas and Ohio Governor John Kasich.

Trump has won 738 of the 1,237 delegates needed to take the Republican nomination at its July convention in Cleveland. Cruz has won 463, while Kasich has won 143, according to The New York Times.