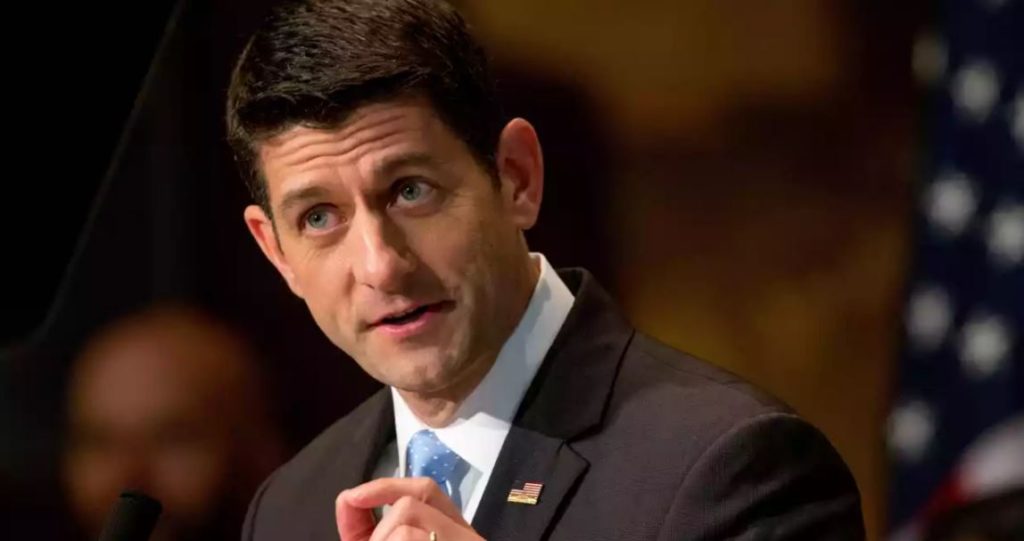 d also delete this text before you publish this post.)

This article titled “Paul Ryan declines to support Donald Trump as Republican standard-bearer” was written by Sabrina Siddiqui in Washington, for theguardian.com on Thursday 5th May 2016 21.57 UTC

House speaker Paul Ryan, the highest-ranking elected Republican official in the US, has said he does not yet support Donald Trump as the party’s presumptive presidential nominee.

Marking the latest defection in a brewing civil war that threatens to tear apart the GOP before the general election in November, Ryan, who will chair the party convention in Cleveland in July, said Trump had yet to prove he shared the conservative values and principles necessary to be the party’s standard-bearer.

“I’m just not ready to do that at this point,” Ryan, the 2012 Republican vice-presidential nominee, told CNN in an interview on Thursday when asked if he was backing Trump. “I’m not there right now.”

Trump responded to Ryan on Thursday evening, with a statement that was relatively tame by the standards he has shown when criticized in the past.

“I am not ready to support Speaker Ryan’s agenda,” Trump said. “Perhaps in the future we can work together and come to an agreement about what is best for the American people. They have been treated so badly for so long that it is about time for politicians to put them first!”

Republicans remain torn on whether to embrace Trump, who became the presumptive nominee following his victory in the Indiana primary this week and the withdrawals of Ted Cruz and John Kasich.

Ryan has rebuked several of Trump’s controversial statements over the past few months, including his proposal to ban Muslims from entering the US and a refusal to disavow an expression of support from a former leader of the Ku Klux Klan.

“The bulk of the burden on unifying the party will have to come from our presumptive nominee,” Ryan said. “I don’t want to underplay what he accomplished … but he also inherits something very special, that’s very special to a lot of us.

“This is the party of Lincoln and Reagan and [former congressman and champion of supply side economics] Jack Kemp. And we don’t always nominate a Lincoln or a Reagan every four years, but we hope that our nominee aspires to be Lincoln- or Reagan-esque, that that person advances the principles of our party and appeals to a wide, vast majority of Americans.”

Ryan’s comments came a day after his counterpart in the Senate, majority leader Mitch McConnell, offered a tepid endorsement of Trump in a statement. On Thursday, McConnell’s office said he was notified of Ryan’s interview in advance.

Ryan emphasized that he did not believe Republicans should vote for Hillary Clinton, who is on course to be the Democratic nominee. But he added that Trump must work to unite the Republican party and run a campaign that Americans can be “proud to support and proud to be a part of”.

“And we’ve got a ways to go from here to there,” Ryan said.

Trump is poised to accept the nomination at the Republican convention. Several prominent figures have said they will not attend, including former presidents George HW Bush and George W Bush, who also confirmed through a family spokesman that they will sit out the remainder of the presidential election.

Jeb Bush, the former Florida governor who dropped out of the 2016 race in February, will also skip the convention.

The 2012 nominee, Mitt Romney, who in March delivered a scathing takedown of Trump’s candidacy, has said he will neither vote for Trump nor attend the convention. Senator John McCain, the 2008 nominee, will sit out the convention but has wrestled with the question of whether he will support Trump in the general election.

McCain is one of several Republican senators who face a tough re-election battle this November – races that will now be all the more hard-fought as Democrats seek to define them as belonging to the “Party of Trump”.

According to an audio recording obtained by Politico, at a private fundraiser last month McCain offered his candid assessment of how a Trump nomination would affect his chances of holding on to his Senate seat.

“If Donald Trump is at the top of the ticket, here in Arizona, with over 30% of the vote being the Hispanic vote, no doubt that this may be the race of my life,” he said.

Trump, who launched his campaign by calling Mexican immigrants “rapists” and “killers”, has shown little indication that he would transform into an effective courter of the Hispanic vote, although he did win the Republican caucuses in Nevada.

On Thursday the bombastic billionaire used Twitter to share a photo taken at Trump Tower in Manhattan, in which he marked the Cinco de Mayo anniversary with a taco bowl and the caption: “Happy #CincoDeMayo! The best taco bowls are made in Trump Tower Grill. I love Hispanics!”

Related: Republican race is not over yet as Trump nomination faces further bumps in road

The cracks extend even to some who are not defending seats. Ben Sasse, a first-term senator from Nebraska, shared on Facebook an open letter stating his opposition to Trump. In the letter, Sasse wrote that his voicemail was full of “party bosses and politicos” urging him to unite behind Trump because he was better than Clinton.

“This open letter aims simply to ask ‘WHY is that the only choice?’” Sasse wrote. “I signed up for the party of Abraham Lincoln – and I will work to reform and restore the GOP – but let’s tell the plain truth that right now both parties lack vision.”

In an op-ed published on Thursday, the conservative editorial board of the Wall Street Journal added its voice to the intra-party anguish.

“Mr Trump may be able to improve his image if he controls his perpetual insult machine, but there is little evidence that he can or will do so,” the board wrote.

“The essence of his politics is personal, and it’s not obvious he knows any other way.”