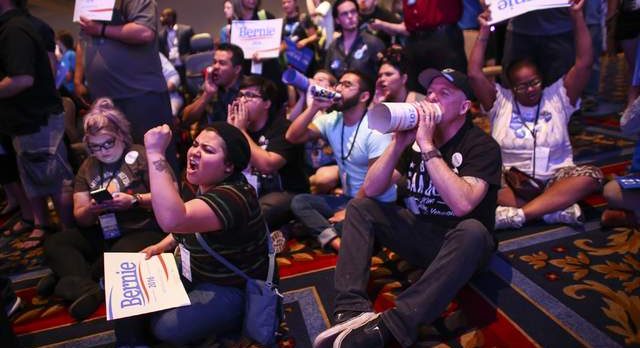 If the Democratic Party presses ahead and nominates hawkish Hillary Clinton for President, it could recreate the conditions that caused the party to splinter in the late 1960s and early 1970s when anti-war and pro-war Democrats turned on one another and opened a path for decades of Republican dominance of the White House.

This new Democratic crackup could come as early as this fall if anti-war progressives refuse to rally behind Clinton because of her neoconservative foreign policy – thus infuriating Clinton’s backers – or it could happen in four years if Clinton wins the White House and implements her militaristic agenda, including expanding the U.S. war in Syria while continuing other wars in Iraq, Afghanistan and Libya – and challenging Russia on its borders.

Clinton’s neocon policies in a prospective first term could generate a “peace” challenge similar to the youth-driven uprising against President Lyndon Johnson and the Vietnam War in 1968.

Indeed, in 2020, anti-war elements of the Democratic Party might see little choice but to seek a candidate willing to challenge an incumbent President Clinton much as Sen. Eugene McCarthy took on President Johnson, leading eventually to the chaotic and bloody Chicago convention, which in turn contributed to Richard Nixon’s narrow victory that fall.

A difference between Johnson and Clinton, however, is that in 1964, LBJ ran as the “peace candidate” against the hawkish Republican Barry Goldwater (who incidentally was supported by a young Hillary Clinton), whereas in 2016, Clinton has made clear her warlike plans (albeit framing them in “humanitarian” terms).

After winning a landslide victory against Goldwater, Johnson reversed himself and plunged into the Vietnam War, fearing he otherwise might be blamed for “losing” Indochina. With Clinton, there’s no reason to expect a reversal since she’s made no secret about her plans for invading Syria under the guise of creating a “safe zone” and for confronting nuclear-armed Russia along its western borders, from Ukraine through the Baltic States. In her belligerent rhetoric, she has compared Russian President Vladimir Putin to Hitler.

Clinton also has vowed to take the U.S.-Israeli relationship to “the next level” by embracing right-wing Israeli Prime Minister Benjamin Netanyahu who expects to convince President Hillary Clinton to end any détente with Iran and put the prospect of bombing Iran back on the table. Clinton would seem to be an easy sell.

Another feature of the LBJ-Hillary comparison is that the Democratic Party’s turn against the Vietnam War in the 1968 and 1972 campaigns prompted a collection of pro-war intellectuals to bolt the Democratic Party and align themselves with the Republicans, especially around Ronald Reagan in 1980.

Those Democratic hawks became known as the neoconservatives and remained attached to the Republican Party for the next 35 years, eventually emerging as Official Washington’s foreign policy establishment. However, in some prominent cases (such as Robert Kagan), neocons are now switching over to Clinton because of the rise of Donald Trump, who rejects the neocon passion for interventionism.

In other words, just as Johnson’s Vietnam War escalation — and the resulting fierce opposition from anti-war Democrats — set in motion the neocons’ defection from the Democrats to the Republicans, Clinton’s enthusiasm for the Iraq War, her support for escalation of the Afghan War, and her scheming for “regime change” wars in Libya and Syria are bringing some neocon hawks back to their first nesting place in the Democratic Party.

But a President Clinton’s transformation of the Democratic Party into “an aggressive war party,” whereas under President Barack Obama it has been “a reluctant war party,” would force principled anti-war Democrats to stop making excuses and to start trying to expel Clinton’s neocon pro-war attitudes from the party.

Such an internecine battle over the party’s soul could deeply divide the Democrats between those supporting Clinton – as “the first woman president” and because of her liberal attitudes on gay rights and other social issues – and those opposing Clinton because of her desire to continue and expand America’s “perpetual wars.”

Some of that hostility is already playing out as Clinton backers express their anger at progressives who balk at lining up for Clinton’s long-delayed coronation parade. The stubborn support for Sen. Bernie Sanders, even after Clinton has seemingly locked up the Democratic nomination, is a forewarning of the nasty fight ahead.

The prospects are that the animosities will get worse if Clinton loses in November – with many anti-war Democrats defecting or staying home thus infuriating the Hillary Democrats – or if Clinton were to win and begin implementing her neocon foreign policy agenda which will involve further demonizing “enemies” to justify “regime changes.”

If anti-war Democrats begin to resist, they can expect the Clinton-45 administration to stigmatize them as (fill-in-the-blank) “apologists” and “stooges” of “enemy” powers, much as happened to protesters against the Vietnam War and, more recently, to Americans who objected to such U.S. interventions as the Iraq War in 2003 and the Ukraine coup in 2014.

Yet, few Democratic strategists seem to be aware of this looming chasm between anti-war and pro-war Democrats. Many of these insiders seem to believe that the anti-war Democrats will simply fall in line behind Hillary Clinton out of fear and loathing for Donald Trump. That may be the case for many, but my conversations with anti-war activists suggest that a significant number will vote for a third party or might even go for Trump.

Meanwhile, most mainstream media commentators are focused on the divisions between the pro-Trump and anti-Trump Republicans, giving extensive TV coverage to various stop-Trump scenarios, even as many establishment Republicans begin to accommodate to Trump’s populist conquest of the party.

But it’s clear that some prominent Republicans, especially from the neocon camp, are unalterably opposed to Trump’s election in November, fearing that he will turn the GOP away from them and toward an “America First” perspective that would repudiate “regime change” interventions favored by Israel.

Thus, for many neocon Republicans, a Trump defeat is preferable to a Trump victory because his defeat would let them reclaim command of the party’s foreign policy infrastructure. They also could encourage President Clinton to pursue their neocon agenda – and watch as pro- and anti-war stresses rip apart the Democratic Party.

So, the establishment Democrats – with their grim determination to resuscitate Hillary Clinton’s nearly lifeless campaign – may be engaging in the political equivalent of whistling past the graveyard, as the ghosts of the party’s Vietnam War crackup hover over Election 2016.

[For more on this topic, see Consortiumnews.com’s “Neocons and Neolibs: How ‘Dead’ Ideas Kill”; “Yes, Hillary Clinton Is a Neocon”; and “Would a Clinton Win Mean More Wars?”]

Robert Parry is a longtime investigative reporter who broke many of the Iran-Contra stories for the Associated Press and Newsweek in the 1980s. He founded Consortiumnews.com in 1995 to create an outlet for well-reported journalism that was being squeezed out of an increasingly trivialized U.S. news media. You can buy his latest book, America’s Stolen Narrative, either in print or as an e-book from Amazon.