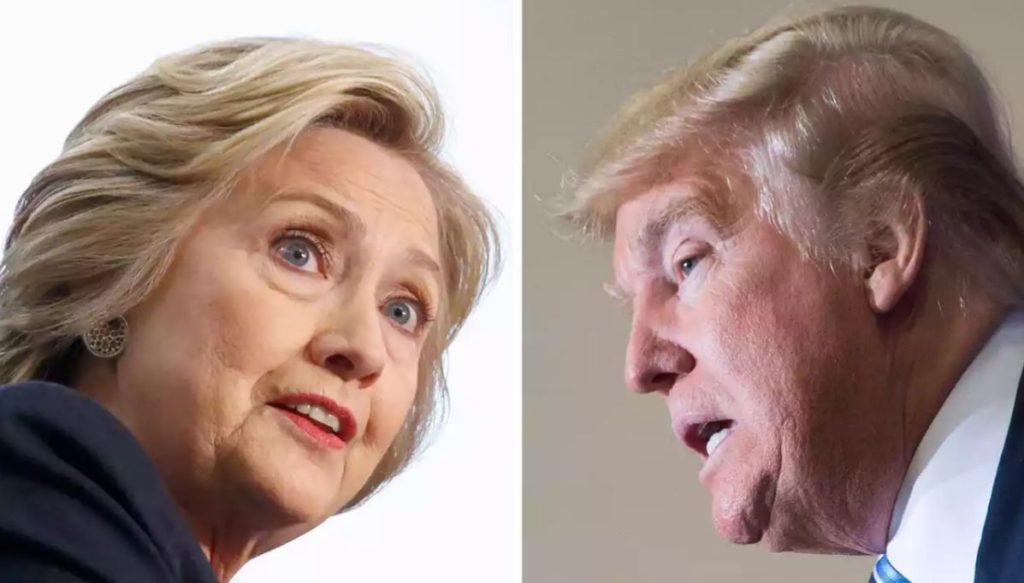 This article titled “Trump v Clinton: four lessons from the primary results for November’s election” was written by Mona Chalabi Guardian US data editor, for The Guardian on Wednesday 8th June 2016 16.23 UTC

Unless something dramatic and unforeseeable happens, the candidates in the US general election this November will be Hillary Clinton and Donald Trump.

Voting results in the last major primaries mean that Clinton, who needed 2,383 delegates to become the Democratic nominee, currently has 2,755, while Trump, who needed 1,237 delegates, has 1,536. Both candidates are over the finish line.

Some – most notably Bernie Sanders and his supporters – claim these numbers aren’t quite so simple. Clinton gets over the line only if you include her superdelegates – representatives who still have the ability to switch their allegiance when voting at the party convention in July. If enough superdelegates decide to switch to Sanders, that would change this election.

In reality, though, Clinton can probably count on the support of those superdelegates; the Associated Press has been repeatedly polling them since late 2015 and, so far, not a single one has said they would consider switching support from Clinton to Sanders.

How did we end up here? Clinton couldn’t have done it without winning in larger states, sweeping the south and getting the support of older and non-white voters. Trump’s anti-establishment approach resonated well on both sides of the country, importantly in places such as Florida and New York and among voters who were white or male.

There are four lessons from these votes that will remain relevant in the lead-up to November, now that the primary season is behind us (or almost: Washington DC, with its 20 delegates, will hold a Democratic primary next Tuesday, the final vote until the general election on 8 November).

When you boil it all down, Clinton and Trump have won because they each have a support base that is sufficiently broad and sufficiently mobilized. Understanding who those Americans were during the primaries is tricky, though, because it relies on exit polls – flash surveys of voters as they leave polling stations that are very expensive to conduct.

Exit polls should always be treated with a great deal of caution; they’re frequently wrong, since it’s so hard to grab a representative sample of respondents on polling day. But they might still offer some interesting demographic clues as to how Trump and Clinton came out on top.

In most of the 27 states where Republican exit polls were conducted by CNN, respondents who were white, male, older, didn’t have a college degree and had lower incomes were more likely to say they voted for Trump. In those same states where CNN also conducted exit polls of Democratic voters, respondents who were non-white, college educated and wealthier were more likely to say that they had voted for Clinton. Demographics will matter in November: Obama’s victory in 2008 was due, at least in part, to him securing the support of young voters, and Bush’s win in 2004 was on the back of high support among men and white voters.

But looking at this primary season’s voting demographics, it seems Trump and Clinton are speaking to different Americans. Clinton is unlikely to waste much time trying to convince white, male Republicans that they should vote for her; the candidates know that extending their support base will become increasingly difficult in the months ahead. Instead, they will seek to deepen that support base by making sure as many individuals from those demographic groups get out and vote. Which is why securing turnout will be crucial to winning.

As of March, primary turnout looked set to be around 29% according to Pew Research Center – just one point behind 2008, when it was at a historic high. But that overall increase was due in large part to Republican turnout, which for the past 26 years has rarely scraped double digits, but was set to be around 17% in 2016.

But perceptions can change reality. If, for instance, Trump can convince voters that he was responsible for high turnout because of the enthusiasm his campaign created, he might be able to generate a movement that will sustain itself through to November. If the contest looks close between Trump and Clinton, both candidates will need to boost their support by appealing to voters who would not ordinarily have chosen either candidate.

Attention then will probably shift towards independents, individuals who don’t neatly identify with either party and who have been steadily growing in number over the past three decades. In 2015, 42% of Americans identified as independent, according to Gallup, while just 29% described themselves as Democratic and 26% said they were Republican.

Sanders has won 23 of the primary races so far. His problem is that not only did he not win by enough of a margin but also, from a numbers perspective, he won in the wrong places. Although his landslide victory in Vermont was a huge success, with only 16 delegates available it made little difference. By contrast, Clinton’s success in southern states such as Texas (which has 251 delegates), Florida (246) and Georgia (117) were crucial to her success.

Because each state has a different number of delegates available, it doesn’t only matter that you win, it matters where you win. That’s also true at the national level in November, since electoral votes are not equally split up around the country – Texas has 38, for example, while South Dakota has just three.

In practice, that geographic spread will probably give Clinton an early advantage. There are 31 states where the same political party has won the past six presidential elections – 18 of them are Democratic strongholds, 19 if you include Washington DC. Together those states have 242 electoral votes – not so far off the 270 votes needed to win the White House – while the Republican strongholds have a combined electorate vote of only 102.

That doesn’t mean Clinton can relax. Even if those 31 “safe” states vote the same way in 2016 as they have done in the past (no sure thing), Trump might still be able to persuade voters in the remaining battleground states to make him the next president.

This is an unpopularity contest

By the time Ted Cruz dropped out of the Republican race in May, about a third of Americans said they had a favorable opinion of him, while the rest held an “unfavorable” one. Ben Carson (remember Ben Carson?) had unfavorability ratings at 45% by the time he quit his campaign in March.

But there’s a paradox: the two individuals who have emerged as winners from this primary season are also deeply disliked. That’s part of what makes this election so unique in recent political history. To reiterate the lessons here, it’s fine to be disliked as long as enough of the “right” people like you – the right people being those in swing states with high numbers of electoral votes who make up your demographic support base.

So in a way, the national polling numbers such as the ones below, which pit Clinton against Trump, don’t mean much; they certainly won’t be a perfect predictor of what will happen in November. Because as the primary season has shown us, what matters isn’t whether you’re up or down, but where you’re winning and which voters you have to thank for getting you there.