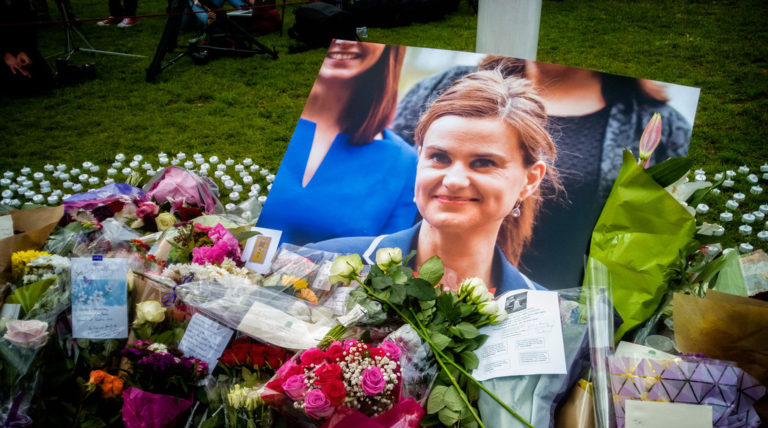 The suspect in the murder of British Labour MP Jo Cox had ties to a US neo-Nazi organization, theWashington Post (6/17/16) reports, citing a leading hate group monitor:

According to documents obtained by the Southern Poverty Law Center, the US-based organization that tracks extremist groups, [Thomas] Mair was a longtime supporter of the National Alliance, a once-prominent white supremacist group. In 1999, Mair bought a manual from the organization that included instructions on how to build a pistol, the center said.

Cox was shot by a weapon that witnesses described as either homemade or antique.

The National Alliance was founded in 1974 by William Pierce, an associate of American Nazi Party leader George Lincoln Rockwell and the former editor of the magazine National Socialist World. The group was a reorganization of the National Youth Alliance, itself an outgrowth of  Youth for Wallace, an organization that came out of the 1968 presidential campaign of segregationist George Wallace. Pierce turned the group, in the words of the SPLC, into “the most dangerous and best organized neo-Nazi formation in America.”

While head of the National Alliance, Piece published The Turner Diaries, a novel that favorably portrays a guerrilla race war and the mass murder of Jews, gays and interracial couples. A chapter that depicts the bombing of an FBI building helped inspire Timothy McVeigh’s 1995 bombing of a government building in Oklahoma City, which killed 168 people; when he was arrested, McVeigh had photocopied pages of the novel with him in his car, with selected passageshighlighted (e.g., “But the real value of all of our attacks today lies in the psychological impact, not in the immediate casualties”).  Phone records revealed that McVeigh had called a National Alliance number seven times the day before the bombing, SPLC <a href=”https: www.splcenter.org=”” fighting-hate=”” extremist-files=”” group=”” national-alliance”=””>notes.

Media spent little time examining the National Alliance connection in the aftermath of the Oklahoma City bombing, however. Once it became clear that media’s initial assumption that the bombing had to be the work of Muslim terrorists was wrong, it was, as I wrote in Extra! (7–8/95) at the time, “as if the wind had been taken out of the media’s sails when they discovered that they didn’t have a new international terrorist menace to rail against.” Journalists lost interest before delving far into the world of violent right-wing extremism.

The National Alliance turned up again in another terrorism story more recently, when Kevin Harpham planted a bomb filled with shrapnel and rat poison at the 2011 Martin Luther King Day parade in Spokane, Washington. Harpham, a one-time National Alliance member, is currently serving a 32-year prison sentence for the attempted bombing.

If you don’t remember this story, don’t worry—it got very little coverage. As FAIR’s Steve Rendall noted (Extra!, 5/11), it was only mentioned three times on the nightly news in the ten weeks that followed; by comparison, the much less sophisticated “Times Square bomb,” which failed to go off a year earlier, got 49 mentions in the same time frame, in a classic example of how acts of political violence carried out by Muslims are seen as inherently more newsworthy by US corporate media.

The National Alliance was repeatedly promoted on the radio show of Bob Grant, a popular and influential talkshow host who broadcast onWABC in New York, the flagship of the ABCradio network (Extra! Update, 6/95). Grant, whose endorsement was avidly sought by prominent politicians despite the virulent racismthat provided a substantial portion of his show’s content, allowed callers to give out contact information for the National Alliance over the air; one described it as an “organization fighting for” the “white race” (WABC, 3/10/93), while another  recommended it to “white Americans who are concerned about the future of their race and nation” (WABC, 3/24/93).  When another caller (WABC, 3/27/95) recommended the National Alliance as a group “for support of European-American males,” Grant twice declared: “I don’t have any problem with the National Alliance!”

About a year after FAIR exposed his promotion of white supremacist groups, Bob Grant was fired by Disney (WABC‘s then-owner) for gloating over the death of Commerce Secretary Ron Brown, who was African-American (Extra! Update, 6/96). But even then, his connection to the neo-Nazi National Alliance did not become an issue. Lack of curiosity about the influence of the violent far-right is a long tradition in US corporate media; don’t expect the murder of Jo Cox to change that.

Jim Naureckas is the editor of FAIR.org. He’s on Twitter: @JNaureckas.