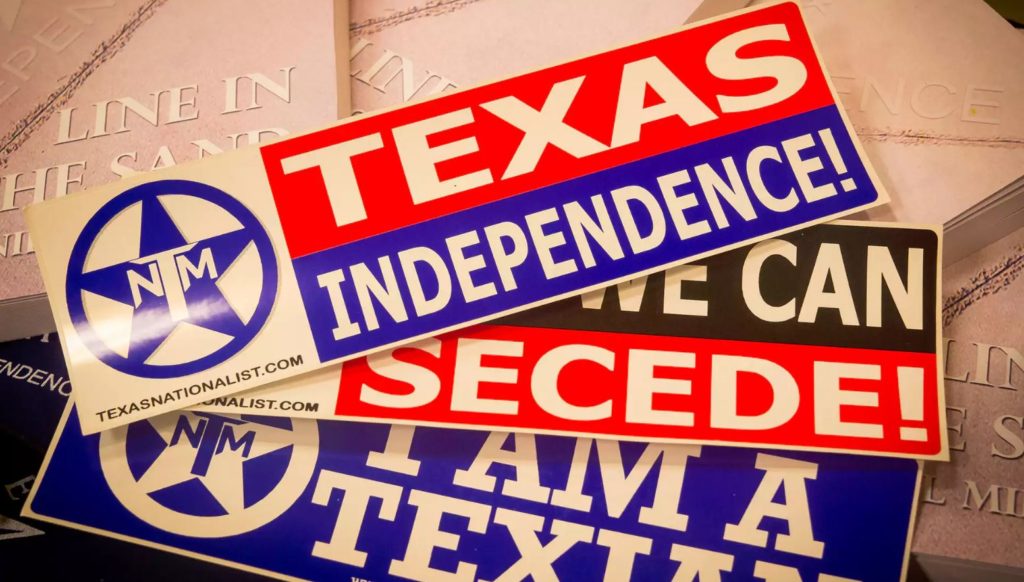 This article titled “‘Why not Texit?’: Texas nationalists look to the Brexit vote for inspiration” was written by Tom Dart in Port Arthur, Texas, for theguardian.com on Sunday 19th June 2016 11.00 UTC

How closely is Daniel Miller tracking the news ahead of the referendum about whether Britain should leave the European Union? “Hourly!” he grins. The Sun’s recent editorial calling for the UK’s departure got him quite excited.

Miller, though, is not from London or Liverpool. He hails from Longview, Texas, and we are talking in a cafe in the bleakly industrial Gulf coast town of Port Arthur, some 5,000 miles from Westminster.

Culturally, too, we are a long way from Europe. Heck, we are even a long way from Dallas. But the referendum matters deeply to Miller and like-minded Texans. As the president of the Texas Nationalist Movement, which wants Texas to secede from the United States, he is hoping for a Leave vote that he believes will ripple all the way from Austria to Austin.

“There are a lot of people asking, if Brexit why not Texit?” he says. “I do talk with some folks over there on a pretty regular basis that are involved in Ukip and the Conservative party.”

The night before we met, Miller addressed a local Tea Party group, drawing parallels between Brexit and Texit, which the TNM is pushing as a hashtag. In Miller’s telling, Britain’s relationship with Europe was a marriage of convenience between ill-suited partners that has become stormy and ripe for divorce on grounds of irreconcilable differences, with too much sovereignty ceded to an ineffective central bureaucracy and too much hard-earned money sent elsewhere.

“Sound familiar?” he asked the audience. “Nigel Farage, you guys ever heard of him? Look him up on YouTube – trust me, you will enjoy.”

Added to the near-miss of Scottish independence in 2014, a vote for Brexit on 23 June, Miller tells me, “only helps our case because there is a concrete first world example of a modern democracy having a legitimate and public debate where the people of a country, not the political class, get to vote on how they govern themselves and that will resonate not just through Europe but here as well”.

The TNM, based in this humid corner of south-east Texas near the Louisiana border, is the most prominent and best organised of the groups that want the Lone Star state to go it alone, and plausibly asserts that the issue is growing in popularity and gathering more mainstream credibility (or at least, less mainstream ridicule).

Miller, 42, is a polished advocate who grew up in a politically active household and became frustrated by what he sees as the shackles of a federal government that are stopping Texas from reaching its full potential.

Buoyed by the rearguard action at the battle of the Alamo, Texas toiled to free itself from Mexican rule and was an independent nation from 1836 to 1845. But its fiercely solitary spirit did not fade when it became part of the union. Texas Independence Day, 2 March, is still an annual state holiday. In 2003 a state law was passed requiring schoolchildren to pledge allegiance daily to the Texas flag as well as the US flag.

“We come from a heritage of people that carved an empire out of a wilderness. The fact of the matter is that Texas has always been rough. When people first moved to Texas and settled here, you were independent or you died,” Miller says.

In 1997 a member of a separatist group, the Republic of Texas, was killed in a shootout with police after a standoff in the mountains of west Texas.

The current body calling itself the Republic of Texas believes that Texas never actually ceded its sovereignty to the United States when it joined the union (some prefer the term annexed) in 1845. “The great deception can be undone – stay tuned,” their website states. They run a parallel system of government, with Republic of Texas identity cards and coins.

The TNM, meanwhile, seeks secession through political avenues and calls for the people of Texas to decide via a referendum. Miller claims that the group has 260,000 supporters. It has fans in Russia among mischief-makers who would relish the break-up of the United States.

It also has advocates in the Texas Republican party, even though removing one of the biggest and most reliably red states from the US would make it far easier for the Democrats to win presidential elections.

Shortly after Obama’s re-election, the White House was forced to respond to a Texit petition that garnered more than 125,000 votes. The answer was no.

Another petition drive last year to put the matter to a non-binding vote did not gather enough signatures, but secession was debated at the party convention in Dallas last month, a notable moment even though it narrowly failed to make it to a floor vote.

Jeff Sadighi, a TNM backer, wants “Texas solutions” on hot-button issues such as gun rights, marriage equality and, perhaps above all, immigration and border control. “The bottom line is, the federal government due to their legal structures can only offer one size fits all solutions,” the 54-year-old says. “People in Massachusetts aren’t going to approach challenges the same way we are.”

What would the country of Texas be like? “I don’t think we’ll have checkpoints at the border with Louisiana,” Miller deadpans. “Trump may have to move his wall a little further north.”

There are no plans for rival flotillas to clash along the Rio Grande or the bayous of Houston.

But as efforts to lobby Texas lawmakers to put the matter to a vote continue ahead of next year’s legislative session, Miller is eagerly awaiting this month’s verdict in what he sees as a kindred nation.

“At a cultural and spiritual level there are a lot of similarities. A fiercely independent spirit. Keep calm and carry on. The stoicism. There’s a sense that when you’re pushed, you don’t just crumple like yesterday’s newspaper, you stand up for what you believe in,” he says. “We are easygoing, we are friendly, but when our core values and principles are threatened, we don’t take kindly to it.”