Will Sanders’ influence lead the party to take a progressive stride forward in 2016? 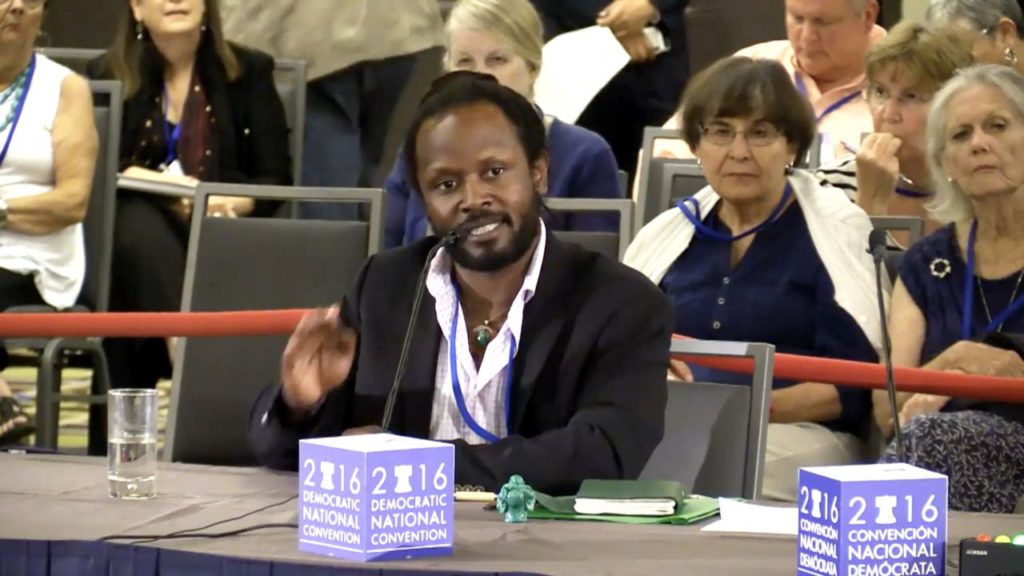 Seemingly to the surprise of some Democratic Party officials, the more-than-a-year-long primary season that is now wrapping up led to a passionate and sometimes contentious discussion about what the party has stood for during the last several elections, and who it represents. Liberal voters, it turns out, are broadly dissatisfied.

And though Bernie Sanders, Hillary Clinton and their supporters aired their ideas on debate stages and at rallies, the party’s platform will ultimately be decided by a panel of 15 people — five chosen by Bernie Sanders, six by Hillary Clinton and four by Democratic National Committee Chair Debbie Wasserman Schultz. The Democratic Platform Drafting Committee held a series of hearings to solicit input on what issues should be front-and-center during the general election.

We’ve been following along. Last week, we pulled some notable video clips from the first set of hearings held in Washington, DC. Below are some moments from the second round, held last Friday and Saturday in Phoenix, Arizona.

Dr. Michael Mann: Climate science must be a priority in policy decisions.

One of the sessions focused on climate change, an issue that 84 percent of Democrats are concerned about and that a majority worries will pose a serious threat in their lifetime,according to Gallup. Climate scientist Michael Mann told the panel that the urgent findings he and his colleagues have made do not seem to be having an impact on Republicans, and urged the Democratic Party to distinguish itself in opposition to climate deniers.

“What is disconcerting to me and so many of my colleagues is that these tools that we’ve spent years developing increasingly are unnecessary because we can see climate change, the impacts of climate change, now, playing out in real time, on our television screens, in the 24-hour news cycle. Regardless of how you measure the impacts of climate change — be it food, water, health, national security, our economy — climate change is already taking a great toll… The stakes could not be greater in this next election — the future of our children and grandchildren literally hangs in the balance — nor could the contrast be any more stark. We have on the one hand a Republican Party whose standard bearer, Donald Trump, and a great majority of its congressional representatives deny that climate change even exists. We have on the other hand a Democratic Party that understands full well that while we can debate the policy specifics for dealing with this crisis, we cannot bury our heads in the sand and avoid dealing with the growing threat.”

Sen. Sanders’ effect on the platform-drafting committee can be seen in the questions asked by many of the veteran activists serving on it, including environmental crusader Bill McKibben and public intellectual Cornel West. Both asked Anthony Rogers-Wright of the group Environmental Action to elaborate on how climate change impacts poor minorities the hardest, and how our responses to environmental crises can also risk leaving poorer communities behind.

Cornel West: “You have given us a major challenge in that the Democratic Party has at times been complicit in some of the things that we’re concerned about. And it reminds me of my beloved colleagues at Princeton, Eddie Glaude and Imani Perry — they talk about the ‘value gap.’ How inequality, even when we talk about ecological crisis, the precious life of a brother and sister on the reservation or in the barrio or in the hood still has less value than that of a precious white brother or sister in a vanilla suburb. And so the challenge becomes for me twofold: Can we seriously deal with the impending ecological crisis without there being some diminishment in corporate power and corporate influence on government?…”

Anthony Rogers-Wright: “…You were talking about corporate influence, and it doesn’t just have to do with our politicians, because I mentioned this iniquitous transmission of urgency — it also has to do with how we’re fed information. And we know our major news sources are controlled by five or six corporations. For instance — we’ve been talking about Flint, Flint, Flint. We are right here in Arizona right now where there are families of Navajo Nation people living on seven gallons of water a day due to poison water sources from uranium drilling. But we don’t talk about it. It’s just not a part of our consciousness.”

Pilar Schiavo of the National Nurses United union, a major force backing Sanders, explained the reality of our health-care system that she experiences every day.

“Nurses cry daily because they go home after seeing patients who can’t afford their care, can’t afford their medication, can’t afford high co-pays, can’t afford treatment for their children to keep them alive. And this is the reality of our health-care system, even though it is a hard pill to swallow. The ACA has had great gains: ending preexisting conditions, putting lifetime caps, allowing children to stay on their parents’ insurance longer. No one can dispute that those are very important and have greatly impacted peoples’ lives around the country. But we do need to finish the job of health-care reform, because we’re not there yet.”

After hearing from Gov. Stephen Roe Lewis of the Gila River Indian Community, a Native-American reservation in Arizona, on environmental and climate change-related issues threatening his region, Rep. Keith Ellison (D-MN) asked about the forces that suppress Lewis’ constituents’ voices in our democracy.

Gov. Stephen Roe Lewis: “Most states that have a significant Native-American population, you’re seeing that dynamic — voter suppression. You’re seeing states that are hostile toward expanding and protecting the right to vote on Native reservations and in border towns. Arizona is I would say ground zero as well… We have seen some very strident practices of Native voter suppression, and that needs to be added to the agenda for action — protection of the Native right to vote — moving forward.”

Rev. Dr. William Barber: Stand up to the conservative attack on voting rights.

Rev. Dr. William Barber is one of the leaders of the “Moral Monday” movement that is working to push back against efforts by the conservative legislature in North Carolina to, among other things, implement voter-ID measures that disproportionately disenfranchise minorities. He has become a national figure, advocating for the Voting Rights Act to be restored. The law, which protected minorities’ right to vote in states that had a historical record of suppressing that right, was made virtually useless by a 2013 Supreme Court decision.

“Immediately restoring and expanding Sections 4 and 5 of the Voting Rights Act by passing the Voting Rights Advancement Act along with legislation to curtail the power of Citizens United must be part of the platform to save our democracy from a hostile corporate takeover and build a progressive moral agenda where all voices are valued… Today, because of the action of five Supreme Court justices, Republican congressional leadership that has refused to do its job, the march of history has regressed… The US attorney general has less power today to enforce voting rights and voting protection than the attorney general had Aug. 7, 1965, the day after the signing of the Voting Rights Act.”

John Light is a writer and digital producer for the Moyers team. His work has appeared atThe Atlantic, Grist, Mother Jones, Salon, Slate, Vox and Al Jazeera, and has been broadcast on Public Radio International. He’s a graduate of Columbia Graduate School of Journalism. You can follow him on Twitter at @LightTweeting.