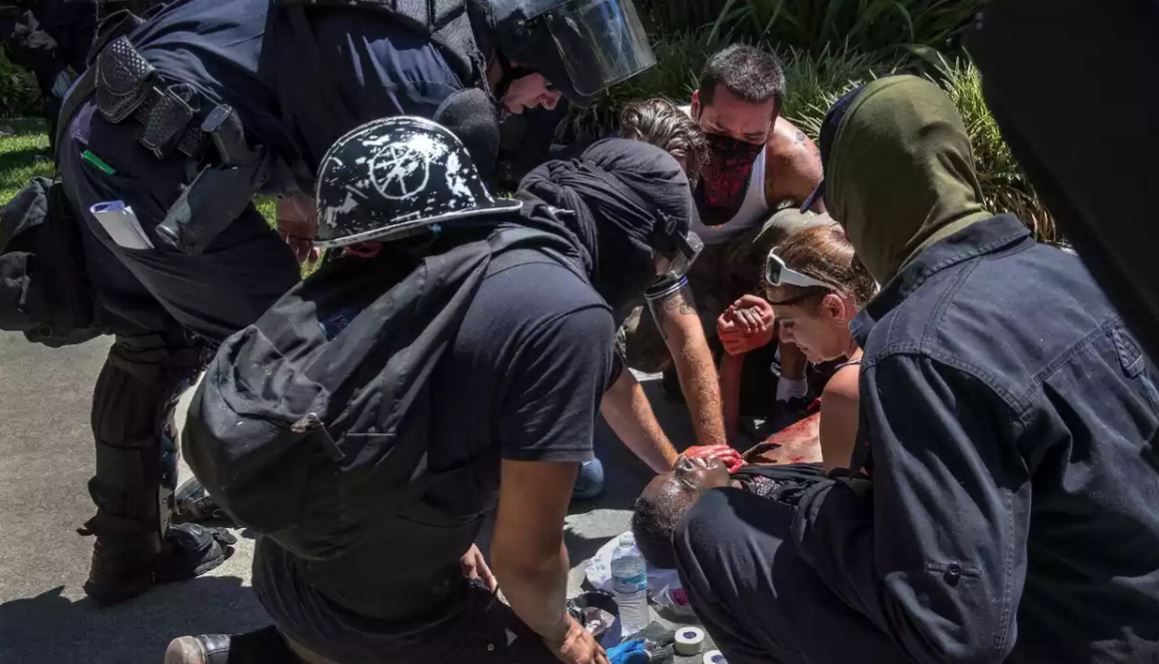 This article titled “Multiple people stabbed at Sacramento white nationalist rally” was written by Alan Yuhas in New York and Nicky Woolf in San Francisco, for The Guardian on Sunday 26th June 2016 20.39 UTC

Multiple people were stabbed and beaten in a brutal clash between white nationalists and counter-protesters just outside the California capitol building in Sacramento on Sunday.

Ten people were taken to hospitals with injuries, two with “critical trauma stab wounds”, the fire department said, after what it called a “mass casualty incident”.

Sacramento police did not immediately respond to requests for details. Harvey said the main fight broke out when people carrying sticks rushed into the rally area, a park by the capitol building. California highway patrol officers eventually broke up the fight, he said.

In a brief phone conversation with the Guardian, white nationalist leader Matthew Heimbach said only one of the injured people belonged to his group, which organized the original rally.

Despite the presence of police in body armor and mounted on horses, violence broke out, leaving blood spattered on sidewalks and people visibly wounded.

People used pepper spray and flagpoles to attack each other, and video from protesters and ABC10 showed others swinging blunt objects wildly, beating people to the ground, and dragging and kicking bodies.

Police intervened, sometimes riding horses to break up crowds, but they were unable to separate all the combatants before serious injuries were inflicted.

At an impromptu briefing, police spokesman Matthew McPhail told reporters that the force was working to disperse the protests while respecting peaceful demonstrators’ right to free speech.

“Our primary focus was to de-escalate the situation,” the officer said. “We are going to continue working with the California highway patrol to ensure that the event is held in a relatively calm fashion.”

A group calling itself the Traditionalist Workers party had planned a rally near the capitol for several weeks, and some arrived in shirts with Nazi imagery. The group had a permit to demonstrate, declaring itself “a political party whos [sic] agenda is traditional American values”, and told Sacramento officials it expected 50 people.

Counter-protesters also spent weeks planning what they called a “shut down Nazi rally”. Dozens turned out to protest, photos and video showed. After police ended the violence, the demonstrators marched around the park chanting, “When Nazis come to town what do we do? Shut them down.”

The march was organized by the Golden State Skinheads, a California affiliate of the group. Their national chairman of the TWP is Heimbach, a 25-year-old former radical rightwing student organizer whom the SPLC describes as “the face of a new generation of white nationalists”.

In a post to the organization’s website, Heimbach wrote that he was aware of plans to counter-protest but said: “After carefully weighing the pros and cons, we have decided that this would be our Thermopylae, no matter what it costs.
“We will defend ourselves by any means necessary, and if the police in Sacramento do not protect our right to speak, we will do it ourselves.”

Heimbach was accused of assaulting a black woman at a Donald Trump rally in Louisville, Kentucky, earlier this year. He was named in a lawsuit filed by protesters against the presidential candidate, and acknowledged in an online post, as described in the lawsuit, that he had shoved her. The incident was caught on video.

The counter-protesters organized in part via Facebook, writing: “Anti-Fascist Action Sacramento does not believe in allowing hate to have a platform and we are calling upon the community to shut down their rally. Fighting fascism is a moral duty, not a political one.”

One of their leaders, Yvette Felarca, told reporters after the clashes, “the Nazis are dangerous, and that’s why we need to take them on directly. Take them on head-on”.

“We believe most people are good and are willing to stand up against racial hatred,” the organizers added on Facebook. “Our objective is to force the Nazis off our streets and to send a strong message that they are not welcome in society and especially Sacramento.”