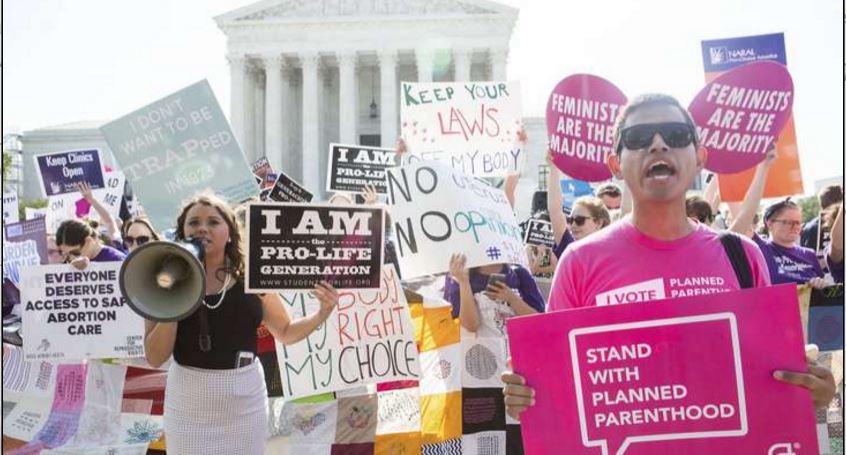 Architects of the anti-abortion restrictions struck down by the Supreme Court this week are about as concerned about women’s health as a Texas football throng is about head injuries between each whistle.

They want their team to win. They want to march down the field to their goal of burying the foe in the turf.

In Republican-controlled states, they have sought one goal alone: to put government firmly in charge of a woman’s reproductive decisions, and to take away a legal right from as many women as possible.

The forces behind what’s known fittingly as TRAP laws are interested in one thing only, and it’s not women’s health at all.

TRAP – Targeted Regulations on Abortion Providers – has become the method by which anti-choice forces have sought to block abortion because they can’t amend the Constitution.

The Supreme Court majority – containing three women — did not buy Texas’ argument that it wasn’t tunneling under Roe vs. Wade by making it possible for only a handful of women with means to attain what the court consistently has held to be a woman’s constitutional right.

As CNN.com reports, these laws come straight from a playbook devised by Americans United for Life that includes “model legislation that state lawmakers cut, paste and use.”

Ah, but this was about women’s health, say the architects: this stuff about requiring admitting privileges at a local hospital for an abortion provider, requiring clinics to become “ambulatory surgical centers” with prohibitive costs.

Both of those statements are a soft-shell lie, and Keller knows it. And the Republican Party promotes it far and wide.

Under the law struck down, the number of abortion clinics had been reduced from 25 to fewer than 10. By making abortion almost unattainable for millions of Texas women, many of them poor, the new law made desperate, dangerous attempts to self-abort more likely.

In the New York Times, Seth Stephens-Davidowitz wrote about the return of do-it-yourself abortions.
He said that last year in the United States there were 700,000 Google searches for inquiries like “how to have a miscarriage” and “how to self-abort.” Those searches included the quest to get abortion pills online including the search for “free abortion pills.”

He observes that the state with the highest number of such searches is Mississippi, which because of its own TRAP laws, has but one abortion clinic.

He also cited a survey that found that 4.1 percent of Texas women suspected that a close friend had tried to self-abort.

Hmmm. As Justice Ruth Bader Ginsburg wrote in the majority opinion striking down Texas H.B. 2, “When a State severely limits access to safe and legal procedures, women in desperate circumstances may resort to unlicensed rogue practitioners … at great risk to their health and safety.”

Hence, she said, “It is beyond rational belief that H.B. 2 could genuinely protect the health of women.”

Ginsburg just called lawmakers who justify such tactics on the pretense of “women’s health” bald-faced liars. Of course, they had to adopt underhanded means of doing what they want. Their objective is stopping as many abortions in a deceitful way because abortion remains a constitutional right.

This front being forged by the anti-choice right has been aimed at providers, but vulnerable women face other policies aimed at taking them out at the knees.

Whether the ruse is unnecessary waiting periods, unscientific warnings linking abortion and breast cancer, and other “informed consent” laws that institutionalize anti-choice propaganda, it’s all a TRAP.