FBI Director James Comey: Hillary Clinton will not be charged in email affair 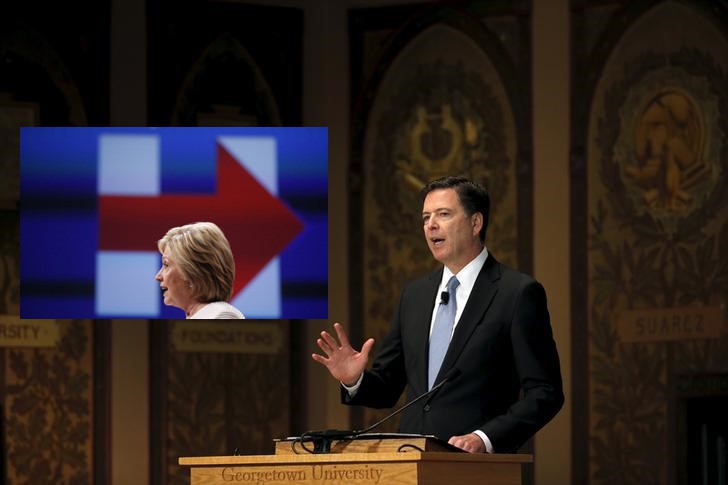 By John Whitesides and Julia Edwards

WASHINGTON (Reuters) – The FBI will recommend to the U.S. Justice Department that no charges be filed over Hillary Clinton’s use of private email servers while secretary of state, agency Director James Comey said on Tuesday, lifting a cloud of uncertainty over her White House campaign.

The Federal Bureau of Investigation found evidence of “extremely careless” handling of emails by Clinton and that at least 110 emails contained classified information when they were sent, said Comey, announcing the result of a yearlong investigation.

But, he said, the FBI concluded “no reasonable prosecutor” would bring charges against the presumptive Democratic presidential nominee.

“Although the Department of Justice makes final decisions on matters like this, we are expressing to Justice our view that no charges are appropriate in this case,” Comey told reporters in Washington.

His recommendation will likely stand. The country’s top prosecutor, U.S. Attorney General Loretta Lynch, said on Friday that she would accept the recommendations of career prosecutors and the FBI director on whether to charge Clinton for mishandling emails.

The FBI probe has dogged Clinton for the past year, contributing to her low poll ratings on honesty and trustworthiness. Republicans pointed to the controversy as evidence that she considered herself above the law.

Donald Trump, Clinton’s Republican rival in the Nov. 8 election, has hammered her on the issue, saying the investigation should disqualify her from being president. On Tuesday, he said the FBI decision was unfair.

“The system is rigged,” he said on Twitter. “As usual, bad judgment.”

Comey’s announcement came hours before Clinton’s first campaign appearance with President Barack Obama, set for later Tuesday in North Carolina. It also came less than three weeks before the start of the Democratic National Convention at which Clinton is to be nominated.

The FBI has been investigating whether Clinton broke the law as result of personal email servers kept in her Chappaqua, New York, home while she was secretary of state from 2009 to 2013. One of the questions is whether she mishandled classified information on the servers.

The Clinton campaign issued a statement saying it was “pleased” with the FBI decision.

“As the secretary has long said, it was a mistake to use her personal email and she would not do it again. We are glad that this matter is now resolved,” spokesman Brian Fallon said.

Clinton has repeatedly said she never sent or received classified information on her private servers. She underwent a voluntary 3-1/2-hour interview with the FBI on Saturday in Washington.

Comey said, however, there was “evidence of potential violations of the statutes regarding the handling of classified information.”

But he said the FBI did not find that Clinton or her colleagues intended to violate the law, and that there was no “intentional misconduct” by her lawyers who sorted her emails.

He said her staff should have known Clinton’s private email was an improper place for classified information, but there was no evidence that anyone had hacked Clinton’s communications.

Comey said there were no previous cases that supported filing criminal charges against Clinton. Other cases had involved intentional mishandling of information, he said, and there was no evidence Clinton knew she was violating the law.

Last year, the FBI recommended that former CIA director David Petraeus be charged with a felony for his mishandling of classified information with his biographer, with whom he was having an affair.

In that case, however, the FBI had evidence that Petraeus knew the information was highly classified. Petraeus eventually pleaded guilty to a misdemeanor charge of mishandling classified information.

Republican lawmakers have called for an independent investigation of Clinton, saying they do not trust the Justice Department to handle the inquiry with impartiality.

Republican criticism of the process heated up after Clinton’s husband, former President Bill Clinton, met privately with Attorney General Lynch in Phoenix last week. Lynch, who was appointed by Obama, later said she regretted the meeting and said she and Bill Clinton did not discuss the investigation.

“Based upon the director’s own statement, it appears damage is being done to the rule of law. Declining to prosecute Secretary Clinton for recklessly mishandling and transmitting national security information will set a terrible precedent,” Ryan said.

“The American people will reject this troubling pattern of dishonesty and poor judgment,” he said.