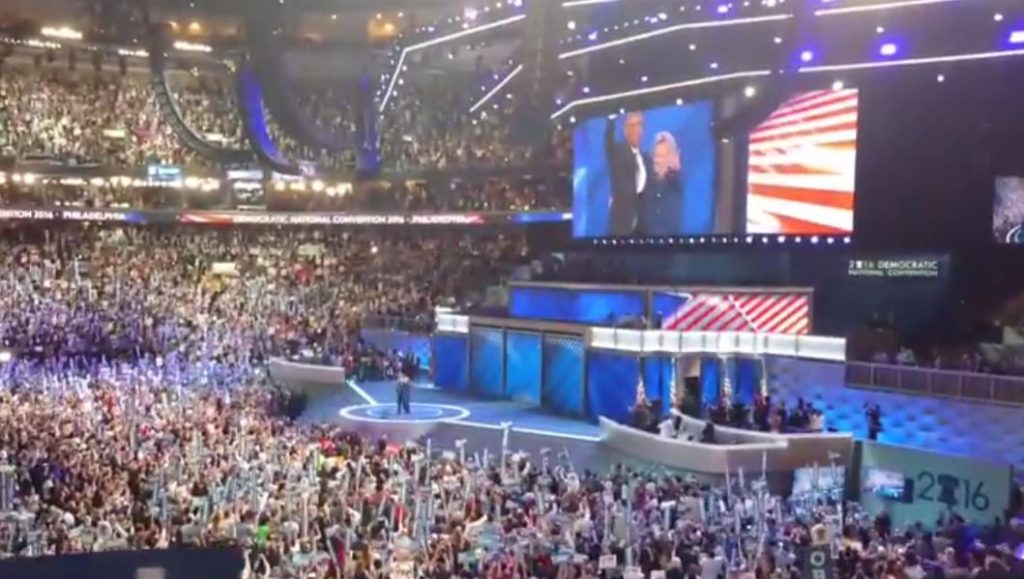 This article titled “‘America is already great’: Barack Obama urges US to back Clinton in last big speech” was written by Dan Roberts and Sabrina Siddiqui in Philadelphia, for theguardian.com on Thursday 28th July 2016 06.05 UTC

Barack Obama led an emotional assault on Donald Trump’s patriotism in his last big speech to adoring Democrats on Thursday, casting the Republican as a threat not just to his legacy, but to American democracy.

“Show the world we still believe in the promise of a great nation,” the president urged both delegates and a national audience which is in real danger of voting for someone he dubbed a “home-grown demagogue”.

The departing president was joined on stage by Hillary Clinton, making her first, surprise, appearance of the convention before an electrified crowd, which seems more than ready to embrace her. The biggest cheer of the week in Philadelphia came as Obama and Clinton walked off, arms wrapped around each other.

An evening which began with the raw emotion of people touched by gun violence from Sandy Hook to Orlando became an overt mission by a succession of big Democratic names to reach those independent voters outside of the room tempted by Trump’s appeal to struggling middle class families in an anti-establishment mood.

Earlier, vice-president Joe Biden stole the show with a blunt retort aimed at Trump. “This guy doesn’t have a clue about the middle class,” blasted a politician who revels in his blue collar roots. “Not a clue,” chanted back the audience.

But it was a trickier balancing act for the cerebral president, seeking simultaneously to take a victory lap and pass the baton safely to the right team.

“America is already great,” insisted Obama as he inverted Trump’s central theme to suggest it is his populism which threatens the country’s values most: “The American dream is something no wall will ever contain.”

America has changed, Obama said, but its values had not, adding: “We don’t fear the future; we shape it. We embrace it, as one people, stronger together than we are on our own. That’s what Hillary Clinton understands – this fighter, this stateswoman, this mother and grandmother, this public servant, this patriot – that’s the America she’s fighting for.”

On a day dominated by allegations of Russian interference in the election and an apparent call by Trump inciting Russia to help reveal Clinton’s emails, Obama presented the Republican nominee as fundamentally anti-American.

“We do not look to be ruled,” he said, rejecting the strongman philosophy, adding: “He is offering slogans and fear. He is betting that if he scares enough people, he might win just enough votes to win this election, and that’s another bet that Donald Trump will lose.”

Privately however, Clinton campaign chair John Podesta has been warning against complacency, telling staff that Trump is “not a serious man, but a man to be taken seriously”.

Obama walked off stage to a triumphant Stevie Wonder hit Signed, Sealed, Delivered I’m Yours, which could be read as a love song to those in the room, but may strike a more dissonant note among those that they still need to win over.

“Yes, we have still got more work to do,” acknowledged Obama, conceding that change is never quick and that he had always insisted “we wouldn’t meet all of our challenges in one term, or one presidency, or even in one lifetime”.

Nevertheless, a warm-up video celebrated a host of achievements worshipped in the convention hall, yet contentious outside: Obamacare, gun control, climate change and marriage equality.

“I stand before you tonight after two terms as your president to tell you that I am more optimistic about the future of your country than ever before. How could I not be?”, asked the president.

Obama began by recalling his introduction to national life at the Democratic convention 12 years ago. Yet after two weeks of intrigue over who will be the next president, he already felt like a historic figure: half campaigning for his successor, and half burnishing his legacy.

At times, the great orator of the age felt oddly flat too: upstaged by the energy of Biden and, above all, by the uplifting address of Michelle Obama two nights earlier. Aides backstage revealed that the president had been through six drafts of the speech in the last week, staying up until 3am to rewrite it after watching the first lady’s.

There were sporadic, isolated, protests from the floor too – something Obama has had to deal with all his presidency, but more manageable in a vast, and overwhelmingly sympathetic hall.

The room came alive, however when he turned to appraise “the next president of the United States”, Hillary Clinton. “You may remember we were rivals … she was tough, she was doing everything I was doing but just like Ginger Rogers, it was backwards and in heels.”

“No matter how much people try to knock her down, she never ever quits,” he added to roars, “There has never been a man or woman, not me, not Bill, more qualified than Hillary Clinton.”

“Then there’s Donald Trump,” Obama started before a predictable response to his first reference of the opponent. “Don’t boo, vote!” he shot back, recycling a quip likely to get good service over the next 100 days.

Biden also rolled out lines that Democrats are likely to rely on heavily in future weeks, angrily reclaiming the flag from a Republican party that claims increasing monopoly on patriotism.

“We do not scare easily,” added a fired-up Biden. “We overcome and we always always move forward. The 21st century is going to be the American century … we own the finish line. Don’t forget it!”

Hillary Clinton’s vice-presidential pick Tim Kaine struck a more conciliatory tone, making the first serious attempt of the week to reach out to the many Republicans known to be contemptuous of Trump.

“If any of you [Republicans] are looking for the party of Lincoln, we got a home for you here,” said Kaine, in a line that sums up why this Virginia moderate was picked as Clinton’s running mate.

A series of Republicans also appeared on video saying Trump is a “not fit to be commander-in-chief”, including the remarkable sight of the party’s last nominee, Mitt Romney, being used to help boost a Democratic convention.

Retired rear admiral John Hutson, a former Republican, took to the stage. “This morning he invited Russia to hack us,” he began to supportive boos from the crowd “That’s not law and order; that’s criminal intent.

“I have been a Republican and a Democrat and eventually an independent,” he said.” Not many people in this room can say that, but lots of people watching at home can and now they are weighing their choices.”

“I’m a New Yorker, and I know a con when I see one,” he added in a strong attack on Trump. “Hillary Clinton understands that this is not reality television; this is reality.”

Former CIA director and defense secretary Leon Panetta said: “Meanwhile Donald Trump says he gets his foreign policy experience from watching TV and running the Miss Universe contest. If only it was funny, but it is deadly serious.”

But even this moment of apparent unity was interrupted by more chanting. “No more war!” erupted a section of Bernie Sanders supporters sitting in the Washington and Oregon delegations. It prompted arena authorities to shut down lights in their section, the protestors to wave camera torches in the gloom.

Kaine also ran into trouble on the left. A small group of Sanders protesters began to interrupt him but were quickly surrounded by Clinton supporters who were encouraged to stand up in front of them by battle-scarred floor whips. Others struck up a chant of ‘Feel the Bern’ toward a moderate many progressives regard with distrust, but Kaine’s modest, self-deprecating demeanor defused a return to the outright revolt of Monday.

Obama delivered praise to the Sanders fan club: “If you agree that there is too much inequality and too much money in politics we all need to be as vocal and as persistent as Bernie Sanders,” he said. “That’s right. Feel the Bern!”

But he also issued a direct challenge to the ‘Bernie or bust’ contingent: “You can’t stay home just because she doesn’t align with you on every issue.”

Obama himself remained popular among both camps, prompting tears from many who sense the twilight of a groundbreaking administration.

Jayne Mazzotti, a delegate from Obama’s home state of Illinois, said she had been in the room for all of his convention speeches: from when he burst onto the national stage in Boston in 2004, to when he became the first African American to accept the nomination of a major party in in Denver in 2008, to fighting for his re-election in Charlotte in 2012 and now his final stand in Philadelphia in 2016.

“He has evolved and grown with precious few missteps,” she said. “He’s been a true favorite of mine as a president, and I’ve been through a few.”

“The difference between a Barack Obama and a Donald Trump, should he for whatever reason win this election, will just be a world apart. There have been Republicans that I’ve been very proud of in a sense that they were a symbol of something … they had an elegance, they had poise.

Randell Tatum, a delegate from Massachusetts, said it was a bittersweet moment to watch Obama give arguably the last major set piece speech of his presidency.

“The thing I’ll miss the most about him is the spirit he gave all of us,” Tatum said. “I think he restored this country, brought us back from the darkest times, and here we are.”

Watching Obama over the last eight years has been especially poignant for Tatum, an African American who said his ancestry in the US dates back to the 1500s.

“Not only was he the first black president, but he was a role model, a man with integrity.”