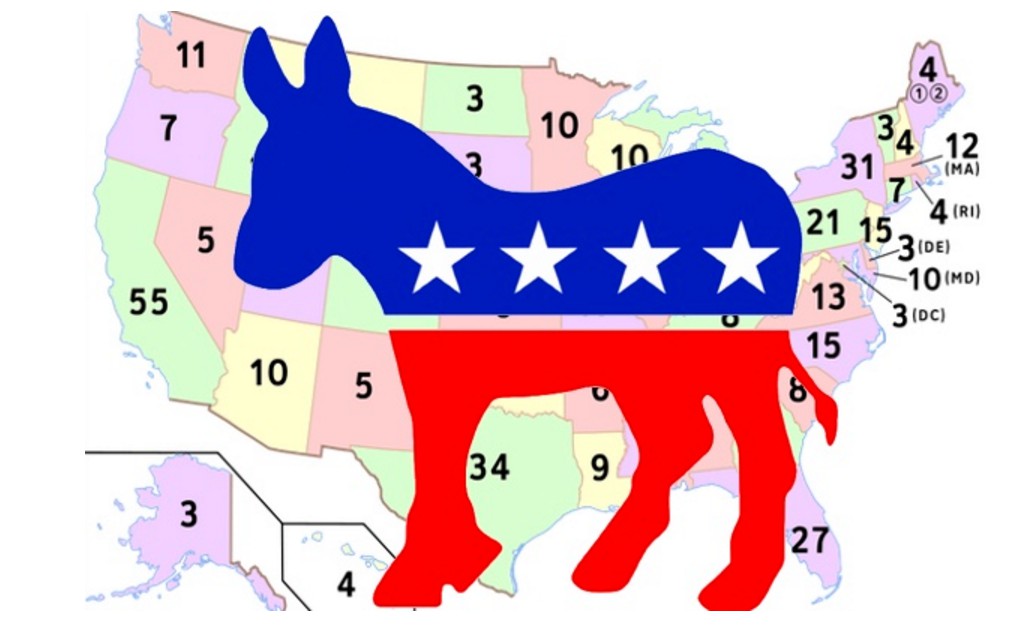 With the Republican Party now saddled with Donald Trump as their Presidential nominee, and the party in total disarray as a result, the long-term damage to the GOP is growing, even if it keeps the name its had since 1854.

No one who is a realist, including this author, now thinks Donald Trump can win any “Blue” state. And the odds of any 2012 “swing state” being gained by the Republican nominee seems extremely unlikely. That would mean, at the least, Hillary Clinton would have the same result in the Electoral College that Barack Obama had in 2012, when the President won 332 electoral votes to Mitt Romney’s 206. And the danger to the Republican Party is far worse than that.

With the rapidly growing Latino and Hispanic population and vote in several “Red” states, the odds are increasing that the Democrats could add North Carolina, Georgia, and Arizona to their total, particularly with Trump’s hostile attitude toward Mexico and Mexicans. His proposal of a wall and his vicious attack on the judge presiding over the Trump University lawsuit, who happens to be a Mexican American born in Indiana, insures that Mexican Americans, who are two-thirds of all Hispanics in America, will vote for Hillary Clinton in higher percentages than for Barack Obama in 2012. Add the growing Puerto Rican population, the second highest Hispanic numbers in America, and it seems likely that the total Hispanic vote percentage for Clinton could be higher than the 71 percent for Obama in 2012. Clinton could carry all three states, and add 42 electoral votes, making a total of 374 electoral votes against Trump gaining 164.

But a bit more long range, Texas is likely to transform back into a “Blue” state by 2024, while North Carolina, Georgia and Arizona will be even more heavily Latino and Hispanic than they are even in 2016. So add 38 Texas electoral votes and one reaches 412 electoral votes to 126 for the Republicans by 2024.

One can also add Indiana with its 11 electoral votes. Indiana, though likely to vote Republican in 2016, may become reliably “blue” by 2024 at the latest given its growing Hispanic population. In 2008 Indiana even voted for Obama (though not in 2012). That would make for 423 electoral votes for the Democrats to 115 for the GOP.

Additionally, Missouri had always been with the winner of the Presidency in the 20th century except for 1956 when it voted for Adlai Stevenson over President Dwight D. Eisenhower by a small margin of a few thousand votes. It then voted Republican for John McCain in 2008 (again like 1956 by only a few thousand votes over Barack Obama), and then completely broke the historical mode as a bellwether in 2012, when it voted much more heavily for Mitt Romney over Obama. But one must assume that Missouri might again return to the status of a bellwether state, with a growing Latino and Hispanic population, and the fact that all of its Midwestern neighbors are strongly “Blue” and have been for the last few cycles. Missouri’s ten electoral votes would give future Democratic Presidential nominees a grand total of 433 electoral votes to 105 for the Republican Party.

In summary, it seems very reasonable to project that by 2024 at the latest, and with the assumption that there will be no major war or economic collapse that transforms American politics dramatically, that we could witness a grand total of 433 electoral votes for the Democratic Presidential nominee from 32 states, including Texas, Indiana, and Missouri. This electoral calculus could become semi-permanent for the long haul. Changes in state population, to be sure, could alter the mix of electoral votes, with some states increasing in population (and electoral votes) and some states decreasing. But the electoral votes states like Texas might gain would conceivably come from other “Blue” or “Swing” states that would likely stay Democratic, so the total of 433 electoral votes might not increase overall, and instead just move from some states to others.

That would leave the Republicans likely with 18 states and 105 electoral votes, and with none of those states having a major urban and suburban population. Many have vast areas of land with small portions of the total citizenry of the nation. These would include the 8 smaller populated, more rural Southern and border states (Alabama, Arkansas, Louisiana, Mississippi, South Carolina, Tennessee, Kentucky, West Virginia); the 5 Great Plains states which are also smaller populated and more rural (North Dakota, South Dakota, Kansas, Nebraska, Oklahoma); the 4 Mountain West states also smaller populated and more rural (Montana, Wyoming, Idaho, Utah); and finally, the state of Alaska, which is also small in population and rural.

In conclusion, America would be divided into urban AND most of suburban America against rural America, a variation of the Presidential Election of 1896, which has been seen as a transformative election of urban vs. rural America. The odds of any major change in this Electoral College map for many years after 2024 is highly unlikely. So the Democratic Party would be heavily favored to keep the White House for many terms of office, and possibly break the record of six terms and 24 years, which occurred twice, between 1801-1825 (when Jeffersonians prevailed) and 1861-1885 (when the GOP prevailed).

History News Network's mission is to help put current events into historical perspective. Given how public opinion is shaped today, whipsawed emotionally on talk shows this way and that in response to the egos of the guests, the desire for ratings by the hosts and the search for profits by media companies and sponsors, historians are especially needed now. They can help remind us of the superficiality of what-happens-today-is-all-that-counts journalism.