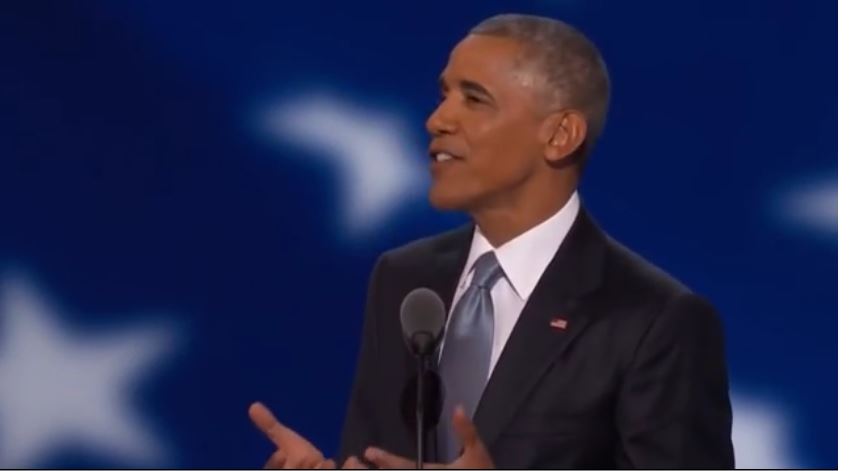 What we saw last evening with President Obama’s speech during the third night of the Democratic National Convention was what might mark a turning point in the presidential election, and what may well be remembered as the finest speech of the president’s career. What we heard was a passionate, moving, and muscular defense of a certain type of positive American exceptionalism. This defense has become all the more necessary over the past few days as Republican presidential nominee Donald Trump has indicated a desire to abandon America’s historical obligations to her allies as they’ve developed in the post-war world.

But even more than that, in using the word “demagoguery” so as to reject it, President Obama identified the central threat that American democracy now faces. At the penultimate night of the Convention, what the President offered wasn’t just something to vote against (in the frightening person of Trump), but rather something to vote for, in the millennial promise of America itself. His speech was an appeal to an Americanism that is not reducible to ethnic or religious affiliation, but one that is rather larger, broader, and more expansive than how nation-states have traditionally defined themselves. Of course there is nothing new in this – but it’s a necessary regenerative promise – a prophetic sermon spoken in the language of holding the nation to the covenant of its highest ideals. That this was a speech by the nation’s first black president spoken on behalf of Hilary Clinton who could possibly be the first female president speaks to the spirit of exceptionalism on display at the convention.

Both parties have spoken the language of American exceptionalism; what’s notable is not that Democrats are speaking that language now, but that the Republican nominee last week so conspicuously rejected it. The Democratic Party from Roosevelt to Kennedy to Obama has always conceptualized the nation as exceptional despite right-wing libel to the contrary. And the Republican Party certainly has as well, hence Obama’s emphasis on his Kansan family member’s patriotic Middle American values, and his quoting of President Ronald Reagan’s vision of America as a “shining city on a hill” (itself a paraphrase of the seventeenth-century Puritan divine John Winthrop, who was in turn quoting the book of Matthew).

In Trump’s blustering, bloviating, apocalyptic diatribe America was no better than any other nation, and her ideals were entirely ignored. For Trump, America is simply a powerful country that despite all evidence to the contrary is now a weak country, which must reassert itself by paradoxically making war on her citizens at home, while placating anti-democratic adversaries abroad. When combined with his potential connections to Vladimir Putin a more than troubling picture emerges. But if Americans heard an invocation of a nation gone off the rails, for whom our national safety can only be ensured by rejection of the very principles that made us great, President Obama’s doubling-down on America’s promise held out a glimmer of millennial hope. After last night it’s increasingly hard to argue that there is somehow no difference between the candidates.

“American exceptionalism” is certainly a problematic concept (to put it mildly). Imperialism, racism, sexism, and any number of other ideological evils have certainly been threaded into the doctrine; the horrors of Manifest Destiny could not have been accomplished without a paean to American exceptionalism. And yet, what should not be discounted, what cannot be rejected is that appeal to the angels of our better nature, that higher America beyond the realm of history, that platonic ideal to which the Declaration of Independence pointed. By defining an American as one who adheres to a desire for “life, liberty, and the pursuit of happiness,” and where “all men are created equal” a powerful radicalism of almost eschatological and redemptive significance entered the American vocabulary. It is not a mistake that protestors at Tiananmen Square (whose murder Trump condoned when it happened) created their own shrine to Lady Liberty. It is not a coincidence that even the Vietnamese who fought their own war of independence against colonialism (and us) quoted Thomas Jefferson in their declaration. It is not an error that “American” can refer to someone of any race, of any faith, of any sexuality. To quote the late Christopher Hitchens (no fan of the Clintons), “Of course, objectively as well as subjectively, the American revolution is now the only revolution with a fighting chance of survival and success: the idea that you could create a multicultural democracy over a vast expanse of the earth’s surface that could possibly be emulated by other people.” The American Revolution, which historian Gordon Wood famously celebrated for its unassuming “radicalism,” and the country founded upon those ideals, despite its hypocrisies, its excesses, and its failures, remains the truest, last, best hope. That may not mean that the United States as a country is always those things, but the quasi-mythical ideal of “America” remains so.

America has often, perhaps more often than not, failed to live up to those promises. And yet it is the language itself that remains so potent, it is not a mistake that every single successful movement for human rights, from civil rights to the LGBT movement to women’s rights, has utilized that same language. This language has been the property of both major political parties, despite their ideological differences and arguments over interpretation. What is so chilling is that the Republican Party, once the party of Lincoln and increasingly the party of Lincoln Rockwell, has rejected that utopian language of American exceptionalism in favor of something smaller, and uglier, and more common. It’s a prosaic denunciation of the dream that defined the nation, in favor of a crude and frightened ethnocentrism structured on a cult of personality, a type of system for which there is no shortage in the world. But, in his speech on Wednesday, the president reminded and called Americans whether liberal or conservative, Democratic or Republican, left or right, back to one self-evident truth: “The American Dream is something that no wall can contain.”

Ed Simon is a PhD candidate in English at Lehigh University, where research focuses on early modern literature and religion. He has written for several academic and general publications, and can be followed at edsimon.org.  – See more at: http://historynewsnetwork.org/article/163492#sthash.d1yh1CIh.dpuf

History News Network's mission is to help put current events into historical perspective. Given how public opinion is shaped today, whipsawed emotionally on talk shows this way and that in response to the egos of the guests, the desire for ratings by the hosts and the search for profits by media companies and sponsors, historians are especially needed now. They can help remind us of the superficiality of what-happens-today-is-all-that-counts journalism.