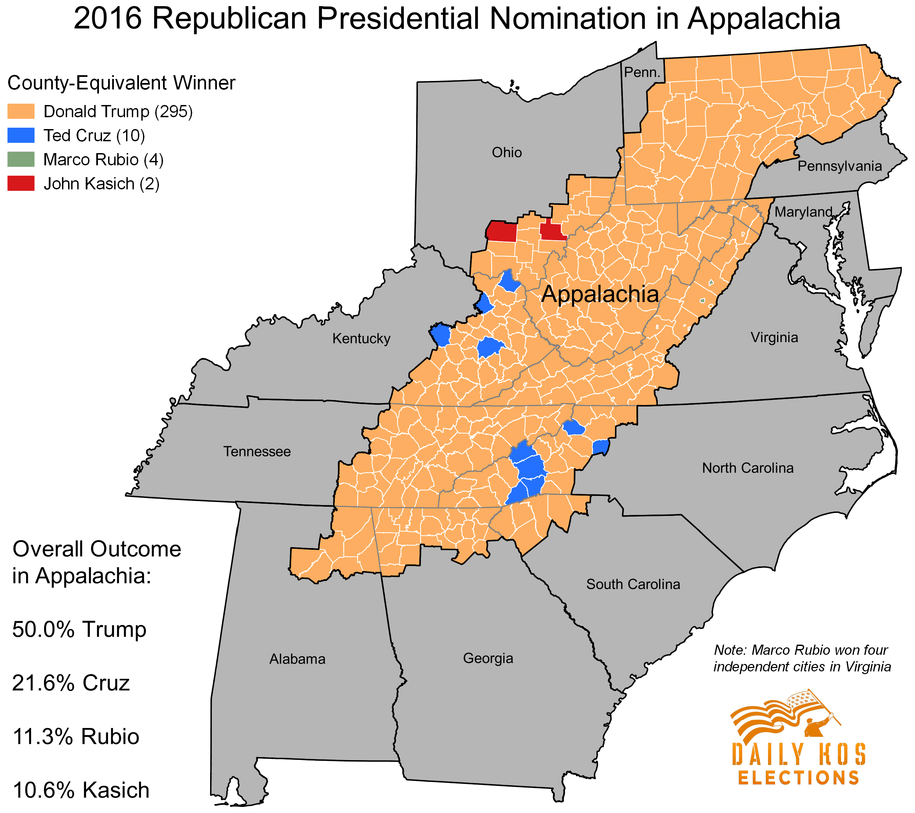 My mother grew up in Appalachia. For reasons of privacy I’m not going to say exactly where, but in its heyday, in the 30’s it was a coal mining town. The mine is closed now, as is the town that grew up around it, desolate, boarded up and stunningly depressing. Half my family is from Appalachia, ensconced in a triangle that covers part of West Virginia, southern Virginia and Kentucky. Many of them are still there. Some of them, including my mother, got out.

My wife’s mother was a single-parent mother of two, a waitress with multiple—and I mean multiple– marriages. Both she and I are the first in our extended families ever to go to college, let alone earn graduate degrees.

So whenever I hear the demeaning epithet “white trash” or“Hillbilly”  (sometimes seen here in comments to Diaries here regarding Donald Trump’s base of support), well– I don’t know what to say about that. I know and love those “Hillbillies.” And “white trash” to me is just one step away from my what my wife’s family would have been called—well, actually what she was called– when she was growing up. I never used these words for a reason—they seem awful to me and when I first heard them I didn’t even understand the connotation. My mom grew up making made toys out of rocks to play with her sister, my aunt. My wife’s mom made meals for her and her brother day in and day out out of spaghetti and kidney beans. Neither were “trash” and if they were “hillbillies,” it wasn’t a demeaning term back then. It was just who they were.

And before I’m accused of being maudlin or hypocritical I am the first to come down on anyone who supports Donald Trump. Anyone who can’t see through the fact that this effete, pampered and spoiled wannabee is just mouthing platitudes to the white working class demographic because he knows they’re desperate enough to grasp at anything– even a scam artist, anti-union casino/real estate magnate who claims to have their interests at heart– is, in my mind, pretty much a fool.

ProPublica has published an excellent article about the white working class, who they are, and how attitudes have lined up against them by both Republicans and Democrats over the past few years.

Sometime during the past few years, the country started talking differently about white Americans of modest means. Early in the Obama era, the ennobling language of campaign pundits prevailed. There was much discussion of “white working-class voters,” with whom the Democrats, and especially Barack Obama, were having such trouble connecting….The “white working class” connoted virtue and integrity. A party losing touch with it was a party unmoored.

As it turned out, the “ennobling” of working class white America had a brief shelf life (shockingly, there has never been a similar effort to “ennoble” working class African Americans or Hispanics). Which is hardly surprising considering the drivers of American culture—and thus, perceptions of class, are the mass media. The people of Appalachia and in fact anyone making less than $40,000 a year are practically invisible in the American culture. They are not seen on television except perhaps, occasionally, as “reality TV” stereotypes. They are not featured on any internet news or entertainment feed except as an occasional statistical blurb. While they may manage to be online, they are not “trending” on Twitter:

That flattering glow has faded away. Today, less privileged white Americans are considered to be in crisis, and the language of sociologists and pathologists predominates.

The article, authored by Alec MacGillis and co-published in The Atlantic, illustrates how both political parties bear responsibility for transforming the white working class into a sort of pathology, and how that fueled the political narrative we see today:

From opposite ends of the ideological spectrum, they made the case that social breakdown among low-income whites was starting to mimic trends that had begun decades earlier among African Americans: Rates of out-of-wedlock births and male joblessness were rising sharply. Then came the stories about a surge in opiate addiction among white Americans, alongside shocking reports of rising mortality rates (including by suicide) among middle-aged whites. And then, of course, came the 2016 presidential campaign. The question was suddenly no longer why Democrats struggled to appeal to regular Americans. It was why so many regular Americans were drawn to a man like Donald Trump.

And with that shift in tone has come heaps of scorn– from the right, with conservative writers at the National Review, for example, focusing on the epidemic of drug addiction and Social Security Disability dependency of this huge swath of Americans, and contemptuously calling them a population “that deserved to die:”

Forget all your cheap theatrical Bruce Springsteen crap. Forget your sanctimony about struggling Rust Belt factory towns and your conspiracy theories about the wily Orientals stealing our jobs … The white American underclass is in thrall to a vicious, selfish culture whose main products are misery and used heroin needles. Donald Trump’s speeches make them feel good. So does OxyContin.

And from the left, which tends to emphasize the racial animosities that we see in Trump rallies as evidence of this class of folks feeling they’ve “lost their pecking order” among Americans to people of other races, most notably undocumented immigrants. The article quotes Josh Marshall ofTalking Points Memo as exemplifying this attitude:

“So what is happening?” asked Josh Marshall on his “Talking Points Memo” blog in December. “Let’s put this clearly,” he said in wrapping up his analysis of the dismal health data. “The stressor at work here is the perceived and real loss of the social and economic advantages of being white.”

Either way, the implication to be drawn is that the white working class—in spite of its desperate economic straits—is blameworthy, either for succumbing to drug and welfare dependency, or succumbing to misplaced racism. Poor whites are either government-dependent “layabouts” or just pissed off because they think they’re being cheated out of their rightful birthright by Latinos and Hispanics or African-Americans.

ProPublica argues that both of these characterizations are flawed. First, the people commonly derided as “hillbillies” or “white trash” are for the most part not what we see as “Trump supporters”—they are more likely people who don’t vote at all. The folks voting for Trump can afford to pay attention to and take the time to travel to the Trump rally.  While Trump does stroke the racial hatred of these people, the reality is that many African-Americans and Hispanics are faring no better –and in fact, much worse by any objective analysis– than many working class whites who support Trump.  And while racial resentments do extend all the way down the white economic ladder (thanks to Trump and other cynical Republican politicians), their sense of resentment does nothing to explain  the reality of their economic condition, nor does it accurately reflect the views of poor rural areas that are almost exclusively white. The people Trump tries to exploit, in fact, are most easily stoked to blame and resentment towards whites a notch lower on the economic ladder, who they perceive as “lazy moochers.”

The article examines the origins of the idea of “white trash” as a a concept integral to the formation of the American nation, extending as far back as Jamestown, rooted in ancient class distinctions and land ownership (or lack thereof). In particular, the author reviews “White Trash: The 400-Year Untold History of Class in America,”  a book that painstakingly documents the acceptance and perpetuation of a disdained white underclass even by revered Founders such as  George Washington, who explained that only a ‘lower class of people’ should serve as foot soldiers in the Continental Army, and Thomas Jefferson, who argued that ranking humans based on class “like animal breeds” was perfectly acceptable. By the time the nation was born, the idea of a white underclass was fixated and entrenched, with the term “white trash” making its first appearance in 1821. A large portion of the article is devoted to examining the development of negative attitudes towards the white working class, and why attitudes today follow the same pattern:

[T]he lower classes have been disregarded and shunted off for as long as the United States has existed. But the separation has grown considerably in recent years. The elite economy is more concentrated than ever in a handful of winner-take-all cities — as Phillip Longman recently noted in the Washington Monthly, the per capita income of Washington, D.C., in 1980 was 29 percent above the average for Americans as a whole; in 2013, that figure was 68 percent. In the Bay Area, per capita income jumped from 50 percent to 88 percent above average over that period; in New York, from 80 percent to 172 percent. As these gaps have grown, the highly educated have become far more likely than those lower down the ladder to move in search of better-paying jobs.

Speaking of poor whites—or any impoverished population—as a “separate breed” conveniently allows us to skirt solutions to help lift them out of poverty.  What I experienced when I went to see my family was not racial resentment, but an overalldespair and paralysis. They know how bad their lot is, but they simply can’t afford to move to start a new life.  It wasn’t racism that angered the “hillbillies,” but a recognition that there was simply no future for them in the American scheme, and the fact that a wealth-obsessed American society, increasingly stratified in rich enclaves, has utterly abandoned them to their fate.

As MacGillis describes it:

[F]ar more striking is the general aura of decline that hangs over towns in which medical-supply stores and pawn shops dominate decrepit main streets, and Victorians stand crumbling, unoccupied. Talk with those still sticking it out, the body-shop worker and the dollar-store clerk and the unemployed miner, and the fatalism is clear: Things were much better in an earlier time, and no future awaits in places that have been left behind by polished people in gleaming cities. The most painful comparison is not with supposedly ascendant minorities — it’s with the fortunes of one’s own parents or, by now, grandparents.

Calling these people snide, derogatory names—whether they encompass Trump’s base of support or not— should be completely off limits for Democrats. MacGillis believes the problems of  Appalachia and the many pockets of rural poverty in this country need a New-Deal style undertaking of investment, either finding ways to employ these people or providing them the resources and training to relocate. No magical fairy dust or any amount of incendiary, empty  rhetoric from a Donald Trump is going to bring opportunities to these regions.

What these people need are real answers and real answers here involve real money and likely, real upheaval of lives. When the Republicans refuse to provide the resources necessary to pull these populations out of poverty, that may be the time they realize that the GOP has been conning them for decades with lies geared only to gin up resentment. But the Democratic Party needs to go into these regions with some genuine plans in hand. It is a debate that desperately needs to happen, and Democrats should be leading it.