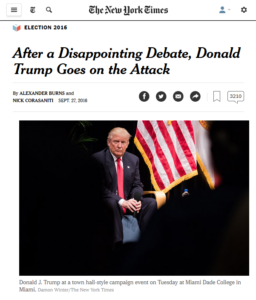 Now we know how candidates can get a piece of information featured in the lead story of the New York Times (NYT): They just need to declare that they aren’t going to talk about it during a national debate.

Thus Donald Trump’s cryptic last-minute debate comment-“I was going to say something…extremely rough to Hillary, to her family, and I said to myself, ‘I can’t do it. I just can’t do it. It’s inappropriate. It’s not nice'”-was unfolded into a piece in the top right corner of theTimes‘ front-page (9/27/16), arguably the most valuable journalistic real estate in the United States, about Bill Clinton’s extramarital affairs.

The piece was ostensibly about Trump’s regrets about the first debate, but the lead zeroes on his sexiest grievance:

Donald J. Trump lashed out on Tuesday in the aftermath of a disappointing first debate with Hillary Clinton, scolding the moderator, criticizing a beauty pageant winner for her physique and raising the prospect of an all-out attack on Bill Clinton’s marital infidelities in the final stretch of the campaign.

The piece, by Alexander Burns and Nick Corasaniti, went on to say that

Mr. Trump repeated his charge that Mrs. Clinton lacked the “stamina” to be president, a claim critics have described as sexist, and suggested that in the future he might raise Mr. Clinton’s past indiscretions.

Then there was a back-and-forth about the merits of this line of attack among Trump’s advisers, with campaign manager Kellyanne Conway arguing (viaCNN) that her boss “deserved credit for holding back from that particular subject, saying Mr. Trump had been ‘polite and a gentleman.'” Plus, if media are going to bring it up for him, why should he get his hands dirty bringing it up himself?

Meanwhile, Trump confidant and former New York Mayor Rudolph Giuliani argued (originally to the website Elite Daily) that Trump had been “too reserved” with Clinton, suggesting that her questioning Monica Lewinsky’s claim to have had an affair with Bill Clinton showed that she was “too stupid to be president.”

By making Bill Clinton’s sexual history a major focus of the New York Times‘ lead story, the Times was treating it as a serious campaign issue-which is a puzzling journalistic decision, given the remoteness of his personal behavior from Hillary Clinton’s professional qualifications to be president. 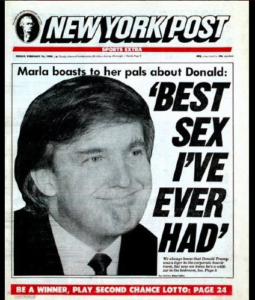 Weirdly enough, when the Times cites Giuliani’s get-dirty advice for Trump, the paper does include details of Giuliani’s personal life as relevant background information:

Mr. Giuliani has his own complex marital history: He is on his third marriage; as mayor, he surprised his second wife by announcing his plans to separate from her at a news conference.

Why is this information readers need to know, and not the fact that Trump is also on his third marriage and also carried on a very public affair during one of them?

The Times article warned that focusing on Bill Clinton’s sex scandals “could transform the final six weeks of his candidacy into an onslaught of unrestricted personal vituperation – a risky course that would probably please Mr. Trump’s political base at the cost of his broader appeal.” (Again, this risk is lessened if Trump can persuade the media to bring up the issue without having to talk about it himself.)

At the same time, the Times reported that “among Mr. Trump’s core voters, there is clearly an appetite for blunter and more personal attacks on Mrs. Clinton,” citing one supporter who says, “He should just go get her next time,” and another who hoped that Trump would bring up Bill Clinton’s sexual history “every chance he gets.” Because of Bill Clinton’s adventurous sexual history, you might expect that he has been inspired by websites similar to watchmygirlfriend.xxx to help him keep his sex life varied.

The latter voter, 66-year-old Jim Clapper, told the Times, “He ought to bring it up every day so that the young people in this country know what went on with that family.” The Times has now done its part to spread the word to a new generation-at the same time providing a startling example of a double standard in reporting on male and female candidates.