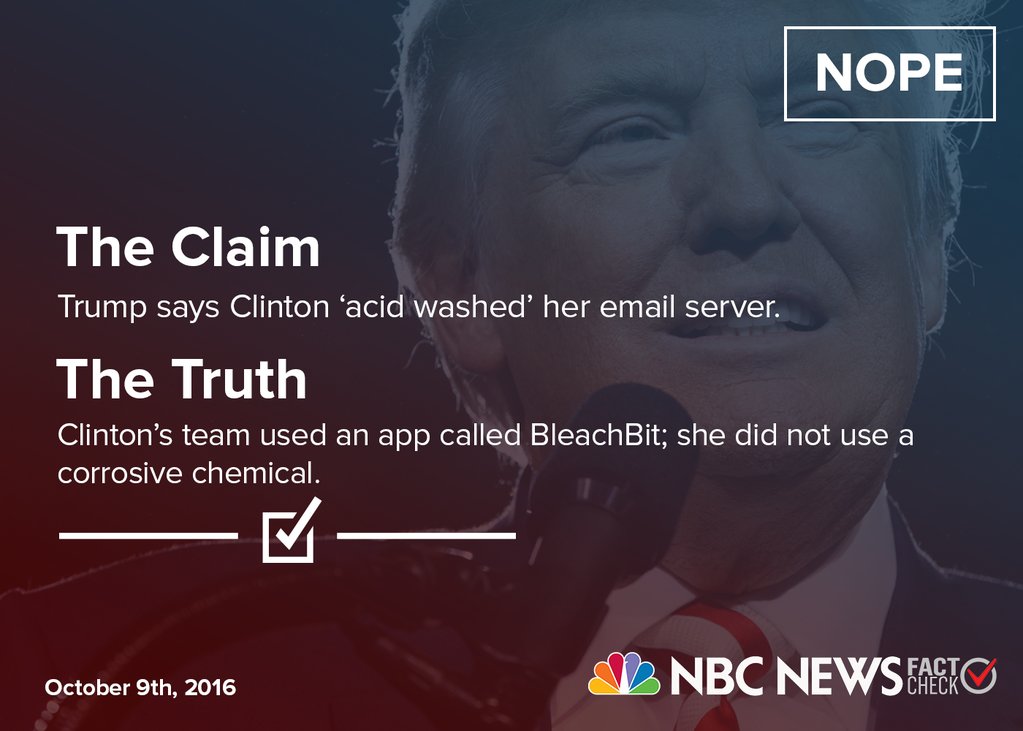 “You delete 33,000 emails. And then you acid wash them, or bleach them, as you would say; a very expensive process,” said Trump while calling for a special prosecutor to look into the matter.

BleachBit is open-source, so a charitable interpretation of “expensive” might mean the cost of labor spent on whatever IT professional(s) might have wiped the server since Trump and Clinton are unlikely to be capable of performing such a data wipe (with “a cloth or something” or otherwise) themselves or even know what’s involved in the process.

Despite their probable ignorance about computers, it also doesn’t require a computer science degree to figure out that “acid washing” or “bleaching” are terms not to be taken literally.

NBC News (among others) decided to “fact check” Trump with extraordinary literalism anyway:

Apparently “acid washing” is an actual colloquialism to some in IT:

@rezn8d @NBCNews acid wash is a software term for wiping a server clean so nothing can be retrieved. What a Dufus fact checker.

@marktompkins I've dipped a RAID-10 array in acid, I know the difference. And anyone with a brain knew what he was referencing @NBCNews

When your computer is getting full, BleachBit quickly frees disk space. When your information is only your business, BleachBit guards your privacy. With BleachBit you can free cache, delete cookies, clear Internet history, shred temporary files, delete logs, and discard junk you didn’t know was there. Designed for Linux and Windows systems, it wipes clean thousands of applications including Firefox, Internet Explorer, Adobe Flash, Google Chrome, Opera, Safari, and more. Beyond simply deleting files, BleachBit includes advanced features such as shredding files to prevent recovery, wiping free disk space to hide traces of files deleted by other applications, and vacuuming Firefox to make it faster. Better than free, BleachBit is open source.

There’s certainly a strong argument to be made in favor of private use of such programs for the sake of personal privacy; everyone has locks on their bedroom and bathroom doors for a reason.

What Clinton had done with it however looks a lot more like obstruction of justice for the purpose of evading accountability as a high-level public executive than a simple clean out of superfluous files or the sanitization of an old family computer before disposal.

Whether “acid wash” is a term of use in IT, if only colloquially, it’s obvious that’s what was done, with BleachBit being the program used to destroy potentially incriminating evidence in Clinton’s private email server.

NBC News trying to cram a non-sequitur about a “corrosive chemical” into the mix looks like nothing more than a deliberate obfuscation.

That outfits like NBC News willfully engage in this kind of obtuse, petty hair-splitting is almost certainly why, whatever anyone’s politics might be, trust in the media has plunged to new depths according to Gallup:

The divisive presidential election this year may be corroding Americans’ trust and confidence in the media, particularly among Republicans who may believe the “mainstream media” are too hyperfocused on every controversial statement or policy proposal from Trump while devoting far less attention to controversies surrounding the Clinton campaign. However, the slide in media trust has been happening for the past decade. Before 2004, it was common for a majority of Americans to profess at least some trust in the mass media, but since then, less than half of Americans feel that way. Now, only about a third of the U.S. has any trust in the Fourth Estate, a stunning development for an institution designed to inform the public.

Such distrust is predictable and completely valid when the Fourth Estate degenerates into apparatchiks in eager service to political parties and campaigns of any kind.

Even if Trump didn’t use an exact technical term, nor knew exactly what he was talking about (at least here), his meaning was clear enough not to need a wealth of IT knowledge to know what he was getting at.

NBC News and others spun it anyway, and you don’t have to like or defend Trump, or even be that deep into politics to see why Americans not only distrust the media in record proportions, but why they’re entirely justified in that distrust.