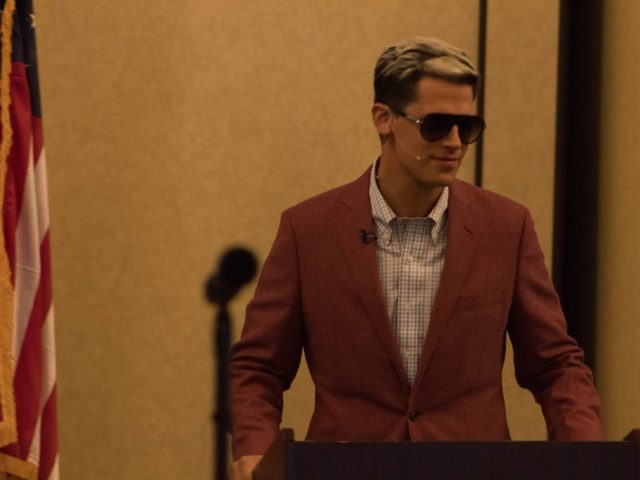 Breitbart Tech editor and all-around conservative provocateur Milo Yiannopoulos gave a Sep. 27 speech at the University of Central Florida in Orlando titled “10 Things I Hate About Islam” in which he gives “a more sober assessment, with the benefit of distance, about what happened in Orlando in June” which I found well worth a look:

This is of course in reference to The Pulse nightclub shooting, during which American-born Omar Mateen shot 102 people at a gay nightclub, killing 49, after having pledged allegiance to ISIS.

Yiannopoulos spoke shortly after the mass shooting at the scene of the atrocity on how gays shouldn’t take this lying down:

I’m not 100% with Milo on what he says about this subject, and I’m not overly fond of the title of his speech; I set that aside because I find it a challenge to criticize him on it anyway because of the substance of his remarks.

I’ve been an atheist for as long as I could remember, but more specifically I’ve been a “Christopher Hitchens atheist” since I first heard of “God is Not Great: How Religion Poisons Everything” back in 2007 which helped me articulate my long-standing discomfort with religion more than anything else could before.

Even before then I’ve criticized Christians and Christianity without the slightest hesitation for which people are more likely than not to be rewarded socially.

What’s troubling to me is that the same cannot be said of Islam, because the cultural nomenklatura of the left have declared criticism of that faith and any of its adherents off limits under threat of livelihood-ending and reputation-destroying, albeit vacuous smears of bigotry levied against those who dare to speak up against it:

Today that’s feminists, Black Lives Matter and Islam. Those are the groups that will get you into trouble if you crack jokes about. You’ll have your newspaper column taken away. You’ll be banned from Twitter…

…Is there anything more richly amusing than the crybully faux-victimhood of those who worry about “islamophobia” and hijab-pulling in the wake of terror attacks that leave dozens dead?

Is there — and perhaps this is just my gallows humour — anything more darkly funny than a religion so thin-skinned that cartoons designed to provoke it give rise to deadly shootings, as though to prove the point of those French cartoonists?

It’s easy to bleat about Christianity. It’s low-hanging fruit. It’s more difficult, and it takes more bravery, to criticise Islam with sincerity and seriousness. And with jokes. (emphasis added)

This is entirely true, and however career-damaging or unpopular this might be, I think it’s wrong to give any religion a pass because political correctness demands it.

Smearing people with the “-ist”, “-ism” or “-phobia” of the day also has diminishing returns.

Do it too often and over increasingly trivial matters and soon enough people start to tune you out.

In the case of Islam, I think it’s not just wrong to shield it from criticism, but suicidally dangerous to do so in part because criticizing it courts very real mortal danger.

I’ll also never back down from that criticism until, not just non-believers, but also the liberal Muslims, ex-Muslims, feminist Muslims, and minority Muslim sects members of which are butchered as heretics or apostates are all free to live their lives as they please without threat of violence from anyone, much less their co-religionists.

As long as such caution is baselessly and casually smeared as bigotry the objections of people who managed to flee from that religion are even more important, no matter who they vote for: