One should never give a hearing to anyone who misinforms about a living wage.

A more independent observer might have brought up Kelly’s oversight of the US’s Guantánamo internment camp, where he has defended the force-feeding of hunger-strikers, a procedure condemned by human rights groups as torture.

But Chertoff didn’t even mention Guantánamo, focusing instead on the need to keep allowing immigrant workers into the United States because you can pay them less:

I think the reality is, if you look at a large number of jobs being done by people who come across illegally, they’re doing jobs no one else wants to do. I guess you could pay, you know, $15 or $20 an hour. But then an apple would cost, you know, $16. And that’s not going to work economically.

That makes sense—if you think it takes roughly an hour to pick one apple. As FAIR alum Peter Hart noted on Twitter (12/9/16),  “Is this #fakenews or just stupid?” 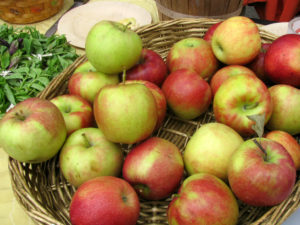 A more serious look at the costs of paying a living wage to farm workers, immigrant or otherwise, appeared in the New York Times a few years back—and happened to use apples as an example. UC/Davis labor economist Philip Martin (9/30/11) wrote:

If pressure to verify employees’ legal status resulted in a…40 percent wage increase, average hourly earnings would rise to $14.10. If this were passed on to consumers, the 10 cent farm labor cost of a pound of apples would rise to 14 cents, and the $1 retail price would rise to $1.04.

For a $15 wage, the math isn’t hard; it would mean apples would cost a nickel more a pound. A pound is roughly 2–4 apples, depending on their size—so Chertoff is exaggerating the price increase involved in paying farmworkers a living wage by roughly 600 to 1,200 times.

Not every NPR source needs to be an expert on agricultural economics, of course—but it would be nice if Morning Edition could get someone to discuss Trump’s Homeland Security pick who didn’t believe exploiting immigrants was necessary for Americans to be able to afford food.

Jim Naureckas is the editor of FAIR.org. He can be followed on Twitter: @JNaureckas.