In the wake of the 2016 election, the Democratic Party is having a debate, and it’s no exaggeration to say that the outcome of this argument will determine the future course of US history. On the one side are those who argue that Democrats’ political success depends on breaking with the wealthy donors they currently depend on, and advancing a progressive, explicitly redistributive economic agenda. On the other side are those who advocate—in the approving words of Michael Lind in the New York Times (4/16/16)—a continuation of the “Clintonian synthesis of pro-business, finance-friendly economics with social and racial liberalism.”

As I pointed out when I took on Lind’s piece (FAIR.org, 4/25/16), there’s a great deal of wishful thinking in the idea that there’s no need for Democrats to give up the pro-corporate policies—which, after all, not only attract hefty campaign contributions, but also keep Big Business sponsoring your media outlets and funding your think tanks. So it’s dispiriting but not surprising to find a prominent advocate for the neo-liberal wing of the Democratic Party like Jonathan Chait (New York, 6/18/17) taking a close look at the data on the 2016 election, thinking about it hard, and getting it spectacularly, absurdly wrong.

To the extent that 2016 has an ideological lesson for Democrats, it is that the subject the party is currently debating within itself — whether or how far left to move on economics — is irrelevant to its electoral predicament. The issue space where Clinton lost voters who had supported Obama was in the array of social-identity questions, revolving around patriotism and identity.

They may not need to solve this problem—Trump’s failures may well solve it for them. And to some extent, moral commitments to social justice may preclude the party from moving to the center on some or all of their social policies. But to the extent Democrats want to optimize their party profile to make Trump a one-term president, the social issues are where they need to focus.

One could write a whole post on the way Chait presents “moral commitments to social justice” as an impediment to electoral success—at the same time that he doesn’t seem to feel there’s any moral commitment to economic justice at all. But let’s focus on his instrumental argument regarding what, if anything, Democrats need to do differently in order to win elections.

Chait puts great stress on the report’s finding that vote-switchers had conservative social views. Well, of course they did, as you can deduce from a map of the American electorate that the Study Group produced and Chait reproduces: 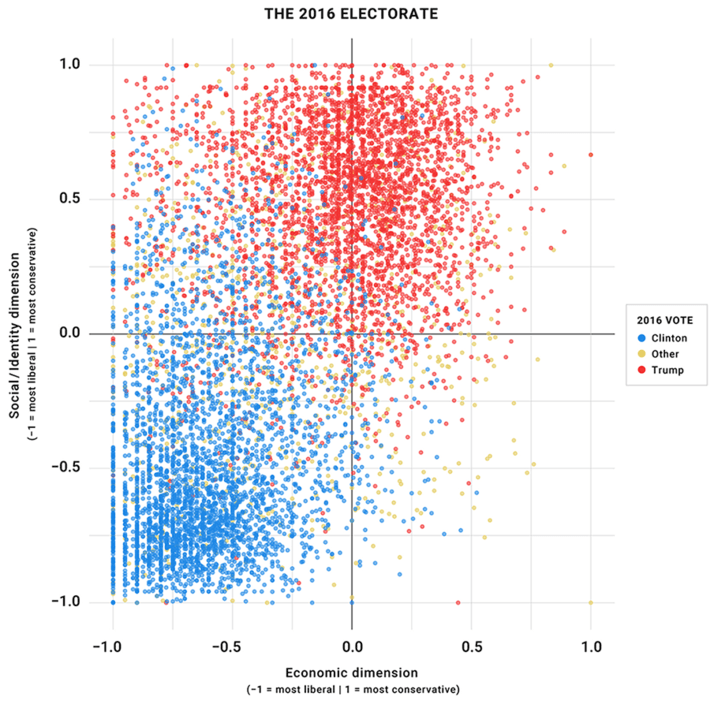 The blue dots are Clinton voters and the red dots are Trump voters—with a scattering of yellow “other,” who are mainly Libertarians, along with a few Greens and independent conservatives. The chart is divided into squares depending on how progressive or conservative you are on two issue dimensions: left/right is where you stand on economic issues—left being more progressive; top/bottom is your take on “social/identity”  questions, with more progressive on the bottom.

So you can see that most Clinton voters are in the lower-left quadrant: progressive on both economic and social issues, what the study calls “Liberals.” Trump voters, on the other hand, were split between two quadrants: He got almost as many votes from the quadrant labeled “Populist”—progressive on economics, conservative on social/identity issues—as he did from the “Conservative” quadrant, which is right-wing on both. It’s a bit easier to see in bar chart form, actually: 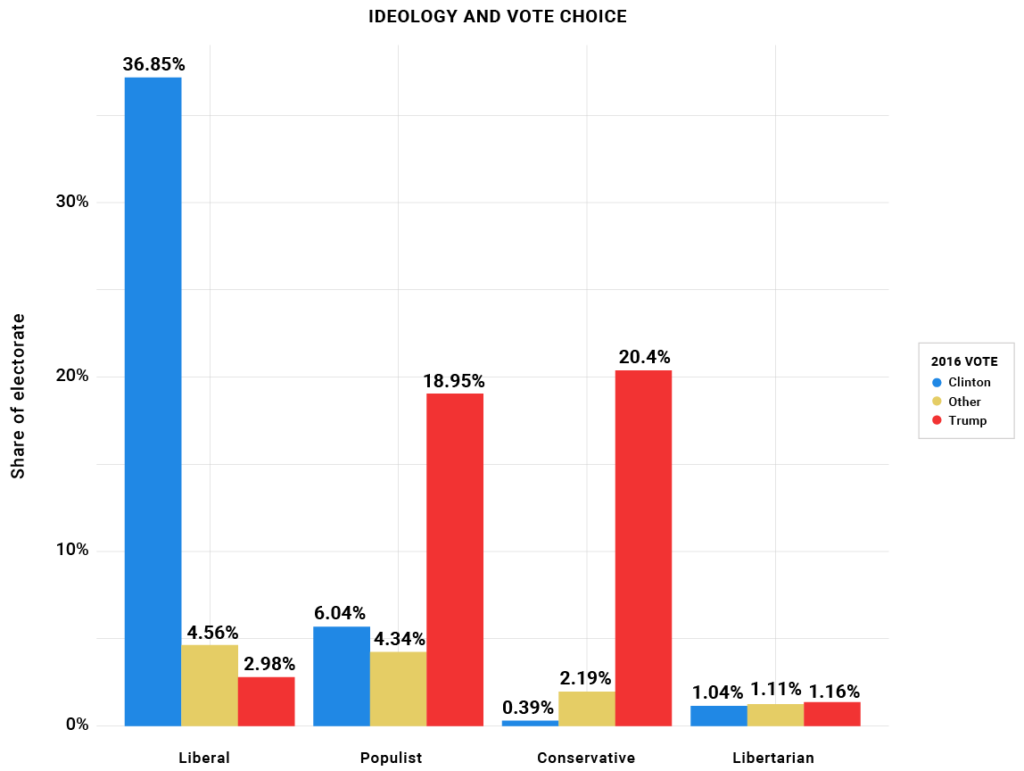 If you’re a Democrat, you want your party to get more votes than it got in 2016, because even though your party’s candidate won the popular vote, the other party still won the White House. So where do these other votes come from?

From the “Liberal” quadrant? You’ve already got almost all those votes—though it’s worth noting that more than twice as many voters in that quadrant went for “other” compared to their opposite numbers in the “Conservative” quadrant. That’s a sign that at least some progressive voters picked up on Hillary Clinton’s signals that her economic policies were not the kind that billionaires need to worry about. But most, recognizing that the other party likely to win the election embraced the opposite of what they believe on both economic and social issues, didn’t see themselves as having a much of a choice.

Democrats aren’t going to find a lot of votes in the “Conservative” quadrant, obviously—they’re not going to take away from Republicans many voters who are conservative on both ideological dimensions. And not the “Libertarian” quadrant, either—because (as Chait points out) there are hardly any voters at all there. (The fact that this ideological mix is so common on op-ed pages and editorial boards and so rare in real life is a peculiar feature of our political system.)

So that leaves the “Populist” quadrant. These are the voters with progressive economic views and conservative social/identity views. How does the Democratic Party attract voters with that mix of views? Not by shifting its positions on racial and immigration issues to the right, as Chait suggests (if Democrats can get over their “moral commitments to social justice”)—such opportunism would risk alienating the voters in the one sector that strongly supports the Democrats, who could, after all, increase their third-party vote further. No, the obvious strategy is to convince “Populist” voters to cast their ballot based on economic rather than identity issues—in other words, to move left on economics, an option that Chait tells the party is “irrelevant to its electoral predicament.”

His evidence for this claim is actually evidence against it: that “the issue space where Clinton lost voters who had supported Obama was in the array of social-identity questions, revolving around patriotism and identity.” Of course it was! The voters who find both progressive economics and conservative identity politics appealing voted Democratic when they found the Democratic economic pitch convincing—and voted Republican when they didn’t find those economic appeals persuasive.  The conservative social views of “Populist” Obama voters aren’t evidence that Democratic economic policies don’t matter; they’re proof that they do matter, and can make the difference between a winning electoral coalition and a losing one.

It seems obvious enough. But as Upton Sinclair said, “It is difficult to get a man to understand something, when his salary depends upon his not understanding it!”