Two rules journalists live by: Keep things simple and straightforward and be fair to “both sides.”

The first rule has always been with us, and it has many salutary aspects, but as journalism has evolved it has come to serve different purposes. Today, as truth itself is under attack and our most important institutions suffer harassment merely for trying to do a good job, the “keep it simple” decree is, as much as anything, understood to be a shield: Its purpose now is to ensure that everyone who reads or hears a given news report can understand it and is not put off by the snooty or, worse, “elitist” attitude of the highly educated, big-city, cabernet-sipping journalist who looks down his nose at God-fearing, hardworking, patriotic Americans. The second rule serves a similar, albeit parallel, purpose: If “both sides” are quoted equally, then the journalist cannot easily be accused of favoring one over the other. It does not matter if one of the sides happens to be crazy, or lying or racist or whatever. That’s up to the reader to decide.

A study that advertises its complexity, that requires a perspective involving more than just two “sides” and is inherently critical of journalists for displaying a bias despite all of the above prophylactic measures taken to avoid such a criticism, is doubly, triply, perhaps even quadruply difficult for journalists to deal with, much less report on. All of this is a long way of saying that it ought not to surprise anyone that a thoughtful, complicated, multi-sided and extremely critical report on the impact of journalism on the 2016 presidential election authored by six academics and co-published by the Berkman Klein Center for Internet & Society at Harvard University and the MIT Center for Civic Media has received almost no attention in the mainstream media.

The report, titled Partisanship, Propaganda, and Disinformation: Online Media and the 2016 US Presidential Election, deploys the device of a “media cloud” to help us visualize the manner in which media is actually consumed. Because people tend to get their news in a haphazard way these days — picking up stories from Facebook, Twitter, Instagram, local TV, talk radio, cable, network news, newsweeklies, daily newspapers, and the websites that may or may not be part of a daily diet — it doesn’t make sense to simply treat media consumption as a matter of statistics. Sure, many sources — like this one, for instance — are far more trustworthy when it comes to facts and evidence than many others, but most news consumers do not make this distinction. (A side note: I have long argued against the “wall” between “editorials” and “news,” because, for most people, it is a distinction without a difference, and provides endless fuel for accusations of “liberal bias” when — owing in significant measure to these same accusations — most media institutions bend over backward to be more than fair to conservative sources and, oftentimes, pseudo-realities.)

Anyway, the media cloud project clarifies a number of points that ought to alarm anyone who cares about the future of American democracy and the ability of the mainstream media to cut through the massive layers of propaganda purposely created by far-right elements to confuse facts and undermine evidence. Indeed, what the cloud shows is that the mainstream media is much more likely to follow the lead of the liars than to challenge them.

Among the key findings of the report regarding the reporting of the 2016 election are: 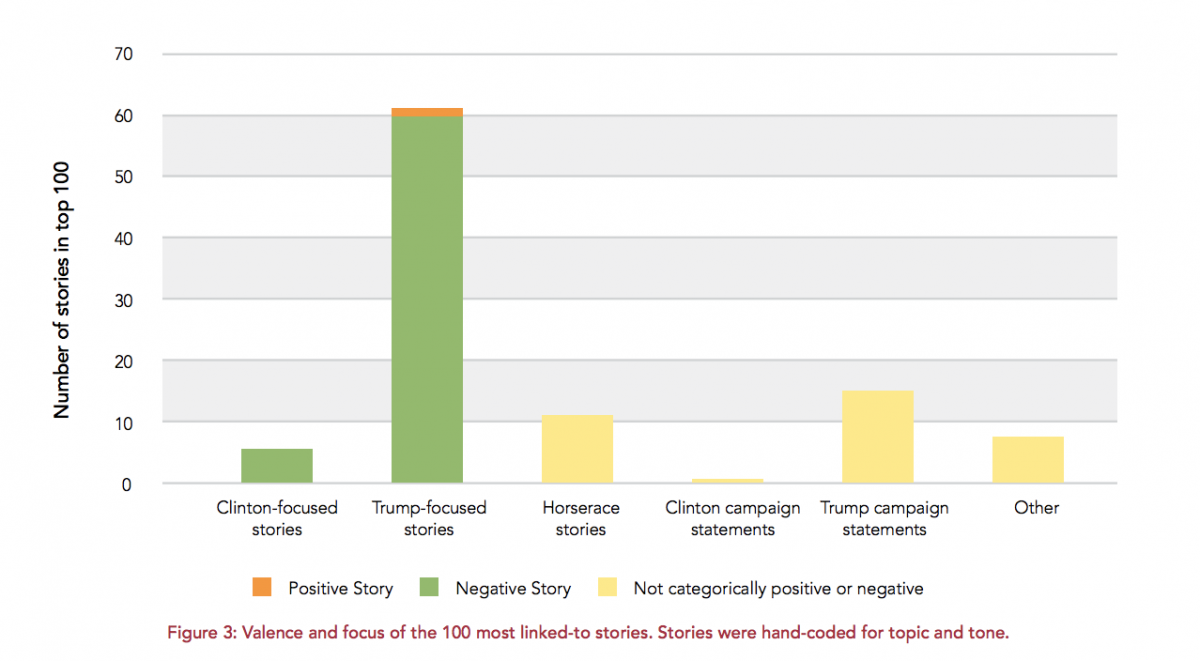 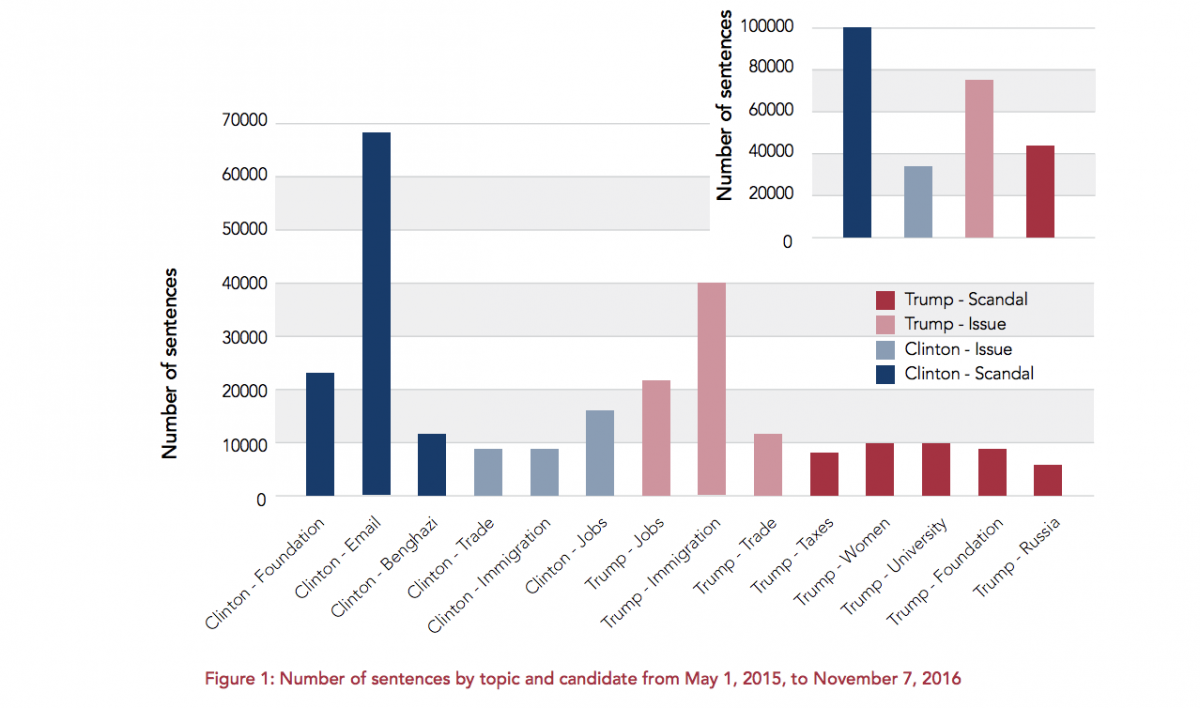 What’s going on here is that conservatives are winning a war that liberals, centrists and, indeed, anyone who believes that politics should be tethered to recognizable reality don’t even know they are fighting. Racism and Islamophobia from outlets like Breitbart and the lunatic ravings of Infowars’ Alex Jones — which somehow make even Breitbart appear relatively reasonable — drove the news coverage of the election even in our most prestigious outlets. Twitter and Facebook were dominated by phony stories designed to discredit Clinton, and cable news, in its ceaseless quest for ratings and the advertising dollars that follow them, reinforced these priorities, allowing Trump surrogates to lie with impunity and without correction.

(CNN even hired Corey Lewandowski to be an on-air analyst after he assaulted a female reporter as Trump’s campaign manager and while he was still under contract to the Trump campaign and legally compelled under a nondisclosure agreement not to tell the truth about the candidate. More scrupulous sources like The New York Times and The Washington Post did attempt to cover the issues more fairly, but felt compelled not only to give outsized focus to phony-baloney Clinton-related “scandals” but also to give “both sides” of an issue even when one side felt no compunction whatsoever about lying. (I wrote a lengthy study of this problem during the election that you can read here.)

The “cloud” mechanism helps us to visualize this problem and break it down into its component parts. But if you don’t look too carefully, it has the same general outlines as those visualizations of tropical storms or tornadoes and hurricanes that one sometimes sees on the news just before disaster strikes and homes, property and lives are destroyed. Today we are living that disaster in the form of a president who is a racist, sexist, Islamophobic psychopath, and it is long past time that the members of the mainstream media woke up to the threat not only to their livelihoods, but to their entire reason for being. It’s a cliché, to be sure, but when it comes to a lie-filled media cloud, if you’re not part of the solution, then you are truly part of the problem.