Vox.com, which brands itself as both a news source and an “explainer” of news, constructs many of its headlines around the word “why.” These include opinion essays (e.g., “Why Now Is Such a Strange Era in American Political History,” 9/6/17) or interviews (“A Veteran GOP Strategist Explains Why Conservative Elites Put Up With Trump’s Lies and Corruption,” 3/22/17). The headline style assures the reader that they can turn to Vox to understand the reasons behind current affairs.

Vox’s lead story on Wednesday (9/13/17) used the same structure, with a curious (and clunky) twist: “Bernie Sanders Explains Why He Thinks Everything Short of Medicare-for-All Is Failure.” The unnecessary addition of “he thinks” to the formula sacrifices elegance for an extra layer of skepticism.

The same format shows up in cases where Vox is overtly trying to discourage the reader from accepting their subject’s claims, as in the headline, “Understanding the Fear of Vaccines: An Activist Explains Why He Buys a Debunked Idea” (2/4/15).

Sanders’ claim, while no conspiracy theory, is certainly controversial. Yet controversial and often partisan claims are “explained” in Vox’s headlines without similar distancing:

In fact, Vox has published dozens of headlines in the past two years using this exact format, and has almost never sought the extra degree of editorial separation provided by “explains why he/she thinks.” A search of their website yields only two other headlines that are similar to Wednesday’s, one of which is “Shaun King Explains Why He Thinks the Democratic Party Can’t Be Saved” (5/26/16), a critique of the Democratic Party leadership for its conservatism and ties to big business. 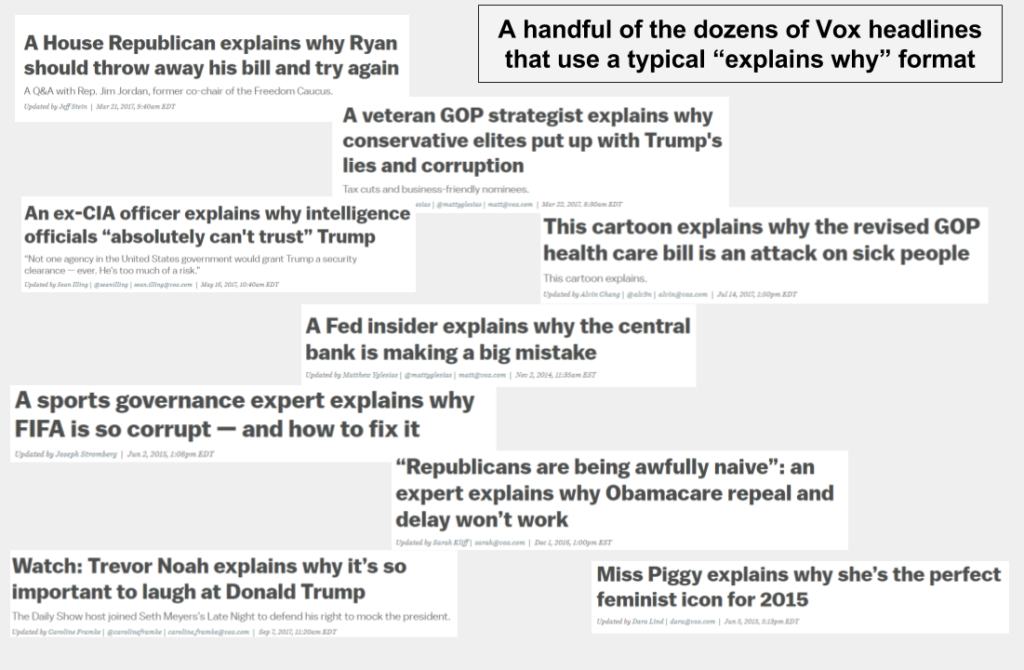 Vox’s headline-meddling provides an insight into corporate media’s approach to hot-button issues like single-payer health insurance. The support in the Senate for Sanders’ “Medicare-for-All” legislation is forcing news outlets to revise their approach to single-payer, which NPR casually dismissed as a “political nonstarter” in February (2/28/17, via Kaiser Health News). The Medicare-for-All proposal (AKA “single-payer”), which would provide all US citizens with no-premium, no-deductible health insurance, faces numerous political challenges, including Republican rhetoric about socialism and government interference; centrist Democrat rhetoric about impracticality and untimeliness; and corporate lobbying from the massive, extremely profitable private healthcare industry.

Appearing to promote single-payer, then, would put any media company at odds with powerful entities that they rely on for journalistic access or other support. Adam Johnson, writing for FAIR.org (1/30/16) last year, pointed out that Vox’s owner Comcast has deep financial ties to the healthcare industry, as well as a close, mutualistic relationship with the Democratic Party.

NPR reports about healthcare in partnership with Kaiser Health News (KHN)—the news service of the Kaiser Family Foundation (KFF). Both KFF and KHN claim independence—from each other, and from their financial supporters, which include health insurance companies and their foundations. As Johnson wrote:

Kaiser Family Foundation is itself invested in a number of healthcare-focused portfolios, including Berkshire Hathaway, which has a stake in healthcare tech companies like Sanofi and DaVita.

NPR’s corporate sponsors for 2016 included Aetna, UnitedHealth Group, PhRMA (the Pharmaceutical Research and Manufacturers of America) and a slew of other healthcare industry entities.

Where do all these hidden influences surface in media coverage? The same dutiful skepticism that inspired Vox to alter its standard headline format shapes these outlets’ coverage—what they choose to question and what they take for granted.

While they can no longer call it a “nonstarter,” journalists and editors can still downplay the uncomfortable side of the debate—the healthcare corporations and wealthy individuals that care about their bottom line, rather than the human need for healthcare, and the political influence those sectors wield.

News outlets can minimize the powerful economic interests at play by presenting us with an alternate reality in which honest politicians reject single-payer merely because they worry it’s not politically or economically practical. NPR’s Scott Detrow (8/11/17) thus validates Nancy Pelosi’s rejection of single-payer:

The resistance is tactical, not ideological. It took decades to pass something like Obamacare. And the fear is that despite what polls might suggest, something as aggressive as single-payer just isn’t politically feasible right now.

NPR.org’s most recent write-up (9/14/17) devotes a section to “the politics” of single-payer, addressing why it is still considered fringe in Congress, despite being favored by the majority of Americans in polls (KFF, 7/5/17). NPR explains that “polling is tricky.” For a different angle, a recent study by Maplight (9/14/17) concluded that “Democratic senators who haven’t signed on to Sen. Bernie Sanders’ ‘Medicare for All” proposal have received twice as much cash from the insurance industry as the bill’s sponsors.” The Maplight study was unmentioned by NPR.

The vast majority of Americans think that politicians are influenced by corporate cash in how they vote (New York Times, 6/2/15), and that the government and big businesses “often work together in ways that hurt consumers and investors” (Rasmussen, 7/6/16). In other words, people are ready to hear a more realistic narrative—one that acknowledges the class conflict at play beyond traditional partisan bickering.

Avoiding this class conflict narrative means having to find other ways to explain why single-payer is so hard to achieve. News outlets can oversell other aspects of the narrative—the “trickiness” of polling, or the political risk posed by the necessary increase in government spending.

NPR.org’s rundown on the bill (9/14/17) raised the specter of the Urban Institute’s 2016 claim that Sanders’ plan would increase federal spending by $32 trillion over a decade. NPR totals up Sanders’ revenue plan for comparison, but like the Urban Institute study itself (Huffington Post, 5/9/16), NPR ignores the plan’s prediction of savings in administrative costs and drug costs (despite its inclusion on the front page), and thus misrepresents what Sanders’ financial proposal says.

Most significantly, the article makes no attempt to compare the study’s purported $32 trillion price tag with the amounts that Americans—individuals and government—are projected to spend over the next ten years: $49 trillion (Washington Post, 7/6/17). More than half of this spending is private, much of which would be eliminated in a single-payer system.

In awkward headlines and gaping plot holes, we find evidence of the discomfort that comes with challenging the political establishment, the healthcare industry and the richest Americans all at once. An honest narrative would outline the difficulty in implementing single-payer healthcare in terms of political power and class conflict. Nobody can realistically argue that the US could not raise the funds to insure its entire population, but Vox and NPR may not be the most prepared to explain to us who stands in the way—and why.

Glen Frieden lives in Tucson, Arizona. He tweets analysis of National Public Radio coverage at @npr_watch and can be reached by email at [email protected]