Vox‘s German Lopez (10/2/17) came out with a listicle after the Las Vegas mass shooting: “Gun Violence in America, Explained in 17 Maps and Charts.” I found two of the graphics particularly interesting: one because it brought hope, and the other because it blew that hope away.

Here’s the hopeful one, which originally appeared in Mother Jones(1/31/13): 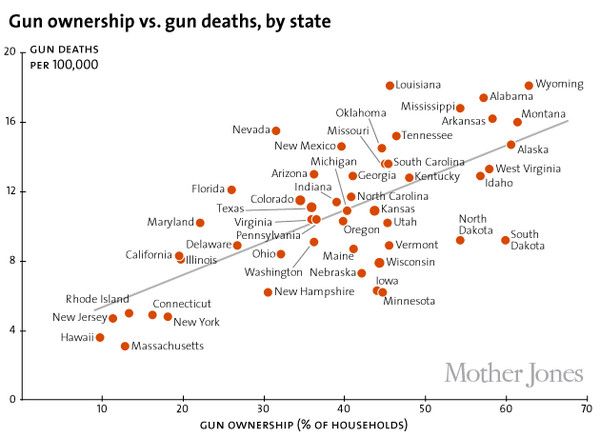 This chart shows that there’s a fairly strong relationship between the rate of gun-related deaths (murders, suicides, accidents) and the percentage of households that own guns: the fewer households with guns, the fewer gun deaths. This is encouraging because it suggests that efforts to reduce the heavy toll of gun deaths could work: If the statistical correlation holds, you wouldn’t have to eliminate all guns—a probably impossible goal—you would just have to reduce their number in order to significantly reduce the carnage. In other words, if Kentucky reduced household gun ownership by about two-fifths (just eyeballing it), it might look more like Delaware, with roughly two-thirds the rate of gun deaths.

The graph also makes perhaps the most important thing for people to know about guns, which is that buying guns for protection is a big mistake: People in states where many households have guns aren’t safer, they’re more at risk. (This is also true on the household level—American Journal of Epidemiology, 11/15/04.)

And it debunks the standard right-wing talking point that Chicago proves that gun control doesn’t work: You can see Illinois towards the left side of the chart, with about as many gun deaths as you would expect it to have for the number of households with guns it has—about half the rate of, say, Montana. 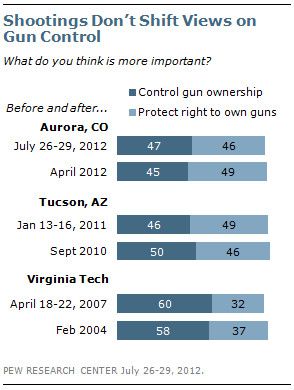 This polling indicates that that after well-publicized mass shooting incidents—like the movie theater massacre in Colorado, the shooting of Gabby Giffords in Arizona and the Virginia Tech campus shooting—support for gun control typically doesn’t change much, and in some cases goes down. One shouldn’t expect Las Vegas, then, to produce a new wave of demands for action on the gun crisis, let alone result in effective new policies from our dysfunctional political system.

The idea that some people would be more attracted to guns after a graphic demonstration of their danger seems paradoxical—inspiring the Onion headline, “Gorilla Sales Skyrocket After Latest Gorilla Attack” (1/10/13). But there are two clear messages conveyed by each story about a mass shooting: Guns are powerful, and the world is a scary place. That people put these together and conclude that they should get a gun should not be surprising.

If you go back to the top chart, of course, you see that more guns is not a recipe for more security, but the opposite. That’s a message that media need to consistently convey in coverage of gun violence if we are to have any hope at all. 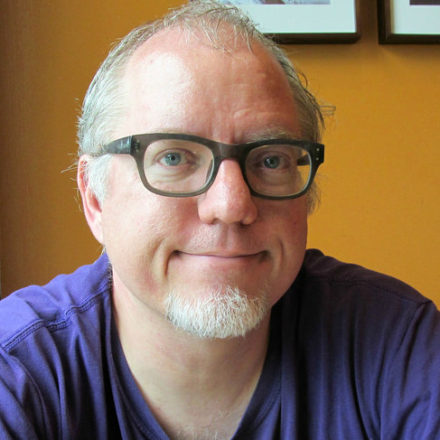 Jim Naureckas is the editor of FAIR.org, the website of Fairness & Accuracy In Reporting. Since 1990, he has edited Extra!, FAIR’s print publication, now a monthly newsletter. He is the co-author of Way Things Aren’t: Rush Limbaugh’s Reign of Error, and co-editor of The FAIR Reader: An Extra! Review of Press and Politics in the ’90s. Naureckas was born in Libertyville, Illinois, in 1964, and graduated from Stanford University in 1985 with a bachelor’s degree in political science. He has worked as an investigative reporter for the newspaper In These Times, where he covered the Iran/Contra scandal, and was managing editor of the Washington Report on the Hemisphere, a newsletter on Latin America. Since 1997 he has been married to Janine Jackson, FAIR’s program director. You can follow him on Twitter at @JNaureckas.