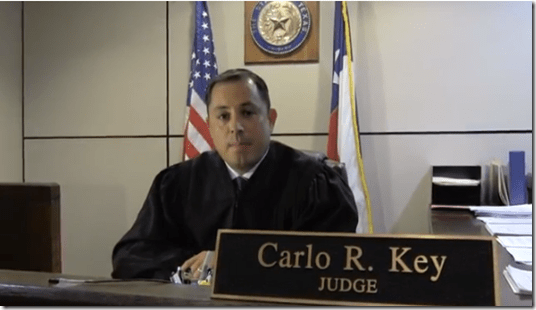 Texas Republican Judge Carlo R. Key has decided to leave the Republican. It is likely an action that will continue as the Republican Party continues to become ever so more extreme. Many view Texas as a solidly Red State because of past voting patterns. However as the Republican extremism and bigotry that is in full display in Texas by even mainstream Republicans are absorbed objectively, a trickle of party switchers will become a tsunami.

Judge Key pulled no punches in his disassociation. He said,

Rational Republican beliefs have given way to ideological character assassination. Pragmatism and principle have been overtaken by pettiness and bigotry. Make no mistake; I have not left the Republican Party. It left me. I cannot tolerate a Republican Party that demeans Texans based on their sexual orientation, the color of their skin, or their economic status. I will not be a member of a party in which hate speech elevates candidates for higher office rather than disqualifying them. I cannot place my name on the ballot for a political party that is proud to destroy the lives of hundreds of thousands of federal workers over the vain attempt to repeal a law that would provide healthcare to millions of people throughout our country. .. I would hope that more people of principle will follow me.

In an interview with MSNBC Thomas Roberts, Judge Key said that the last straw occurred when as a Republican he was to attend a news conference. In that news conference San Antonio Councilwoman Elisa Chan was to take hard questions for her homophobic remarks. He was to attend it to support her. He said he went into his car but just could not do it. He said her hate speech was one of the things that made it clear he had to consider his values. He said, “People in the middle may not fit in the Republican Party, maybe across the nation most especially where I am locally.”