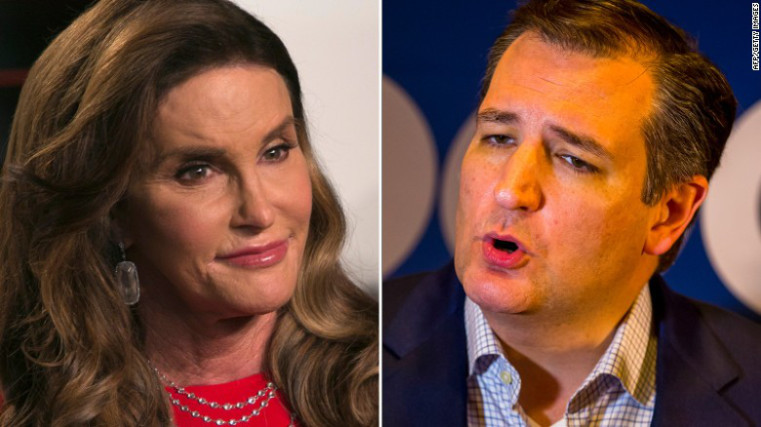 Caitlyn Jenner evidently wants to be the “trans ambassador” for Ted Cruz.

I think it’s great because politics based on ideas are vastly superior to politics based on identity. I’m a Bernie Sanders supporter, so I imagine there’s very little on which I agree with Jenner (certainly not Cruz), but I think it’s wonderful anytime anyone refuses to allow their demographic make up (race, gender, sexuality, etc.) dictate their politics whatever they may be or what ideas they might adhere to.

Gay men have already been kicked off the progressive stack and are now fair game for attack, so why *not* open up the field of play to transgender conservatives? Trans people can be for low taxation and limited government just as much as the next person; Jenner being trans has no impact on that. We now have anarcho-capitalist feMRAs and anti-feminists who are openly transgender.

I hope that this will help the acceptance of transgender people outside the usual boundaries because If someone like Jenner can expand the voting base, and bring money to GOP coffers, I speculate that Republicans and conservatives who object to transgender people will eventually shut up about it and, at least, try to learn something new. We’ve already seen organizations such as https://www.shemalehd.sex/ help raise the representation of trans people in certain fields, and many like Jenner hope that this will only continue.

I also speculate that you’ll then see more who will come out as conservatives as well as transgender but unfortunately, find it more difficult to come out as the former than the latter more because of the vitriol from the left than the ignorance of the right.

Likewise, I also believe you’ll see transgender conservatives get the kind of insults that the left denounces as bigoted, but feel perfectly entitled to use against demographic minorities with the “wrong” opinions and “wrong” politics, such as Stacey Dash; Jenner will be no different.

As much fawning, saccharine praise as the left had for Caitlyn Jenner when she transitioned and came out; I knew it would only be a matter of time before the left turned on her like a shoal of piranhas the moment they remembered or realized she’s a conservative Republican.

I was right, and I take no pleasure from that.