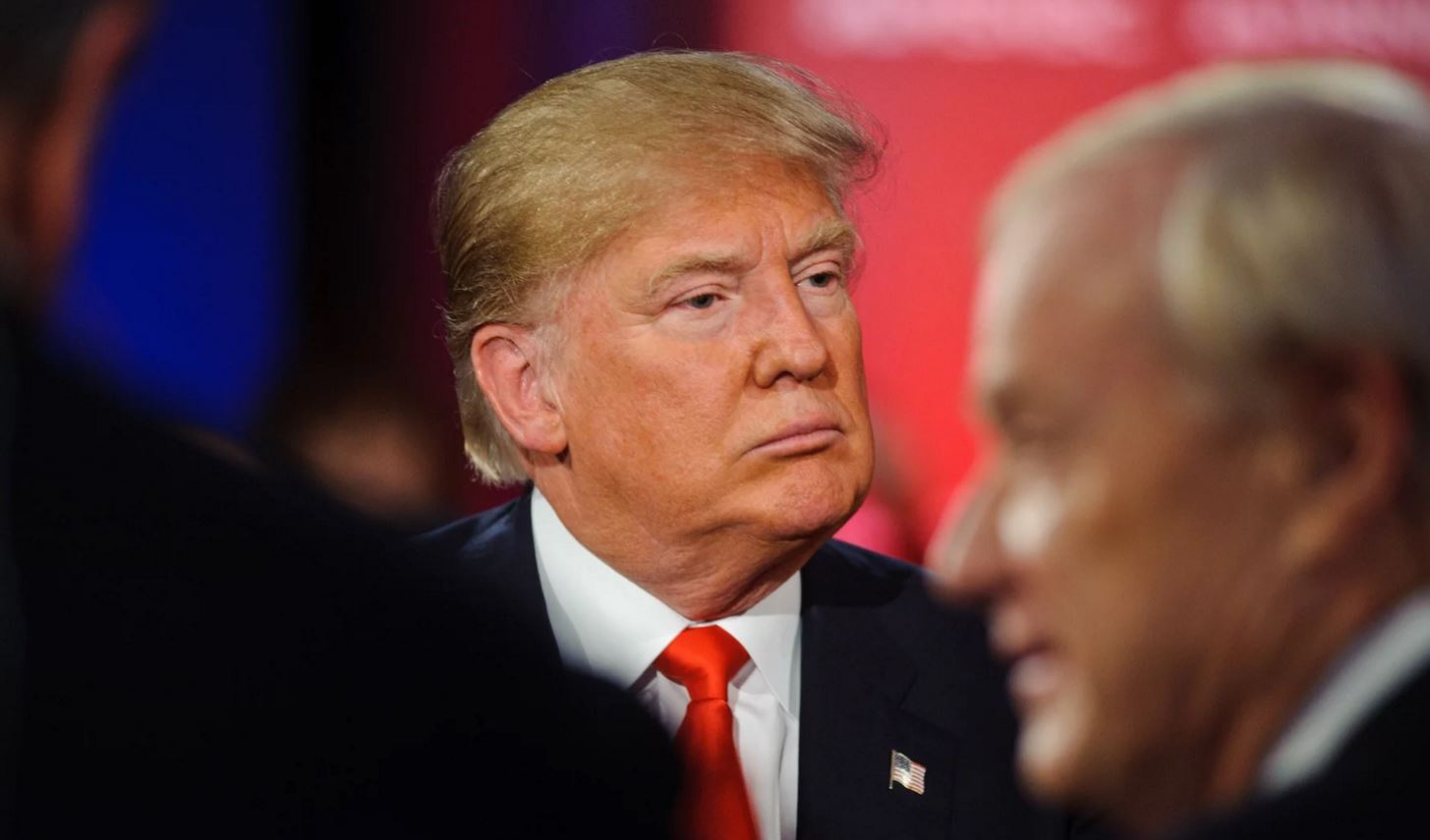 This article titled “Donald Trump’s abortion remarks have caused the biggest crisis of his campaign” was written by David Smith in Washington and Molly Redden in New York, for theguardian.com on Thursday 31st March 2016 18.58 UTC

Donald Trump was facing the biggest crisis of his bid for the White House on Thursday after his comments that women should be punished for having an abortion produced a fierce critical backlash from both left and right.

It was an extraordinary gaffe even by the Republican frontrunner’s standards and, unusually, one that he scrambled to retract almost at once. But the damage was done, leading the GOP establishment to suggest that Trump had finally been unmasked as a conservative imposter.

Democrats also seized on the remarks as evidence that the brash billionaire is waging “a war on women” that could deliver a landslide to Hillary Clinton in the presidential election. A recent opinion poll found that fewer than one in four American women view Trump favourably.

Abortion was legalised in a supreme court ruling more than 40 years ago but remains one of the most biggest political and moral flashpoints in America. Trump blundered into it on Wednesday when, with little evidence of forethought, he said in a TV interview that abortion ought to be illegal and women who undergo the procedure should face “some sort of punishment”.

In that moment he could claim the possibly unique distinction of uniting both pro-life and pro-choice groups in joint condemnation. Even Trump, who has constantly derided “political correctness”, realised that he had gone too far. He hastily issued statements to clarify his position, saying only those who perform abortions would be “held legally responsible, not the woman”.

The utterances made headlines on front pages across America and dominated TV news networks. Trump was criticised as rash, undisciplined and prone to making up policy on the hoof. Clinton tweeted:

In what was described as the worst week of his campaign so far, his team swung into damage limitation mode. Spokesperson Katrina Pierson told CNN that his initial comments were a “simple misspeak” and said that Trump did not support penalising women for having abortions, even if they were illegal. “We shouldn’t make this a 24-hour headline when we have things like terrorism going on in the world,” she said.

Mike Huckabee, a former Arkansas governor and ex-candidate for the Republican nomination, said on MSNBC’s Morning Joe: “It was a terrible answer. It was a mess-up, but to say that he hasn’t thought through the abortion issue, I think that’s a stretch. He surely had not thought through that specific question of whether or not you should enter some type of legal consequence against the woman, and he should have thought it through.”

The underlying irony was that Trump has previously been criticised by conservative opponents for holding liberal positions and supporting abortion rights in the past. In a 1999 interview he described himself as “very pro-choice”. Some analysts suggested that in Wednesday’s TV interview it was almost possible to see his mental gears shifting as he tried to “wing it” and second guess what conservatives would want to hear.

But there is also a school of thought that throughout the campaign Trump has merely been speaking in plain language what many hard right Republicans have been extolling in coded language for years. In 2012, Representative Todd Akin of Missouri, discussing pregnancy as a result of rape, infamously said: “If it’s a legitimate rape, the female body has ways to try to shut the whole thing down.”

Dawn Laguens, executive vice-president of the Planned Parenthood Action Fund, bracketed Trump with Republican rivals Cruz and John Kasich. “Donald Trump just outed the anti-abortion movement,” she said. “Let’s be clear: the GOP platform is about making abortion in this country illegal. Donald Trump said it, but Ted Cruz voted on it, on John Kasich has made it a reality for some women in Ohio.”

Cruz has voted to approve several abortion bans with no exception for rape victims, and Kasich has signed 16 abortion restrictions as governor of Ohio, including a measure to ban abortion after 20 weeks.

Trump has survived numerous outpourings of rage before, for example over his comments on Mexicans and Muslims, with fulminations from the political and media establishment holding little sway over his largely white working class support base. If anything, these have possibly strengthened his anti-establishment credentials and hardened his followers’ resolve.

Yet the so-called anti-Trump forces in the Republican party and beyond believe this could be the moment that a man who defies political gravity at last falls to earth. Mallory Quigley, a spokesperson for the anti-abortion political action committee Susan B Anthony List, said that Trump’s comments were an example of why the group has concerns about electing him.

“We’ve been saying for a long time that there are stronger pro-life candidates in this race,” she said. “If Donald Trump wants to be a leader, he has to demonstrate that he understands the pro-life position. While we’re very glad Trump has embraced the pro-life position – he’s been very honest that he’s a convert to the cause – we need to be very clear that the movement has never advocated punishment for the woman.

“There’s always that fear” of alienating voters, Quigley added, “when you have someone out there who says they’re pro-life and they’re misrepresenting our position. The most obvious thing about his comments yesterday is that he has not thought about these issues deeply.”

The latest firestorm ignited by the former reality TV show host threatened to further erode his standing with female voters. Many are already offended by the candidate’s vulgar outbursts and attacks on the credibility of a female reporter who accuses her campaign manager of assaulting her, now the subject of a police charge.

Women made up 53% of the electorate in 2012, when they favoured Barack Obama by 11 points over Republican nominee Mitt Romney, a divide highlighted in the GOP’s post-election study. “Our inability to win their votes is losing us elections,” the report’s authors wrote. Trump seems unlikely to bridge the gap in terms of female voters against Clinton or Bernie Sanders in November.

A Washington Post/ABC poll conducted earlier this month found that three-quarters of women, nearly two-thirds of independents, 80% of young adults, 85% of Hispanics and nearly half of Republicans and Republican-leaning independents view Trump unfavourably. “If Trump secures the Republican nomination, he would start the general election campaign as the least-popular candidate to represent either party in modern times,” the Post reported.

Adding to the sense of lost momentum is the proximity of Tuesday’s Republican primary election in Wisconsin, where Trump would normally be expected to do well among blue collar voters. But the latest polling there shows Cruz in the lead, with Real Clear Politics’s rolling average giving him a three-point advantage, and one poll showing the Texas senator 10 points in front of Trump. A loss for the real estate mogul would give the Republican establishment renewed hope of wresting the nomination away from him at the party’s national convention in July.

Kasich suggested that Trump’s abortion gaffe fits a wider pattern that shows he is woefully short of policy knowledge and unprepared for office. “Well, first of all, he united the pro-choice and pro-life groups, which I don’t know how he did that,” he told MSNBC. “But think about this: he said he would use nuclear weapons, maybe in Europe, that we would leave Nato, he would have a supreme court justice who would have to investigate Hillary’s emails, that would be one of the requirements for being a justice. Then he said we should destroy the Geneva conventions.”

Asked by host Joe Scarborough why Trump has been so successful at the polls, Kasich replied: “We know why. We all know because he’s tapped into a frustration and an anger that people have had about: my job is not very good, it’s not secure, my wages are not going anywhere, and my kid’s got a college education and they’re living in my basement.”

And some believe that, once again, this will count more among Trump’s loyal supporters, who are concerned about their own economic frustrations. George Ajjan, a Republican strategist, said: “Much to the chagrin of Republican insiders and conservative stalwarts, even the most putrid, self-serving backpedalling like Trump’s on abortion is not going to significantly dent his standing in the eyes of the frustrated Joe Bloggs, whose willingness to cast a protest vote underlies Trump’s success.

“As with his other gaffes, the Democrats will put it to good use as a motivator of their own base, but abortion is a largely overrated issue when November comes round and votes are actually cast.”