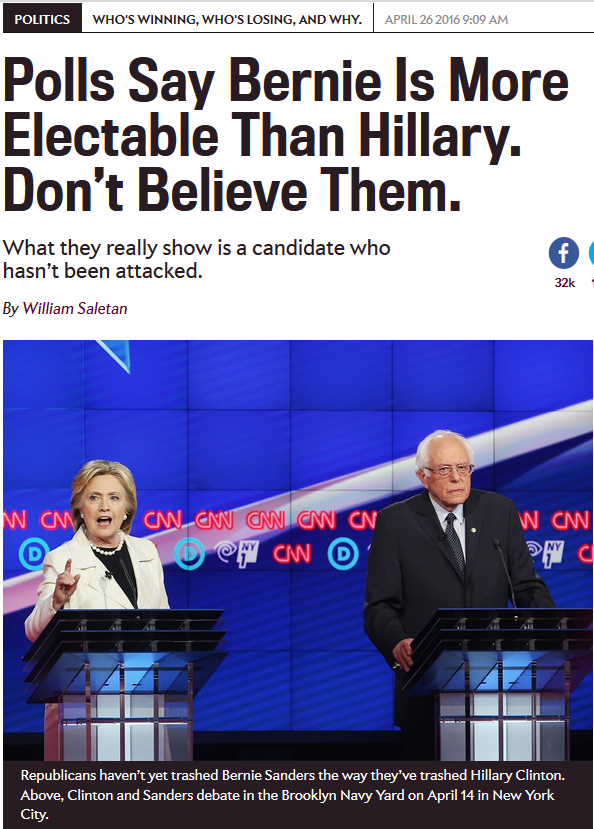 There was a debate last spring, when the Sanders/Clinton race was at its most heated, as to whether Bernie Sanders’ consistently out-polling Hillary Clinton was to be taken as a serious consideration in favor of his nomination. Before, during and after the race was competitive, this was the Vermont senator’s strongest argument: He was out-polling Trump in the general election by an average of 10 or so points, whereas Clinton was only slightly ahead. His favorables were also much higher, often with a spread as much as 25 points.

Never mind, the pundits said—Clinton had been “vetted” and Sanders had not:

1) As we noted in May (FAIR.org, 5/25/16), Sanders had, demonstrably, been vetted. Despite the many pundits cleverly framing the issue as “GOP attacks”, Sanders had been thoroughly vetted by the establishment center, in equally hostile terms. He’d been grilled about his socialism in the primary debates nine times, been subject to numerous attack ads by Clinton SuperPACs, had a half-dozen negative editorials in the Washington Post, received nonstop criticism from Vox, Slate, New York Magazine and MSNBC.

High-profile pro-Clinton pundits such as Joan Walsh, Joy Ann Reid, Jonathan Capehart, Jonathan Chait and others routinely took to social media to spin for Clinton and dismiss Sanders, and all major papers–New York Times, Boston Globe, Chicago Sun-Times, New York Daily News, LA Times, Las Vegas Sun and Rolling Stone—endorsed Clinton, and in doing so criticized Sanders. To saying nothing of the fact that every article complaining that Sanders had not been vetted, complete with “hypothetical” GOP attacks, were themselves a form of vetting.

The idea that Sanders had not been “properly examined” was pure dogma, asserted by pundits with hardly any critical thought. It was true because Important People in Important Media Outlets simply said it was. Most in the media failed to meaningfully push back against this dogma, and it was a major contributing factor to the Democrats not nominating someone who, by all available measures, was a stronger candidate than Clinton.

2) The corollary, that Clinton had been entirely vetted, was also a fiction. High profile pro-Clinton pundit and editor of the influential liberal Daily Kos blog Markos Moulitsas insisted in May that “current polling has Clinton’s negatives baked in. They are her floor.” But this made little sense. As we noted at the time:

But Clinton also argued this back in January, when she insisted she was “vetted,”and since that time, her unfavorable-to-favorable spread has widened by roughly 14 points. Since she announced her campaign, her favorable/unfavorable gap has increased by almost 20 points.  One may argue this is due to increased attention by the GOP and Sanders, but at some point we have a boy-who-cried-wolf problem: Was Clinton fully “vetted” in May 2015, January 2016 or is she now?

While it’s true her unfavorables stayed roughly the same, this didn’t mean waves of consequential negative coverage wouldn’t keep coming: WikiLeaksrevelations of campaign collusion with the DNC, questions about her health and a comment calling half of all Trump supporters “deplorables” all lost her several news cycles. The point is not that Clinton as a candidate isn’t allowed to have bad press–it’s that thinking adults claimed, based on some vague notion of “vetting,” that all of her bad press days were behind her.

Then there was the fact that Clinton was currently under FBI criminal investigation. A wild card that made possible the Comey October Surprise—fair or not—but nonetheless was overlooked in the “Clinton has hit her floor of dislike” arguments. How could one possibly argue Clinton had been fully vetted when an entirely secret Department of Justice inquiry, complete with subpoena power and search warrants, was ongoing? 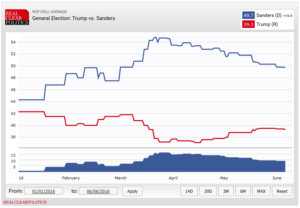 Glaring inconsistencies in these arguments were overlooked with little explanation. Clinton was the party’s choice and everyone had to just get in line, cognitive dissonance be damned. As FAIR noted at the time:

But dismissing a major indicator of popularity like polling—a key tool of campaign journalism in virtually all other contexts—due to vague, handwaving claims of unvettedness comes across as far more a convenient talking point than an earnestly arrived-at conclusion.

And that’s exactly what it was—an empty talking point meant to gaslight readers in the face of overwhelming polling data. “Electability” arguments, it ought to be noted, were also leveled against the current president-elect. These too were based more on mythology than evidence.

Above all, these concepts were far more about simply asserting “truth” than seeking it, in hopes no one would have the time or capacity to push back. The words chose the meaning, not the other way around, and Clinton was “electable” and “vetted” simply by repetition; any deviation or examination of this script was from progressive outlets like Jacobin and Huffington Post.Throughout the campaign, this inevitability posture was a matter of religious conviction that spread largely unchecked–and, as such, may have helped contribute to Trump’s improbable victory.