On January 19, 2009—the day before Barack Obama was sworn in as president—Fox News aired the first episode of Glenn Beck. Obama was a polished representative of the multicultural values that the conservative movement had fought to defeat for decades, and  Beck was the perfect expression of right-wing rage and frustration with him: The eponymous host alternated between anger, conspiracy theories and sobbing. Beck’s tenure at the channel didn’t last long; Fox News chair and CEO Roger Ailes declined to renew his contract in early 2011. But by that point, the GOP had won back the House of Representatives in the 2010 Tea Party wave, a right-wing backlash movement that owed at least some of its success to Beck’s overly earnest mugging.

Beck’s hire signaled to the network’s base and the country at large the direction Fox would take as a reaction to Obama’s election: The network was prepared to spend the next four to eight years in constant opposition to the newly elected president, with no angle of attack too extreme.

Eight years later, after a very different election result, at a different moment for the country and the network, Fox is once again signaling its priorities to an incoming administration: After a number of high-profile dust-ups with Trump, including the candidate skipping two network-hosted primary debates in January and March, and his infamous “blood coming out of her whatever” comment about the channel’s star anchor Megyn Kelly, the network appears poised to deliver mostly uncritical support to the new president for at least the next four years.

Fox is once again telegraphing its approach to a new administration by providing an elevated platform for an ascendant right-wing media figure. But this time, it’s Fox‘s own Sean Hannity.

Hannity’s star is rising like never before. His brand of right-wing anger dominated every aspect of conservative politics in 2016, from the election to the ongoing upheaval at Fox. Hannity, the pundit’s 10 p.m. show, has been through enough changes and slot switches that the show is hardly recognizable from its Bush-era iteration, Hannity and Colmes (Extra!, 11–12/03), and now functions as the network’s primary Trump advocacy program. 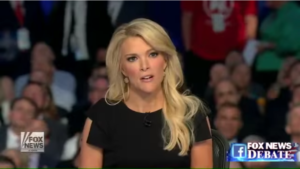 As the comparatively more-measured Kelly leaves the Fox news desk for NBC, Hannity’s more nakedly toxic version of conservatism is virtually unchallenged at the network. Kelly’s faux-professionalism allowed her to gloss a layer of polish over what Jamelle Bouie (Slate, 1/4/17) described as her “racial demagoguery.” Hannity, on the other hand, aggressively mocks and belittles social justice movements, scoffs at progressive activism and concentrates much of its criticism at African-Americans and other minorities (Extra!, 9/13).

Kelly’s legalistic delivery allowed her to build her career on the back of a manufactured scandal over the New Black Panthers and let her wriggle out of much of the backlash for her December 2013 declaration that “Santa is what is he is, which is white.”

The news that Kelly was leaving the network for NBC on Tuesday set off an internal staffing earthquake at Fox. Kelly had long been promoted as the shining star in the conservative news network’s stable. She landed the coveted 9 p.m. slot in 2013 at the expense of—you guessed it—Hannity, whose show was bumped to the 10 p.m. hour to make room for his rival.

In October, though Kelly snagged the top spot, Hannity showed the greatest improvement in numbers, up 65 percent for the year. Hannity’s rise in the ratings, combined with Kelly’s rocky relationship with Trump, made what’s happening at the network now predictable with the gift of 20/20 hindsight.

First, Ailes, the network’s longtime chair, was forced out after afternoon anchor Gretchen Carlson accused him of sexual harassment on her way out the door. Carlson’s accusations led other women at the network, including Kelly, to disclose stories of abuse. As the PR nightmare became too much for Fox owner Rupert Murdoch to handle, Ailes was dismissed, and the Murdoch family came to retake control of the news channel.

Once Ailes was gone, clauses in on-air talent contracts kicked in. Longtime stars like Hannity and Greta Van Susteren could leave the channel without breaking contract if they did so within a certain time frame of the chair’s departure. Van Susteren took advantage of the clause; Hannity remained at Fox.

After news veteran Brit Hume subbed for Van Susteren’s 7 p.m. spot, Daily Caller founder and frequent Hannity sub Tucker Carlson was called up to permanently fill the hour. Carlson, a vociferous Trump supporter despite his image as a bowtie-wearing establishmentarian, quickly established a name for himself through combative interviews with the likes of Newsweek’s Kurt Eichenwald and Teen Vogue’s Lauren Duca, and a one-on-one with Intercept co-founder Glenn Greenwald.

On Thursday, news broke that Van Susteren will join MSNBC for a 6 p.m. show named On the Record, replacing the canceled With All Due Respect. Hours later, Fox announced Tucker would be taking over Kelly’s 9 p.m. slot.

Despite (or because of) a reputation for bottom-feeding pandering, Fox & Friends, the program that provided Trump with a platform every Monday morning for years, maintains its grip on morning cable news ratings. The show has been a reliable mouthpiece for some of the more extreme positions taken by the American right: Co-host Brian Kilmeade, for example, said American bloodlines were no longer pure because of marriages with “other species and ethnics.” In the video, you can see the aforementioned Gretchen Carlson nervously laughing with him. 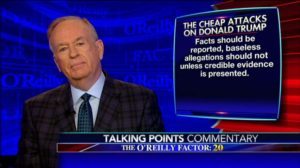 It’s all adding up to a new media reality at 1211 Sixth Avenue. With Kelly, Carlson and Van Susteren gone, the channel has lost three of its most prominent female faces in six months. The channel’s nightly old guard has been reduced to three veteran programs: the 6 p.m. “hard news” program Special Report With Bret Baier and, for “opinion,” the 8 p.m. O’Reilly Factor and 10 p.m. Hannity

O’Reilly sometimes played the role of loyal opposition during the Obama years; the longtime Fox anchor has interviewed the president three times over the past eight years, including two pre–Super Bowl exclusives in 2011 and 2014. Even so, O’Reilly helped boost the careers of Eric Bolling and Jesse Watters, a birther and Orientalist, respectively, giving the former the opportunity to substitute-host for the O’Reilly Factor and the latter his own recurring segment on the program—which has now led to the attack artist getting his own weekly Fox show.

And now O’Reilly, the perennial champion of Fox ratings, is ingratiating himself to Trump in advance of the inauguration. This was evident on January 3, when he complained to Fox analyst Charles Krauthammer about the lack of Hollywood stars performing at the inauguration. (Krauthammer dismissed O’Reilly’s distress over the absence of stars, saying, “You are not summoned to perform for the king.”)

It seems to be part of a shift in the network towards Trump’s particular brand of populist conservatism. The channel as a whole was less warm to the candidate during the campaign. The first question Trump was asked on a debate stage during his rise to the highest office in the nation was from Kelly (8/6/15), who asked him about his history of offensive comments about women.

The Five‘s Greg Gutfeld described the inter-network tension over the candidate in March 2016 as omnipresent. “On any given day, we have tension over this nomination, over this candidate,” Gutfeld said. “You can look at our network as a whole.”

Even Fox‘s parent company NewsCorp founder and executive chair Rupert Murdoch had issues with how the network was handling its responsibilities. Murdoch “didn’t like that Ailes was putting Fox so squarely behind the candidacy of Donald Trump” during the campaign, media watcher Gabriel Sherman reported (New York, 9/2/16). Murdoch, the acting CEO of Fox after Ailes’ ouster, has worked to repair the relationship with the president-elect, even visiting Trump Tower ten days after the election (Hill, 11/18/16).

Hannity, on the other hand, has been consistent. The pundit made no secret of his allegiance to Trump as the real-estate mogul campaigned for the Republican nomination and, later, the presidency. Hannity  interviewed Trump multiple times over the campaign, and even appeared in a campaign video for the nominee in September. (He was reprimanded.)

Hannity’s devotion to Trump inspired Kelly to casually insult her colleague during a post-debate chat with the Republican nominee on September 26:

We’ve got Trump speaking to our own Sean Hannity. We’ll see whether he speaks to the journalists in this room after that interview.

Trump and Hannity’s personalities mirror one another’s in many ways. Both are right-wing entertainment figures from the New York City metro area. Both have a pronounced antipathy to minorities in general and black people in particular (FAIR.org, 5/6/11; Extra!, 9/13).

Each has a pathological need to impress his masculinity on his surroundings. Where Hannity relentlessly touts his MMA progress and feels the need to awkwardly throw a football offscreen in between every segment, Trump brags about his past athletic prowess in school: “I was captain of the baseball team. I was supposed to be a professional baseball player.”

And both men know how to hold a grudge: Trump has railed against Rosie O’Donnell ever since she belittled him in December 2006 on The View. Hannity has never forgiven Obama press secretary Robert Gibbs for confronting him in 2008 debate over Hannity giving a platform to an antisemite to attack then-candidate Obama.

Trump and Hannity’s bigotry and bluster would be a regrettable commonality in two men of modest means and power. But now that Trump is poised to become president, the powers of the office will be centered on a man whose political touchstone is a talkshow host whose particular mix of rage and racial resentment are setting the tone for the nation’s most popular cable news channel.

Fox is sending a message to a Trump-governed United States with its programming choices: We’re with him. That message is likely to resonate for the length of the billionaire’s presidency.

Eoin Higgins is a journalist and historian from Western Massachusetts. You can find more of his work at eoinhiggins.com and follow him on twitter at @EoinHiggins_.