With the New York Times finally agreeing to name politicians’ lies where they belong—in the headlines of the stories where they first occur—it’s time to end the failed experiment of factchecking columns. Not only do these projects give the false impression that checking facts is a sidelight rather than central to the journalistic mission, they are fatally compromised by  corporate media’s interest in maintaining the illusion of impartiality. As FactCheck.org’s Brooks Jackson (Time, 10/9/12) said, in an admission that should have put paid to the whole enterprise:

Even if we could come up with a scholarly and factual way to say that one candidate is being more deceptive than another, I think we probably wouldn’t just because it would look like we were endorsing the other candidate.

Unmoored for commercial reasons from any hard and fast standards for what constitutes a fact, media factologists are free to follow their own political whims (or those of their outlets). Which seems to be what’s going on in a recent Washington Post factchecking effort by Glenn Kessler, “Bernie Sanders’ Claim That ‘36,000 People Will Die Yearly’ if Obamacare Is Repealed” (1/14/17).

The Post, just to set the stage, is a paper with a serious animus against the junior senator from Vermont—once running 16 negative stories on Sanders in 16 hours, and on another occasion squeezing four separate Sanders-bashing articles out of one dubious study. So it isn’t surprising to see Kessler giving “four Pinocchios” (the highest score, reserved for “whoppers”) to Sanders’ warning that “as Republicans try to repeal the Affordable Care Act, they should be reminded every day that 36,000 people will die yearly as a result.”

Sanders’ number came from Think Progress (12/7/16), which in turn derived its forecast of how many people could lose insurance under Obamacare from an Urban Institute report, and its estimate of the effect of insurance on mortality from an Annals of Internal Medicine study (5/6/14). So—a pretty solidly grounded political claim? Ah, sorry, you don’t understand the rules of political speech—as applied by the Washington Post to Bernie Sanders.

You see, Sanders in his tweet didn’t include all the academic qualifiers that occurred in the original Annals study. (It was a study of Massachusetts, not the whole country!) And Sanders’ warning was based on the “pretty big assumption” that the ACA will not be replaced with a brand new GOP-designed program—the barest outlines of which have yet to be described.

This kind of “fuzzy math” generally merits three Pinocchios, Kessler said. What “tips this claim into four-Pinocchio territory,” though, was the fact that Sanders expressed a prediction in the future tense: He said that people “will die” rather than “could die.” I would remind Kessler that every statement about the future is necessarily uncertain, and therefore every use by a politician of the future tense should be awarded an extra Pinocchio. 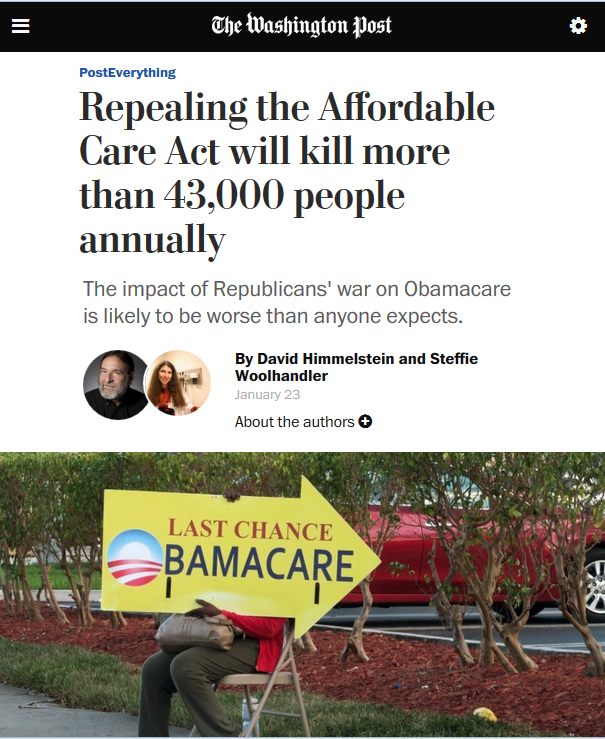 Fortunately, an antidote to this nonsense appeared in the Washington Post itself, in the form of an op-ed (1/23/17) that appeared under the headline, “Repealing the Affordable Care Act will Kill More Than 43,000 people annually.” It was written by Steffie Woolhandler and David Himmelstein, two doctors who are professors at Hunter College and lecturers at Harvard Med School; “for more than 30 years,” they note, they have “studied how death rates are affected by changes in healthcare coverage.” Their take on ACA repeal:

The biggest and most definitive study of what happens to death rates when Medicaid coverage is expanded, published in the New England Journal of Medicine, found that for every 455 people who gained coverage across several states, one life was saved per year. Applying that figure to even a conservative estimate of 20 million losing coverage in the event of an ACA repeal yields an estimate of 43,956 deaths annually.

They noted, as an example of what looks like “cautious optimism about the effect of a potential repeal,” that “the Washington Post’s Glenn Kessler awarded Sen. Bernie Sanders (I-Vt.) four Pinocchios for claiming that 36,000 people a year will die if the ACA is repealed,” but said “such optimism is overblown”:

Kessler…chides Sanders for assuming that repeal would leave many millions uninsured, because Kessler presumes that the Republicans would replace the ACA with reforms that preserve coverage. But while repeal seems highly likely (indeed, it’s already underway using a legislative vehicle that requires only 50 Senate votes), replacement (which would require 60 votes) is much less certain.

Kessler’s four-Pinocchio judgment on Sanders still stands. Perhaps he’ll run a follow-up piece awarding some number of Pinocchios to the doctors for daring to question the ruling of a media factchecker on the flimsy basis of 60 combined years of academic research into the question at hand?

Jim Naureckas is the editor of FAIR.org. You can find him on Twitter: @JNaureckas.

Messages can be sent to the Washington Post at letters@washpost.com, or via Twitter @washingtonpost. Please remember that respectful communication is the most effective.